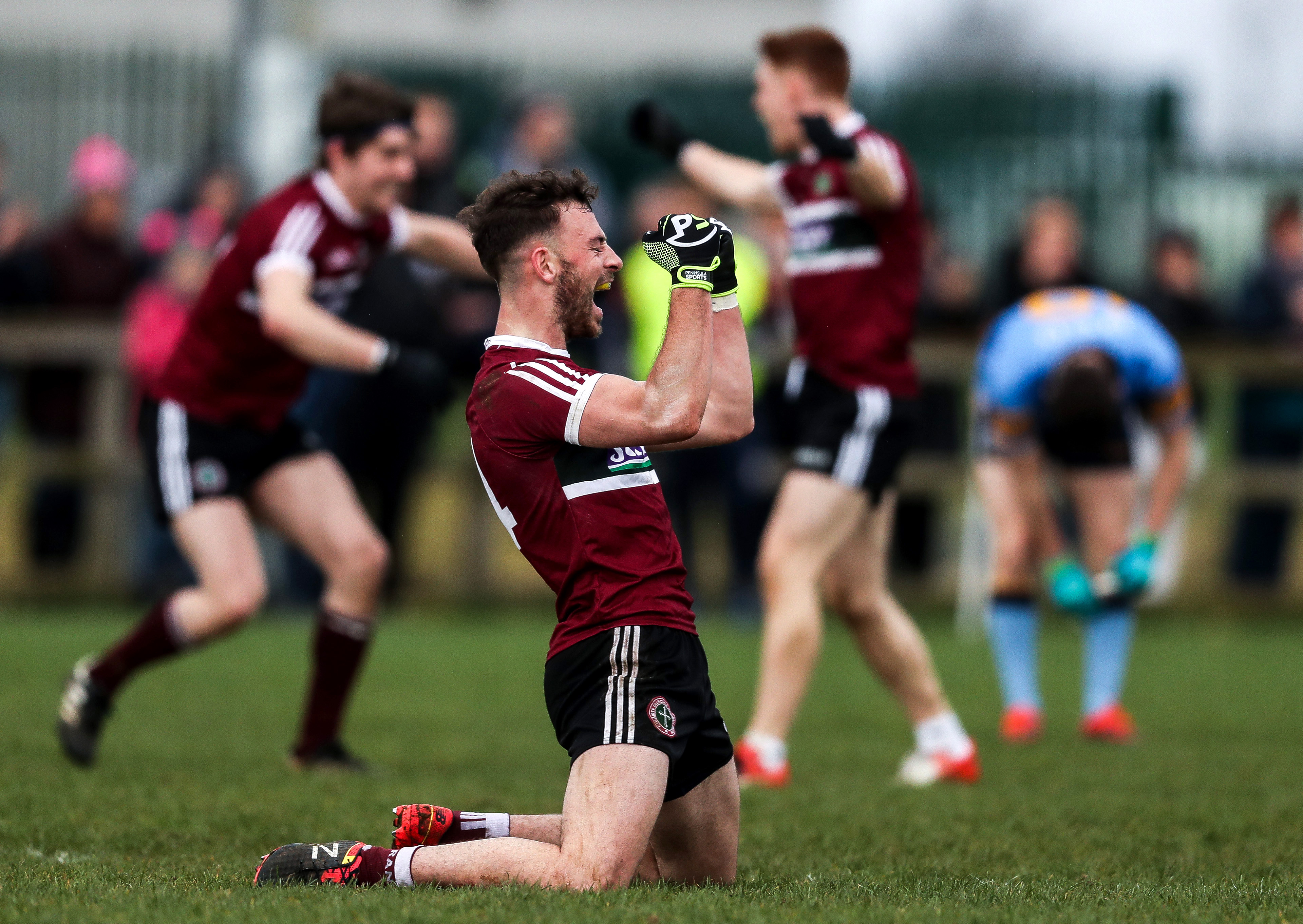 NATIONAL hunt jockey Mick Fitzgerald titled his autobiography ‘Better than Sex’ after a famous quote he’d given Des Lynam live on BBC after winning the 1996 Grand National on Rough Quest.

Putting sporting success into context can be tricky but Belfast’s latest All-Ireland champion reckons winning the Sigerson Cup is comparable to childbirth - even if his mother disagrees.

Matthew Fitzpatrick was part of the victorious St Mary’s side which claimed the Sigerson Cup last weekend with a thrilling win over defending champions University College Dublin (UCD) in Mayo.

The teacher training college on the Falls Road had been huge underdogs heading into the Sigerson weekend but recovered from the concession of two early goals in both their semi-final win over University College Cork (UCC) and Saturday’s decider against UCD. Fitzpatrick says the magnitude of the win still hasn’t sunk in. “It is strange but in a good way,” said Fitzpatrick.

“Obviously we wanted to win and we believed we were good enough to win. When you win an All-Ireland title there is a feeling of shock. It hasn’t really sunk in yet. It will take a few more days.

“It is massive for us. “I can’t speak highly enough of everyone there, Paddy (Tally) and all his team. It could be the highlight of my career.

“No disrespect to anyone with kids, people will say your child being born is the best feeling - I don’t buy that after last Saturday! “I said that to my Ma the other day and she was saying I haven’t had kids yet but I’ll eat my hat if it feels better than that.”

In contrast, St Mary’s have just over 1,000 students with most of their key players fringe players on their respective county teams. Indeed, only Fitzpatrick (Antrim), Cathal McShane (Tyrone) and Kevin McKernan (Down) are established county players, something which makes last weekend’s All-Ireland success even more remarkable.

“It is frightening that way in terms of stats but it shows what can be achieved with a bit of belief and the right structures and heart. That’s what St Mary’s is all about,” added Fitzpatrick. “Really and truthfully, we shouldn’t be competing at Sigerson level when you look at other sides the same size as St Mary’s - they aren’t able to compete.

“It is a testament to everyone at the college that St Mary’s are able to play at that level. “St Mary’s have a lot of club players, guys who are 18 or 19. They are guys who are maybe knocking about county teams. Playing with St Mary’s gives you the confidence to go on and be a county player.

“It is about being a team and being part of a tight knit group. We are always written off but that’s understandable when we are coming up against sides with the likes of Jack McCaffery playing.”

Fitzpatrick bagged a first half goal as St Mary’s battled back from the concession of two early goals to defeat UCC 2-7 to 2-6 in last Friday’s semi-final. Lightening struck twice for the Ranch in the final as, within minutes, they found themselves two goals down with UCD’s Colm Basquel landing both majors.

Yet, Paddy Tally’s men never flinched, never deviated from their gameplan and they were soon back level with Armagh and Crossmaglen midfielder Oisin O’Neill leading the charge while Omagh and Tyrone star Conor Meyler seemed to cover every blade of grass as the underdogs took a 0-9 to 2-1 lead into the half-time break.

Playing against the wind, two points didn’t seem a big enough advantage but Fitzpatrick and his colleagues dug deep, tackling like men possessed, to grind out a 0-13 to 2-6 win. Despite their heroics, Fitzpatrick insists the players never panicked after their early setback.

“It didn’t faze me and it didn’t faze the other boys on the team,” added the St John’s clubman. “It was ‘Jesus, it has happened again’ but we hit nine scores in a row. We do a lot of psychological work with Ciaran Kearney.

“Before the game, we break down the things that can happen in matches and what effect it is going to have and how we deal with it. “There is belief in the management and belief in the players. We know we have some class players and there was never a moment when we thought we were done. We never gave up because we trusted other.

“We were asked why we were doing it and everyone said we are doing it for our family, our friends, our teachers and all the coaches that have helped us down through the years. It isn’t just about us.”

He added: “It is just about focus and telling yourself that there is still all to play for. That was the case on Friday and Saturday when we were two goals down. There was nothing set in stone. “If you adapt that never-say-die attitude, there is proof that it works. “You mightn’t always come back but you can’t give up.”

Fitzpatrick also reserved special praise for St Mary’s boss Paddy Tally. “He is brilliant - I can’t speak highly enough of him,” said Fitzpatrick. “Personally he has done a lot for me in terms of football and I sure other guys at St Mary’s would say the same thing.

“He knows his players and he gives you belief. It is hard to pinpoint but he is never far away. He deserves this more than anyone. His coaching, his tactics and everything he has done for St Mary’s, he deserved it a few years ago - I am over the moon for him. Knowing Paddy though, he will be already be thinking about defending the title next year. After the dust settles, I am sure that will be the next thing on his mind.”

For Fitzpatrick, his immediate focus will switch to Sunday’s National League tie against Sligo in Corrigan Park and a must win game for Antrim with the Saffrons hoping to harness the spirit and determination illustrated by St Mary’s last weekend as they too battle against the odds.