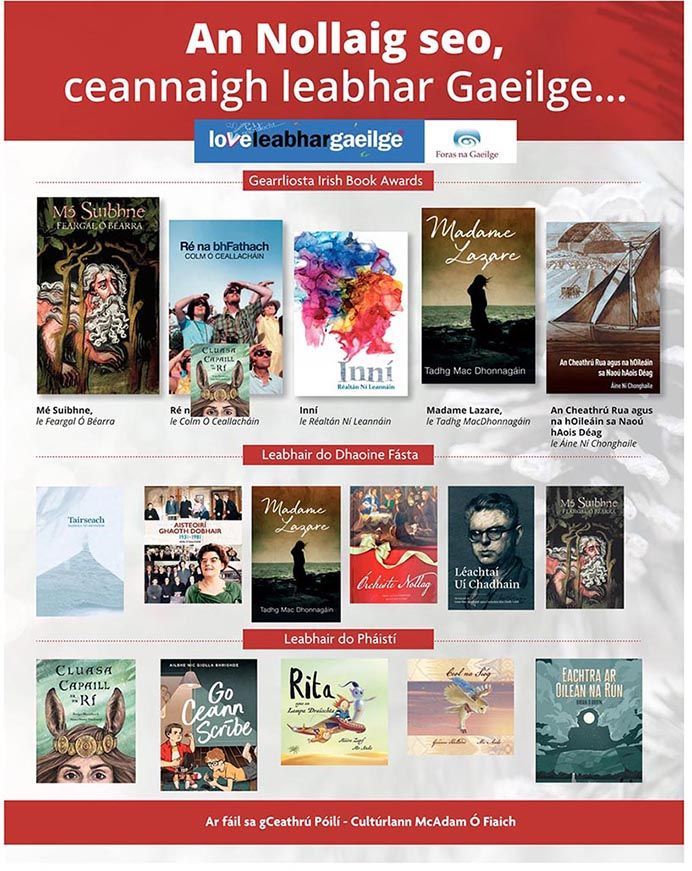 There are a wide range of categories and the shortlist for every one this year is very competitive but one category that’s rapidly making it’s way up the literary scene – is the Irish language book scene.

The Irish language industry has shown growth levels of over 10% in readership over the past three years alone and this year, there are five fantastic titles shortlisted for the Best Irish Language Book of the Year sponsored by LoveLeabharGaeilge, illustrating the strength of the expanding interest in Irish language reading.

The five shortlisted books are as follows:

An Cheathrú Rua agus na hOileáin sa Naoú hAois Déag, by Áine Ní Chonghaile, which gives an account of the lives of the south Connemara communities of Carraroe and the Islands during the 19th Century. Áine herself is completing her Ph.D in Irish History in NUIG where she was already awarded both a B.A and M.A degree in history previously. She also has experience in teaching the Irish language.

Inní by Réaltán Ní Leannáin, includes a captivating collection of Irish language short stories that steers us skillfully through deceit, trickery and duplicity. Réaltán also has experience in teaching the Irish language and was the first Irish language writer to go abroad with the OtherWords bursary scheme in 2016.

Madame Lazare, by Tadhg MacDhonnagáin, brings us on a journey from Paris to the Atlantic coast of Ireland, focusing on the story of Hana Lazare. As she ages and her mind becomes confused, she shares details of her past that surprises her granddaughter Levana which leads her to question everything her grandmother had ever told her. Tadhg writes books, screenplays and songs for both adults and children and his work has been translated into a range of different languages.

Mé Suibhne, by Feargal Ó Béarra, is a retelling of the old Irish tale, Buile Shuibhne. It is a story about mental illness, confrontation with the Church and the tragedy of a man. This is Fergal’s second revamp of a legendary Irish language story – winning Book of the Year in 2019 with Tromdhamh Guaire.

And last but not least, Ré na bhFathach le Colm Ó Ceallacháin, a story that deals with the various truths and lies of life – from the present to the past. Colm has won Oireachtas prizes as well as Arts Council awards for his work.

The Irish Book Awards are aimed at promoting and celebrating excellence in Irish writing and are industry recognised awards. The Irish category is one of eighteen and includes short stories, novels and non-fiction. Previous winners of this category include: Tairngreacht, by Prionsias Mac a Bhaird, Conaire Mór, by Diarmuid Johnson and Cnámh, by Eoghan MacGiolla Bhríde.

Even though only one can win Best Irish Language Book of the Year, it’s important to support all Irish language books – so vote, read, but most importantly- léamh as Gaeilge!