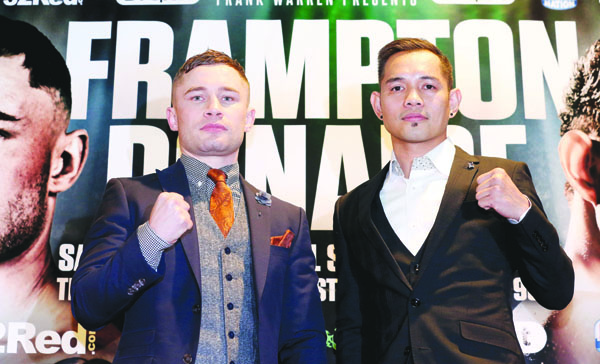 CARL Frampton and Nonito Donaire both admit their April 21 clash at the SSE Arena will be make-or-break in terms of world title aspirations with the winner set for a summer title tile, while it could be the end of the line for the loser of their featherweight dust-up.

The former World Fighters of the Year met at a press conference at the Europa Hotel yesterday (Wednesday) and while it was all very courteous on a cold day in the city, the heat will be turned up when they clash in spring.

Both men are coming off wins following world title defeats with Frampton out-pointing Horacio Garcia back in November following his WBA featherweight title loss to Leo Santa Cruz almost a year ago, while the ‘Filipino Flash’ was also a points winer when defeating Ruben Garcia Hernandez on points following his WBO super-bantamweight defeat to Jessie Magdaleno in November 2016.

While no world title will be on the line on April 21, this is a fight worthy of such an accolade yet only one will move on to challenge one of the belt holders later in the year and both are fully aware of the importance of victory.
“Nonito Donaire is a future Hall of Famer, a fantastic fighter,” said Frampton who, for once, didn’t have universal support in the room.

“First of all, I have noticed a lot of Filipino faces in the crowd. This is the most support an away fighter has had at a press conference.

“For the last couple of years, maybe four I have been approached by Filipino people on the street asking about Donaire and is a fight that could happen, so he’s going to have a big fan base.

“I need fights like this to get up for and I need names so what better name than Nonito Donaire?

“He is an amazing talent, a four-weight world champion, He can punch. You can talk about people who can punch, but he doesn’t just know them over, he put guys to sleep before. That gives me a bit of a fear factor and that’s why I will be at my best.”

Warm
California resident, Donaire is accustomed to warm weather and while he admits the recent cold snap in Belfast has caught him out a little, he said he has been touched by the warm welcome he has received.

While past Frampton opponents have been taken aback by the hostile reception on fight night, the 35 year-old has been there and done it all, so the idea of fighting in an inhospitable environment in a way appeals as the four-weight world champions believes he will feed off the crowd’s energy, positive or negative.

“When I got into Belfast it was definitely cold,” he noted.

“One thing I did find was the warmth and the welcome from the amazing people I’ve come across.

“Of course, the Filipino community has been so warm to me, but the people were so warm to me knowing who I was facing. They still treated me with respect and love. I have been blown away by how kind you guys are.

“There will be boos and yelling, but hat’s what support is about and what loyalty is about. I just want to say thank you for the boos which fuel me to be inspired and the cheers too.

“Whatever situation you have in life, you are grateful for everything so I’m grateful and excited at the same time.”

Motivation shouldn’t be in short supply in the night for both men who top a bill that already has three mouth-watering all-Irish fights added with Jono Carroll putting his IBF European East/West title on the line against Marco McCullough, light-welterweights Tyrone McKenna and Phil Sutcliffe Jnr meeting in an eagerly anticipated bout and middleweights Conrad Cummings and Luke Keeler meeting for Cummings’ WBO European title.

However, the main event has certainly grabbed the attention with tickets already almost sold out as Frampton takes a huge risk against the vastly talented Donaire when he could have taken a less risky assignment given a world title fight awaits.

“My objective is to win a world title and I’m hoping to fight for one in the summer so what better opponent to get you ready for something like that than Nonito Donaire?” asked ‘The Jackal’.

“Frank Warren is talking about trying to make this fight a final eliminator for the WBO as well so that’s another option.

“(Lee) Selby and (Josh) Warrington can happen, we’re all on the same team. (Scott) Quigg or (Oscar) Valdez – the winner of that could happen if this is a WBO final eliminator, but these are all things that are in the future and there’s only one fight I’m focussed on at the minute.

“If I don’t win this fight, these things don’t happens so there’s only one guy on my mind at the minute and that’s Donaire.”

There is no need to trash talking and given both men have a reputation for conducting themselves with grace, it was a case of compliments rather than insults flying at the top table.

Respect
Donaire’s respect for the North Belfast man has brought him to the city and like Frampton, sees an opportunity to get back to the top of the sport.

Aside from an early defeat in his career, Donaire’s other losses apart from that Magdaleno reverse have come to Guillermo Rigondeaux and Nicholas Walters, so it has taken top-class opposition to better him.

Frampton is a proven A-Lister, so will be fancied to get the win and Donaire is under no illusions as the size of task ahead.
“Carl is an incredible fighter,” acknowledged the Filipino.

“He has done well against Santa Cruz, so he’s not someone you can take lightly. You have to be 100 per cent or there’s no turning back.

“We need to have that voice in the back of your heads saying ‘this guy’s tough’ and that anything can happen. That allows the warrior within us to come out and that’s something that will show on April 21.

“One thing I know from looking into Carl’s eyes is that we both are warriors and we do have it to come out in this fight.”

Memorable
It promises to be a memorable night on April 21 with two elite fighters trading leather with their career’s on the line.

Frampton’s dream has always been a huge night at Windsor Park. That could disappear should he come unstuck, so he is fully focussed and is anticipating an atmosphere like never before in his favourite venue.

“I desperately want to win this fight and I can see the carrot dangling in front of me of Windsor Park,” he added.

“The fans are passionate and are behind me. I had a bad year last year and split with my former team and who knew how the fans would react, but they have had my back.

“The last fight was the noisiest the Odyssey has ever been against Horacio Garcia and no disrespect to him, he isn’t one of the biggest names in world boxing, but Nonito Donaire is and I think the atmosphere is going to be better than it’s ever been.”