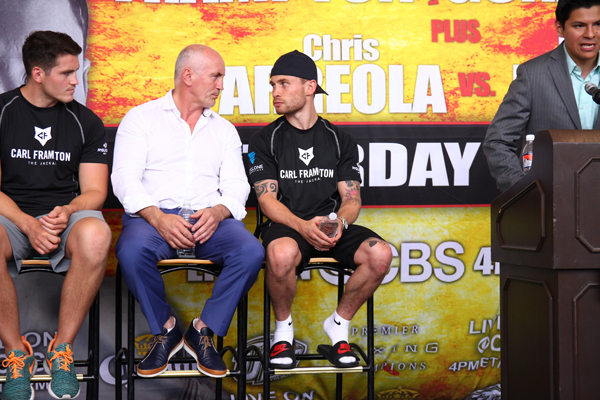 Belfast boxer Carl Frampton (right) is facing legal action from his former trainer and promoter, Cyclone Promotions. Frampton split from Cyclone, his trainer Shane (above left) and manager Barry (above centre) back in August.

Boxing star Carl Frampton is facing legal action from his former trainers Cycle Promotions according to his solicitor.

Mr Frampton parted ways with Barry McGuigan’s Cyclone Promotions in August of this year and linked up with Matthew Macklin’s MTK.

In a statement released yesterday solicitor John Finucane, who is representing the Tigers Bay man, said his client would be ‘counter claiming on a number of grounds’.

“We can confirm that Cyclone Promotions and Blain McGuigan have lodged proceedings against our client Mr Carl Frampton in the High Court, London on November 23 2017.

“Mr Frampton is deeply disappointed that Cyclone Promotions have decided to initiate legal action against him, however he will not only defend this action rigorously but can confirm he will be counter claiming on a number of grounds.”

The statement continued: “Mr Frampton is confident that this process will vindicate his position and reputation, and looks forward to engaging fully in this process to present all aspects of this claim before the court.

“Therefore it would be inappropriate to issue any further comment at this time.”

Since severing his ties with Cyclone Promotions Mr Frampton has won his most recent fight against Mexican Horacio Garcia in Belfast’s SSE Arena in November.

The boxer and his wife are currently en route to Kenya to raise awareness for Trócaire’s Christmas appeal.