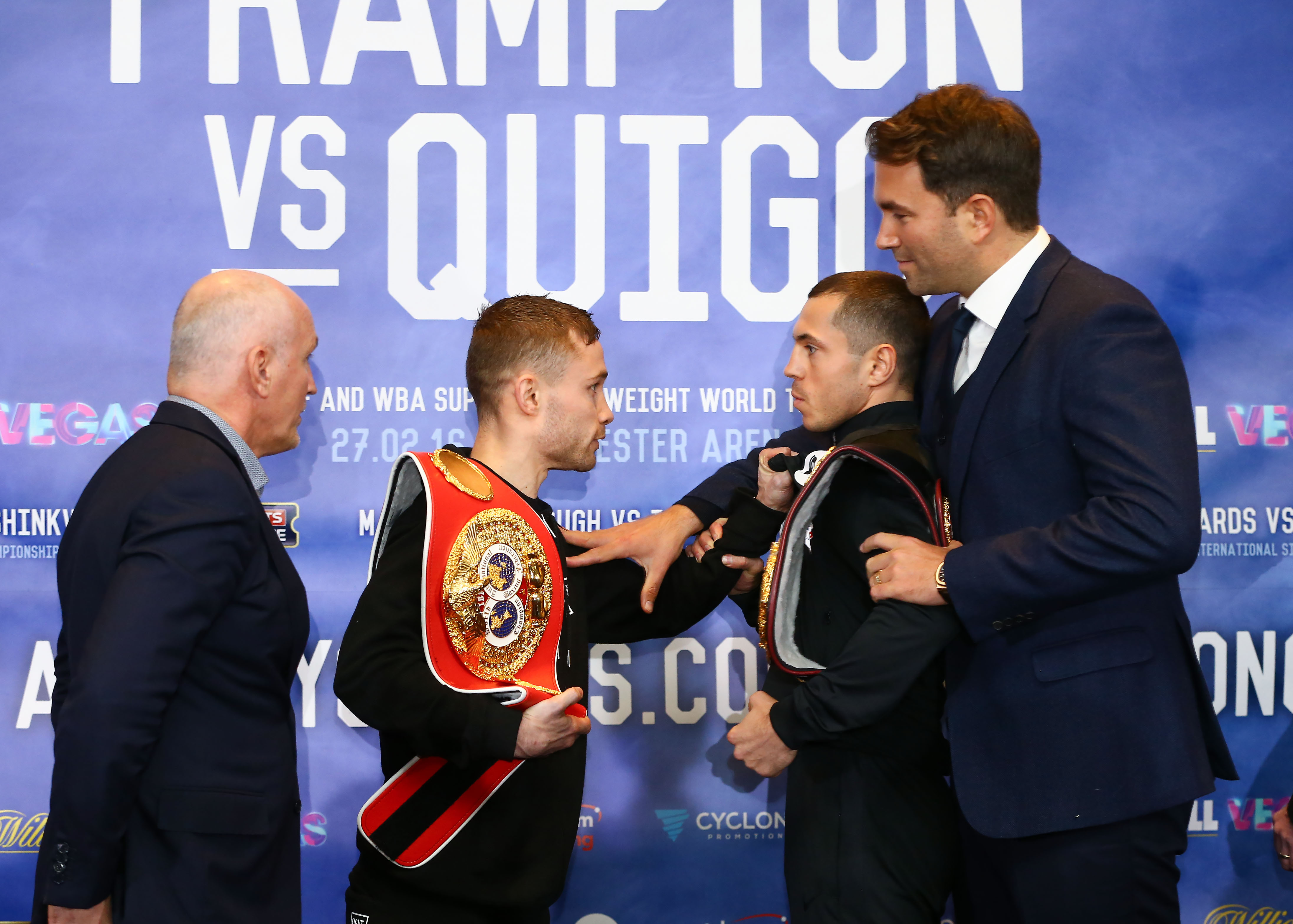 DELAYS. Today (Thursday) has been littered with them.
Having inched through rush hour traffic to arrive in good time for a flight to Manchester ahead of today's final press conference between Carl Frampton and Scott Quigg at the Radisson Blu Edwardian Hotel only to see the board informing a two hour delay, the grey skies mirrored the mood.
However, after it was announced that two hours was now three, patience was wearing thin.
By the time the flight was finally ready to board, it was emerging that frustrations were also beginning to boil over across the Irish Sea.
The press conference, due to begin at 1pm was held up as a dispute between both camps flared up over which dressing room the fighters will use on Saturday.
When it finally began, Frampton - the 'A Side' in this promotion - was adamant he should be afforded the privilege of using the 'home' dressing room, but Quigg - who hails from nearby Bury - insists it should be his.
While such an issue may seem trivial, it is simply part of the mind games of which this fight has had enough to form their own Olympics.
It was an effort from Frampton and his team to get under the skin of Quigg, perhaps some payback for the constant jibes about alleged past gym performances, his last fight in El Paso and the legitimacy of trainer, Shane McGuigan (more about that later).
It was a clear, premeditated ploy, as Frampton accused his rival of being superstitious and therefore "mentally weak".
“It’s my arena, I’m the home fighter, I want the home dressing room,” declared Quigg.
Frampton responded by denying it was a home dressing room, but rather a star dressing room. “I’m contractually the A-side. It’s a question of principle.”
It seemed this had the desired effect for Frampton and his team as for the first time in the build-up, Quigg seemed riled and as both sides bickered, Quigg referred to Blain McGuigan, Frampton's promoter as a "Spice Boy".
As tempers flared, Team Jackal accused Quigg of mental weakness on the issue and Carl played a rendition of the Stevie Wonder classic, Superstition, to emphasise his point.
“Let’s just lock the doors of the star dressing room and we’ll both use another one,” suggested Frampton but Quigg was not for buying. It remains to be seen how the matter will be resolved but undoubtedly, it will.
While there is a huge rivalry between the boxers, the rivalry between the trainers, Shane McGuigan and Joe Gallagher seemed to have taken a life of its own.
Again, Gallagher dismissed Shane McGuigan’s pedigree as a trainer.
“He was a nutritionist a few years ago who asked to help Gerry Storey," claimed Gallagher who criticised Frampton and his team because of what he felt was a lack of respect afforded to his man.
"He’s only famous because of his dad”
McGuigan retorted with a grin: "I am."
One key factor in Saturday's fight will be a little clearer tomorrow (Friday) at the weigh-in and that is how much of an issue is will be for the North Belfast man following his struggles in El Paso.
'The Jackal' claims he is fine and that is will not be an issue to make the 122lbs limit tomorrow.
“Because of the magnitude of this fight, everything had to be perfect. I’ve taken a serious approach, a more serious than anything in the past," he said.
"I had a check weigh-in with the (British Boxing) Board of Control yesterday and my weight was fine. I've done everything right this time because I know I have to and I don't want to lose, that's the bottom line."
Another weight issue comes on Saturday as the IBF only allow an increase of 10lbs overnight and when Quigg was questioned by Blain McGuigan whether this would be a problem for him, the Bury man didn't seem too impressed but on the subject of weight he said: "I believe I will be the bigger man in the ring, but that's not going to win this fight, my boxing ability will."
It was a fiery, yet highly entertaining encounter, ended with the traditional head-to-head between both men that contained an intense stare-down before a pushing match ensued, but both were pulled apart and Frampton verbally lashed out at Quigg's promoter, Eddie Hearn.
Tomorrow's weigh-in at the Manchester Arena, scheduled for around 1pm could well lead to more fireworks ahead of the main event on Saturday.