Fresh from the taste of Euro 2016 glory 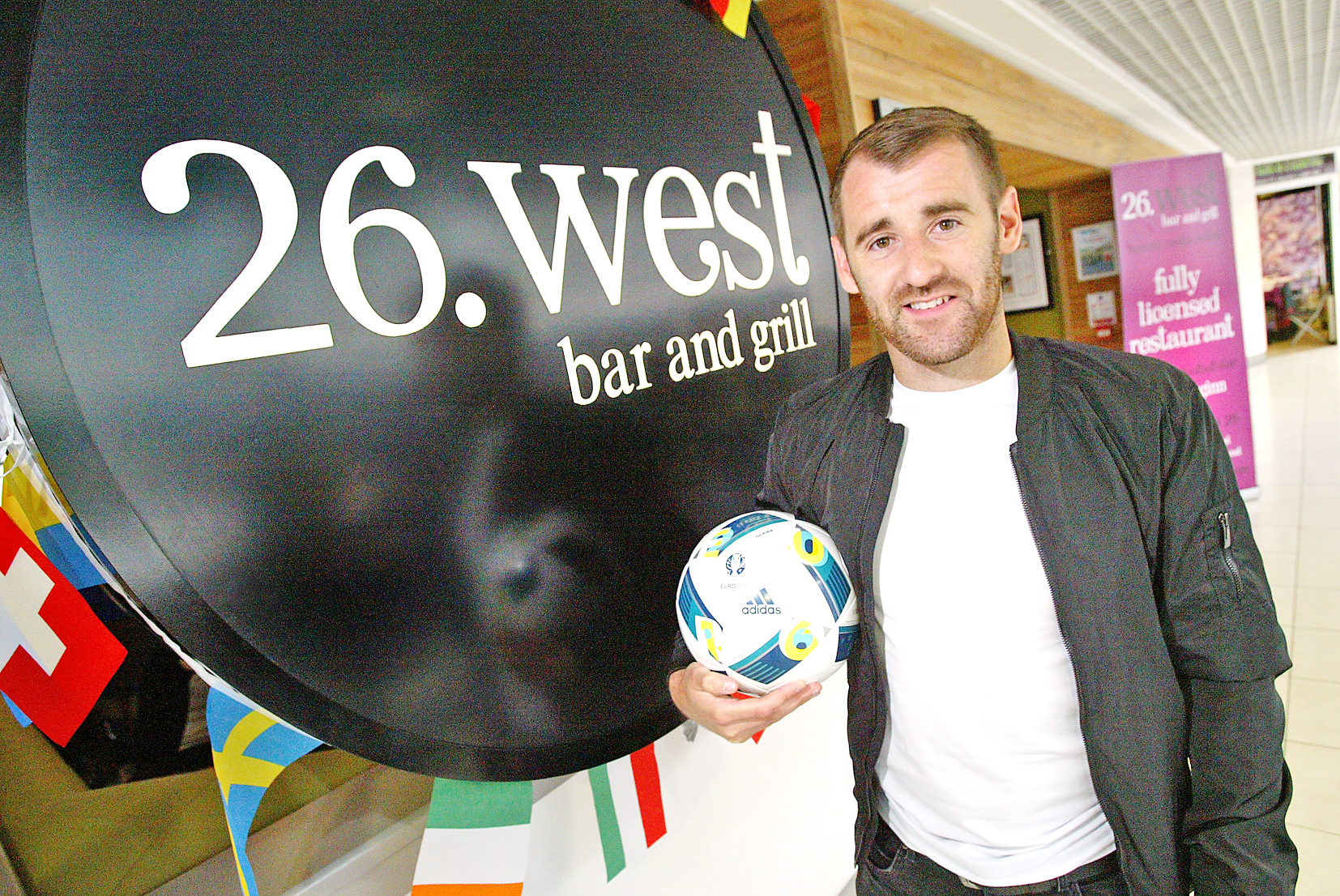 EURO STAR: Niall McGinn was at 26 West for the launch of a new menu for the West Belfast restaurant after a successful Euro 2016 campaign with Northern Ireland

Northern Ireland winger Niall McGinn on a heroic Euro 2016 campaign with Northern Ireland in France, his past days of playing Gaelic football and an upcoming European adventure with Aberdeen...

NO sooner was he off the plane from France and back on home soil, it was a visit to his restaurant earlier this week for one of Northern Ireland’s Euro 2016 heroes.
26 West Bar and Grill was the venue for Niall McGinn on Tuesday morning as he helped launch an exciting new menu for the popular West Belfast restaurant in the Kennedy Centre which was opened by himself and entrepreneurs Gerry Carlile and Sean Duffy.

It was the past three weeks though that were still fresh in the mind of the winger who paid tribute to the support of the GAWA (Green and White Army) home and abroad.
The Donaghmore man and the rest of the squad joined 10,000 adoring fans on Monday night at the Titanic Quarter as fans flocked to welcome their heroes back to Belfast after Northern Ireland’s exit from the tournament following their last-16 defeat to Wales.

Each member of the squad was given their moment on stage with manager Michael O’Neill and captain Steven Davis addressing the fans.

“I’m a bit tired and exhausted. I think the whole experience and campaign was unbelievable,” said McGinn.
“We exceeded expectations- going out there we knew the stadiums, crowds and atmosphere was going to be unbelievable but to actually go there and experience it in person- it was just a fantastic three weeks.

“It was great to build better relationships with the lads. There was better team unity amongst us and it translated into good performances on the pitch.
“The support has been unbelievable. I think when you away you don’t really see how special it was for the fans until we came home on Monday night. Seeing the thousands of fans turn up, it really sunk in how well we have been supported back home as well as over in France.

“It was important to thank the fans for their support throughout the tournament,” he added.

Euro 2016 will live long in the memory of Niall McGinn, who scored the second goal in the 2-0 victory over Ukraine in the group stage, which effectively sealed Northern Ireland’s place in the last 16 and the winger said he was delighted to come off the bench to get on the scoresheet. If Will Grigg was on fire, Niall McGinn was equally as hot.

“I felt good before the game and had good vibes even though I was sitting on the bench,” he explained.
“I thought I was going to get the opportunity to come on when we changed the formation and I managed to get a runout.

“I was buzzing to come on the pitch and get a few minutes but I never thought in a million years I would get on the scoresheet.
“I scored the second goal to finish off a great game. To a man, all the lads were first class and it summed up how good we can be on our day. I’ll remember that night for the rest of my life,” he added.

Indeed in many ways, this summer’s European Championships was a far cry from the modest and humble beginnings of the Donaghmore man who juggled Gaelic football and soccer as a young boy.
McGinn was a promising sporting talent, playing Gaelic football for Donaghmore and Tyrone, winning an All-Ireland Minor title in 2004.

Having started out with Dungannon Swifts, he decided to sign a professional contract with Derry City as he pursued a career in soccer and McGinn insists he has no regrets of choosing one code over the other.

“I was fortunate enough to play both Gaelic and soccer. When I was a young boy, I was just enjoying what I love which was to play sport,” he admitted.
“I came to the stage in my life where I had to make a decision and it seems like it was the right one for me.

“I think playing Gaelic stood me in good stead for going into soccer full-time.
“I’ve a close relationship with the Tyrone lads and it’s great to see them doing well.

“I follow them closely and we have great support for each other’s respective careers.
“Things have worked out brilliant. I wouldn’t change it for the world,” said McGinn.

McGinn has developed himself into a quick and direct footballer with his versatility a particular strong feature of his game. He has gone on to represent Scottish giants Celtic, English side Brentford before a move to current club Aberdeen where he has established himself as a first team regular.

As for a summer break, McGinn must wait for a rest following Northern Ireland’s exploits in France with the Aberdeen player due back in Scotland ahead of the Scottish club’s European campaign.

McGinn has declared himself fit and available for tomorrow’s First Qualifying Round first leg tie with Luxembourg outfit CS Fola Esch at Pittodrie.
“I spoke with the manager, Derek McInnes and he wants me back to play the first European game tomorrow night (Thursday) and I’ll probably get a rest after it.

“I’m looking forward to the new season with Aberdeen. We were better last season than the year before but we ultimately fell a bit short in the end.
“All in all, we have got to be happy with our progress over the last few years, especially with potential European qualification for the upcoming season very possible.

“It’s been good for me personally and for the club as well. We are sort of back on the map and we want to go that one step further in Europe this year.”

As for the future, McGinn is not only focused on his club career, but is also looking ahead to the World Cup qualifying campaign for Russia 2018 which begins in just a few months time and is hoping for further success with the Northern Ireland history-makers.

“The World Cup campaign is just around the corner, starting the first week of September,” he said.
“We know it’s not going to be easy with only one team in each group certain to qualify.

“We have got the likes of World Champions Germany, Czech Republic and Norway in our group but we know that on our day, especially at home that we can beat anyone so we can look forward to the qualifying campaign with great confidence after the impact we made in France,” he added.

The Aberdeen and Northern Ireland winger is arguably at the peak of his career at the age of 28 and the next chapter of his football career could herald great things for one of the North’s most exciting players.