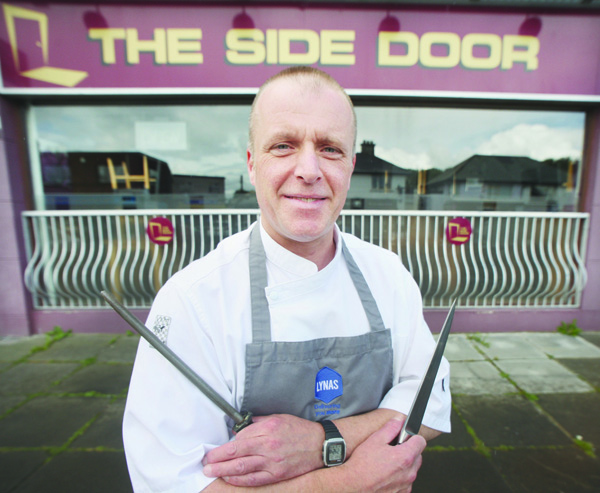 VALUE AND QUALITY: Brendan Rafferty, Owner, Manager and Head Chef at The Side Door Restaurant in Glengormley

BORN and bred in North Belfast, Brendan Rafferty is a well-known figure to many in the food and catering industry. With over thirty years experience in the field, he has been the head chef, first manager and then owner of the popular The Side Door restaurant, located at Febro Buildings on the Antrim Road in Glengormley for 13 years.
Brendan grew up on the Cliftonville Road until he was 16 years old when his parents moved to the Antrim Road. His first part-time job came in the old Lansdowne Court as it was known back in the day.
Ever since a young age, Brendan was interested in the food and catering industry and decided to pursue a career in the field when he left school at 16. After three years at the College of Business in Brunswick Street in Belfast, he went on to complete a B-Tech qualification and an advanced catering course.
Subsequent employment followed in the shape of a full-time role in the Lansdowne before spells in Belfast Castle, the Crawfordsburn Inn and Chimney Corner.
But it is with his current venture The Side Door that he has made his name, establishing the 32-seater restaurant ever since taking over six years ago as the new owner.
Brendan explained: “The Side Door is basically a family-style restaurant with something on the menu for everyone. The menu is very mainstream.
“The previous owner’s menu was something close to fine dining but people were still ordering pizzas. I thought it wasn’t right so I changed the menu about a bit.
“I had my own ideas and kept it mainstream to attract anybody and everybody.
“The pressure was there to get bums on seats and it has worked ever since so I have no intention of changing it.”
Brendan also acts as Head Chef at The Side Door and thanks to his wealth of experience, he has put his own style and spin on food.
“I would cook things like lasagne, carbonara, scampi and burgers,” he added.
“Everything is home-made. I am experienced enough to know what way things are cooked best and what sells well.
“I used to be a sauce chef and I suppose sauces and soups are still my forte. It is still probably my favourite aspect of being in the kitchen.
“I was brought up in the catering industry on a French theme which is something I still like doing, especially with some of the specials in the restaurant in some shape or form.”
As for how things have changed in the industry, Brendan points to a number of various things he has noticed over the years.
“The food industry has changed massively over the years,” he explained.
“Themes and customers needs and wants are like night and day now since when I started off over 30 years ago.
“Food takes waves now, much like politics. whether Italian or Mexican themed.
“There are more vegans and vegetarians than ever before but allergies is such a big thing these days. Celiac is definitely the main one and you just have to be so careful.
“I probably wouldn’t have taken as much of an interest in allergies but when I found out my daughter had a nut allergy, it changed everything. It scared me.”
Looking ahead to the future, Brendan reflected on what he has achieved so far at The Side Door.
“Glengormley is a perfect setting. People thought I was mad taking The Side Door on with the amount of competition but my idea was if you want to buy a washing machine and there is more than one shop available in the same area to buy it, you will still compare it, just like restaurants.
“I think we stand out because we are not pretentious. Many restaurants are, in my opinion. We are not – what you see is what you get: fresh food bought from a number of different suppliers who I have built up a relationship with over the years. I buy the best produce that I can get but at affordable prices for customers.
“I believe also in good service and to my knowledge, we are still the only bring-your-own restaurant in Glengormley.
“As for the future, I am not getting any younger. I thought around two years ago about looking for a bigger premises. What I have to turn away from a Thursday to a Sunday now is scary some weeks, but I thought here was working. I decided to stay because things are good and long may it continue.
“Customers keep coming back so I must be doing something right.”

Brendan Rafferty is Owner, Manager and Head Chef at The Side Door restaurant in Glengormley.