Full-on drama on banks of the Half-Moon 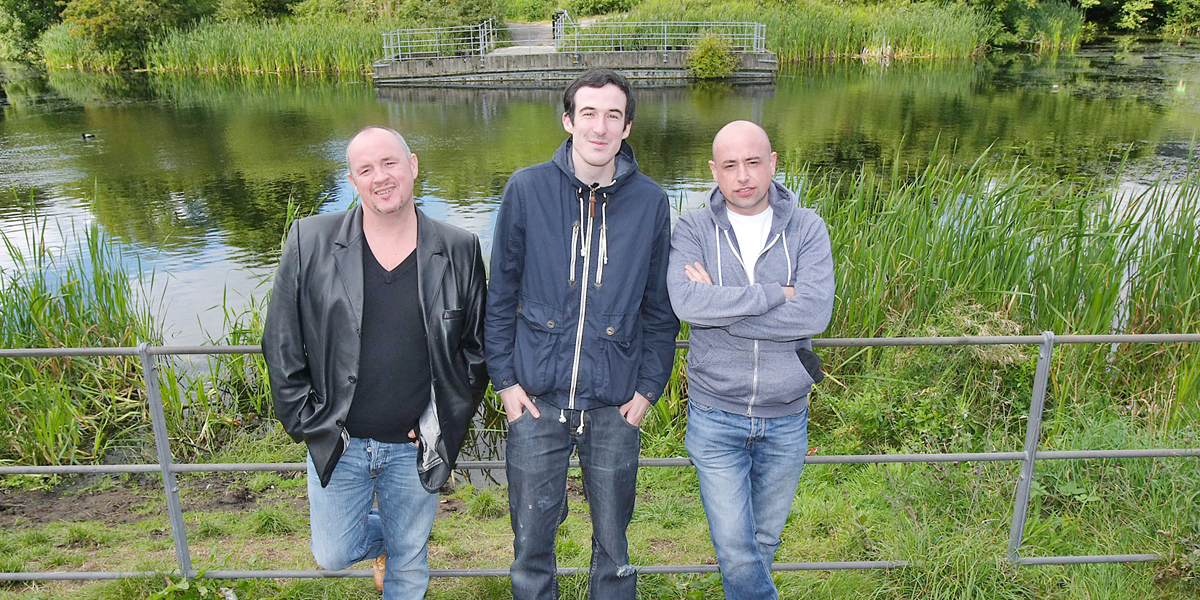 THE latest offering from the prolific pen of Lenadoon playwright Pearse Elliott, ‘Man in the Moon’, is set to have its world premiere “in its spiritual home” of West Belfast next week.

Debuting at the Roddy’s for two nights next Friday and Saturday before transferring to the Grand Opera House, the one-man show starring local actor Ciarán Nolan, a long time Elliott collaborator, tells the story of Seán Dornan, a man who has been sacked from his dead-end job. And to rub salt into the wound, his girlfriend has left him, taking their child with her and the bank has just repossessed his home. The audience finds Sean alone at the Half-Moon Lake in the heart of the Lenadoon estate, pondering the direction his life has taken.

Speaking on the banks of ‘the Halfie’, Pearse said that Ciarán is “one of the best young actors working in Ireland today”.

“I have worked with Ciarán many times since Man About Dog and Pulling Moves,” said Pearse. “I know his strengths and know that he has a great ability to take the words that I write and bring them to life. I started to work around a concept of what this play could be about around a year and a half ago. I thought, what is relevant today? I wanted to create something contemporary and edgy and combine that with telling good funny stories along the way.”

“If you are writing for the screen or film you have to really tell the story through image, but with theatre you’ve got the stage to convey all the stories to make it theatrically interesting for your audience.

“I’ve always been interested in myths and how they can take on their own persona. The Half-Moon Lake has always had a mystery about it, it was always like a wee sanctuary when we were growing up. I thought it was a great setting for this play.”

Not only is Pearse familiar with the Half-Moon Lake, he’s sadly all too familiar too with the issue of suicide, which has convulsed areas like Lenadoon and which is one of the play’s key issues.

“It is a contemporary piece, there are a lot of people out there today who are in trouble, in crisis, going through difficulties. I didn’t want to be preachy about it, I also wanted to add in humour. There is no doubt that Ciarán is going to do a fantastic job.”

“The character of Seán is not unlike a lot of people in Ireland who are finding life tough,” said Ciarán. “Here is a guy having financial problems, relationship worries and finding it hard to get work. You could throw a stone these days and it would bounce off someone with these types of issues. Seán seeks out a place to soul-search and that for him is the Half-Moon Lake.

“It’s brilliant to be working with Pearse and Tony Devlin, our director from Brassneck Theatre. Some of the best stuff I’ve ever done was Pearse’s work. People still stop me in the street and ask about Pulling Moves. It’s funny because I can’t write the work, I can act it. Pearse can’t act, but he can write it. I asked him to write this show and here we are.”

“The Half-Moon Lake is a ten-minute dander from the Roddy’s,” said Pearse, “so it’s fitting we have the premiere in the Roddy’s. I feel it’s a very special piece with an actor at the top of his game. Audiences are in for something very special.”

Man in the Moon will have its world premiere at the Roddy’s on Friday, September 20 and Saturday, September 21. Tickets are £10 and are available from the bar. The play will transfer to the Grand Opera House from Monday September 23 and will run until October 5.