Fury backs Frampton to bounce back 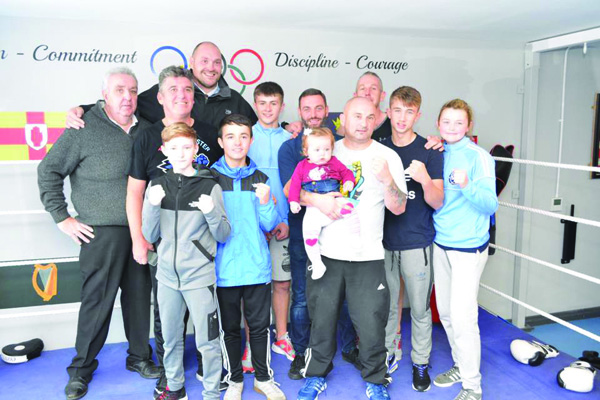 TYSON Fury believes Carl Frampton has plenty of options upon his return and feels ‘The Jackal’ is more than capable of getting his hands on another world title.
Frampton as been out of action since losing his WBA featherweight title in a rematch against Leo Santa Cruz in Las Vegas back in January with his proposed return bout against Andres Gutierrez in July shelved following a freak accident that saw the Mexican slip in the shower.
Since then, Frampton has confirmed his split with Cyclone Promotions including manager, Barry McGuigan and trainer, Shane McGuigan while he has confirmed that he will now be trained by Manchester’s Jamie Moore.
With a decision on his new promotional/management team expected in the coming weeks, Frampton is hoping to get back in the ring before the end of the year and Fury, who was speaking at St Paul’s ABC in Andersonstown on Monday, believes that should Frampton be mentally tuned in, he can put his nightmare year to date behind him.
“It’s all in a man’s head,” said the former heavyweight champion who has been out of action for 22 months.
“After defeats, you have to do what you have to do to get back to your best.
“You have to do a bit of soul searching to find yourself again.
“It’s not like he was knocked out in 10 seconds. He lost on points on a split decision.
“I think he can get back to his best, whatever his best may be and win a world title again.”
Frampton of course wants that third, rubber match with Santa Cruz, but it looks likely that will not happen until next year at the earliest with the Mexican defending his title against Chris Avalos before taking on the winner of Abner Mares and ironically, Gutierrez early next year.
The North Belfast man will have to identify new targets for the foreseeable and Fury feels there are still plenty of options for the 30 year-old should he want to get back to the top.
“He already beat the man (Santa Cruz) once and there are plenty of other champions out there to beat at different weights,” he opined.
“Lee Selby has got the IBF belt. That would be a good fight between them wouldn’t it?
“There is another good fight in Josh Warrington as well. Warrington is a good ticket seller and so is Frampton, so there are a lot of big fights out there for him and plenty of money to be had.”
Fury has not boxed since claiming the lineal heavyweight title against Wladimir Klitschko in November 2015 as he saw a rematch with ‘Dr Steelhammer’ cancelled twice with the former Holy Family amateur forced to pull out twice, the second time after being declared ‘medically unfit to fight’.
While he was back in the gym on Monday, the 29 year-old said that does not mean he is on the comeback trail, but didn’t rule it out either.
“It depends if I want to do it one day, then I’ll do it,” he said.
“I don’t think you’ve seen the best of me.”