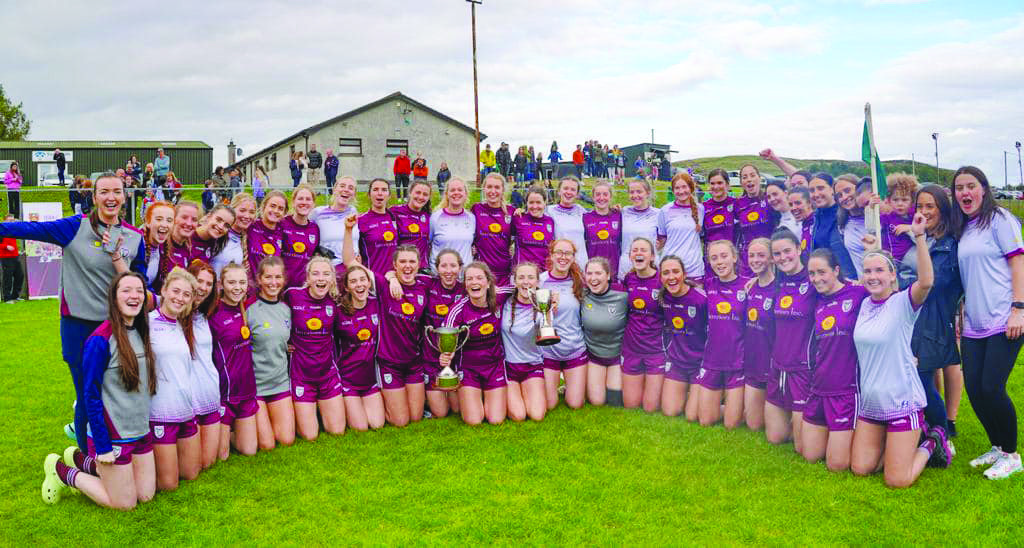 IT is a huge weekend for ladies football in Bredagh as the South Belfast club have two teams in Ulster Championship action.

At Cherryvale on Sunday (2pm), the seniors will face Antrim champions Moneyglass in the Ulster Senior quarter-final, whilst the Harps’ second team will be on the road to Derrygonnelly where they meet the home club in the Intermediate quarter-final, also at 2pm.

The growth of ladies football is apparent in the South Belfast club and it was underlined with both teams winning their respective Down finals last month, with Nicky McCafferty’s seniors making it five-in-a-row thanks to an impressive 4-13 to 1-4 victory over Castlewellan last month.

There will be an added buzz in the club this week that is aided by the fact they get to host the game at their Cherryvale base and that green light is another massive step forward according to the Bredagh manager.

“We are looking forward to it,” McCafferty confirmed.

“It’s a big game on Sunday against Moneyglass and the big difference this year is that we are able to host the game at Cherryvale - a first for an Ulster Championship ladies’ game.

“We know we will have our work cut-out against Moneyglass as they have won two Antrim titles in-a-r-ow and they are buoyed by the girls who were part of Antrim’s All-Ireland (Junior) winning team, so it’s set for a good game of Championship football on Sunday.”

Moneyglass have overtaken St Paul’s as the leading force in Antrim the St Ergnat’s club is laden with talent including county players: Anna McCann, Niamh McIntosh, sisters Maria and Sarah O’Neill, Cathy Carey, Bronagh Devlin, Orlaith Prenter, Emily McCoy, Aine Devlin and Danielle Connolly - all of whom were part of the Antrim panel this year.

There is also an added piece of intrigue, however, as that county contingent will be in direct competition on Sunday as Aisling McFarland is a member of the Bredagh side, with former Antrim skipper Clare Timoney still a formal point of the South Belfast side’s attack.

Timoney contributed 1-6 of their county final total, bit had plenty of support with Eva Hicks, Eilish Ward and Viv McCormack finding the net, whilst they have a very solid defence lead by county final player-of-the-match, Nuala Carvill, plus Orna Kelly an Hannah Murray.

The South Belfast club lost out in the Ulster final to Donaghymoyne after a replay last year and will have their sights firmly on going all the way in 2022. but McCafferty insists they can’t take their eyes off the ball this weekend as he is anticipating a tough test against Moneyglass.

“Moneyglass is a team on the rise,” he stressed.

“They have built momentum and momentum is a great thing in sport.

“I suppose one of the pleasing things about Bredagh and Moneyglass, plus all the teams that are coming through, is that there is a great deal of work going on at underage level.

“There’s a good mix of youth and experience this year, so it has got itself up for a typical Ulster Championship encounter.

“The fact it’s being played in Belfast is fantastic, especially when you consider the work being laid out by Gaelfast, so this is an opportunity to show that Gaelic games are alive and well in South Belfast.”

The second team will make that trip to Fermanagh on Sunday and it is quite a journey in such a short space of time for that group as last year they won the Down Junior title and built on that by taking the Intermediate crown at the first time of asking with a 4-6 to 2-6 win over Burren in last month’s final.

That gives an indication of the strength of ladies football in the club and that there is also a conveyor belt of talent to feed into the first team.

A victory for both teams on Sunday would be a further shot in the arm and whilst McCafferty is hopeful that can be the case, he is taking nothing for granted.

In terms of the senior game, Bredagh will ender as favourites as they are now seasoned at this level, but when it comes to the provincial series, there are no easy games and a below-par performance could spell the end of the road.

“The Intermediate team goes to Derrygonnelly on Sunday as well so there is no doubt about it - it’s great for the club to field two teams,” the senior boss acknowledged.

“For the Intermediate team to win the Junior last year in Down and then go onto win the Intermediate is fantastic. They will go down to Derrygonnelly on Sunday with everything to play for, but in any championship game you take nothing for granted.

“Championship is a different kettle of fish, but both teams have prepared well and are looking forward to their respective challenge and fingers crosses we could have both teams still in their Championship on Sunday if everything goes their way.”