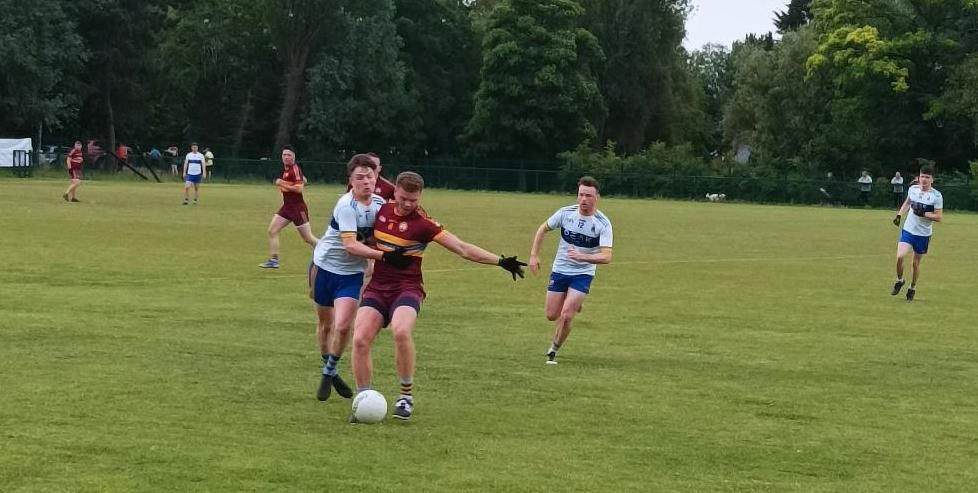 Homefit Antrim Football League Division One
St Brigid's 0-11 Gort na Móna 0-12
A STIRRING second-half performance saw Gort na Móna give themselves a real fighting chance of moving off the bottom of Division One as they claimed victory over St Brigid's as Musgrave Park on Wednesday.

The Turf Lodge club are just one point off Tír na nÓg, although have now played a game more due to the Randalstown club receiving the bye on Wednesday.

They got there with a fine second-half display of patience, disciplined defending and some fine finishing as they carved out openings to build a winning tally, with excellent defending and fielding limiting the hosts any real openings as their work rate and desire to bank a vital win shone through on the night.

Gort na Móna were giving noting away easily and building with patience out for the back, but took a little while to carve out a decent opening that did come on five minutes as they moved the ball through the hands quickly and Patrick McCaffrey finished well.

Just after, home goalkeeper Reuben Carleton was called into action to deny Aidan McDonagh's rasping five with St Brigid's breaking straight upfield and a long ball in was superbly taken down by Joe Finnegan who popped to Marcus Lynch to score.

Bradley then converted a free and added another soon after from play with Patrick Finnegan riding a challenge to set up Joe for a score that put the hosts four clear after 16 minutes and seemingly well in the driving seat.

However, Gort na Móna absorbed this period of pressure with McCaffrey hitting back with a point immediately and then Padraig McHugh kicked a free to bring the visitors right back into play.

Feargal Meenagh responded with one for the South Belfast men, but there was a sense that Gort na Móna were growing into the ascendancy as they finished the half well.

Eamonn Scannell was sharp to get to a 50-50 ball first and sling over a fine score and then in stoppage time, McHugh did well to keep the play alive when a shot seemed to be tailing wide and the ball ended back with Darren Boyd who thumped over from range to cut the St Brigid's lead to 0-6 to 0-5 at the half.

The visitors were level soon after the break as goalkeeper Thomas McCaffrey converted a long free and while Marcus Lynch found Patrick Finnegan inside to huge the hosts back into the lead, there was a sense the tide was turning.

Gort na Móna had put a lot into this game already by working tirelessly to close the door on the hosts, but the inspiration they needed in attack came with two beauties in the 37th minute.

The first came when Desy McClean guided over a score with the outside of his boot from out on the right and then when they kick-out broke of the Gorts, Boyd produced a similar finish from deeper on the opposite side to give the Turf Lodge outfit the lead for the first time.

The confidence began to flow as while they were punished when Jack Dowling intercepted a stray pass to find Bradley who passed out to Conor McAleer to level, the Gorts seemed to have an extra spring in their step.

They continued to work brilliantly and were rewarded when a tuner in their defence led to a breakaway with Boyd thumping an inch-perfect long ball down to McClean who was in acres of space to gather and pop to McHugh to put them back in front.

McClean then wasn't far away from finding the net on 47 minutes as he read a stray kick-out and with Carleton out of his area, aimed for goal but was just off target from 30 metres out on the right.

He would convert a mark following another unreal ball in from Boyd, while Eamonn Scannell finished a great move to put three between them.

St Brigid's stayed in touch with Bradley curling over a free, but on 55 minutes, Scannell lashed over from close range on the left to give Gort na Móna a little extra breathing space.

It was now a case of St Brigid's piling forward with Gort na Móna flooding their defence and they managed to close down the avenues, but Marcus Lynch did have a half-chance when getting space on the left, yet his shot went out across the face of goal and wide.

A high ball inside fell to Joe Finnegan whose shot was blocked and spun up in the air with a touch seeing the ball drop almost into the net, but was scrambled off the line by a Gort na Móna hand out for a 45 that was quickly taken to Bradley who kicked his fifth of the evening two minutes into stoppage time, although his night would end badly when shown a red card after the final whistle.

There were still a few minutes left with Gort na Móna holding on and putting enough challenges in to prevent a game-winning goal as they claimed a huge two points that makes it back-to-back victories for the first time this season and gives them real hope of beating the drop. 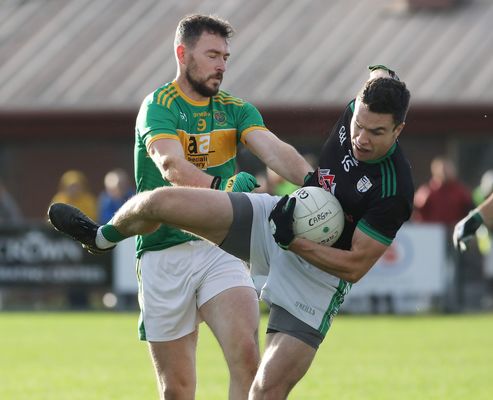