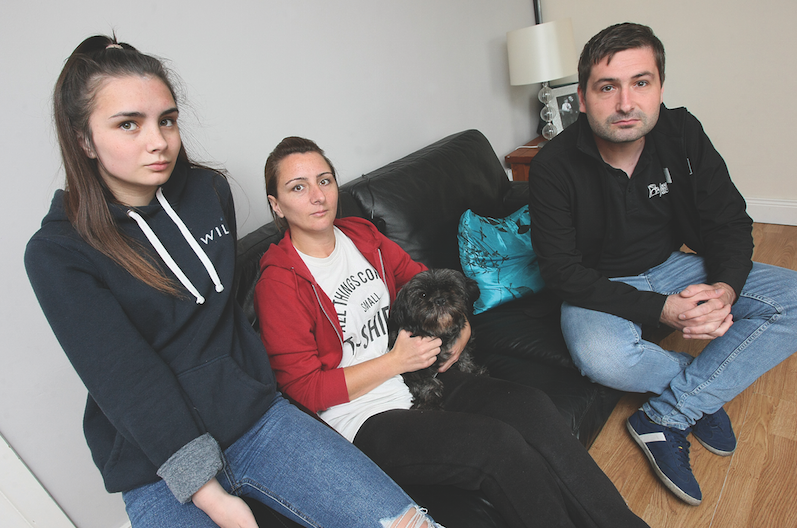 ABANDONED: Padraig O Meiscill of the Homes Now campaign with Eleanor Mulligan and her daughter Caitlin

A DOCUMENTARY capturing the reality of those in ‘housing stress’, effectively a state of homelessness, was presented in Conway Mill last night as part of Feile 30.
‘Waiting on a Childhood’ is an important piece of work that gives a voice to the children living through this crisis. Families in housing stress are typically forced into emergency accommodation such as single-parent hostels, share cramped accommodation with relatives or ‘sofa-surf’ on a nightly basis. They and their families, including local mother of two Eleanor Mulligan, are featured in the film.
“Over 20,000 children are on the waiting list here, with 13,000 of them deemed to be in housing stress – those figures are an absolute disgrace,” says Eleanor “The documentary looks at kids, many of whom are in the same situation as my own kids, who are on the housing list and nothing is being done to help change that.
Sharing her first hand experience, touched on in the documentary, Eleanor revealed: “My teenage daughter has the experience first hand having been on the housing list since the day and hour she was born. We’ve never had a home to call our own, even this house has been someone else’s as are the possessions in it.
“We have moved from the city to the country, we have stayed in B&Bs and hostels where I lay awake fearing for my children’s safety, I’ve slept on sofas whilst my kids had to live in their prams. Social Services get involved and threaten to take your children away if you are without ‘stable accommodation’ and yet people are still left in that hopeless situation.
“I tried to private rent over 10 years ago but six months in I couldn’t afford the rent and we were evicted. People say ‘You should have gotten a cheaper place’ or ask why I did it but I was homeless. I had no option but to take it because it was a roof over my family’s head.”
Eleanor said her main hope is for the point system to be readdressed.
“The system hasn’t been changed since the day and hour it was put in place, it’s outdated and isn’t fit for purpose,” she claimed. “It was supposed to help with housing and equality and it’s safe to say it hasn’t worked. Housing points include toilets outside and other outdated situations that need to be re examined and re written.
“They also need to stop building developments in areas housing is not needed, and stop giving hotels and businesses first dibs on land and funding. We do not need more hotels, we do not need more shops what we need are homes for families.
“We have found land in the past, we have presented a booklet of possibilities and done the ground work but those in charge don’t want to know. The likes of the Colin Transport Hub is a prime example of money and land that could have been put to good use tackling the housing crisis in Belfast.
“They just don’t care.”
Eleanor’s 14-year-old daughter Caitlin also appeared in the documentary as she felt it was important to highlight the impact the situation has on young children.
“This shouldn’t be happening, it’s not good at all,” she said. “Those responsible need to start fixing the situation for all of us, people out there are homeless or constantly being moved around and it’s not right.
“Every child should have somewhere they can call home.
“I am working on a social media page for children on the housing list to come together because its not just adults who are affected and if w don’t try for change now then my generation will continue to suffer.”
Pádraig Ó Meiscill, a member of the Homes Now campaign, worked with children and families on the housing waiting list to make the documentary. He says there are hundreds of families who have spent, collectively, tens of decades on the housing waiting list with no end in sight while commercial developments such as hotels and multi-storey car parks are given precedence.
“The Housing Executive, whose job it is to ensure there are adequate numbers of housing units built, Belfast City Council, who can zone land for housing, and the Department for Communities, who can vest land for housing, are complicit in this crisis,” he said. “They continue to prioritise vanity projects, and I’m not saying they shouldn’t be engaging in economic redevelopment of the city, but by 2030 Belfast City Council is wanting something like 60,000-odd people living in the inner city zone, but land that could be used to met that goal is constantly being awarded to businesses and the Gasworks are a prime example of that.
“Our basic ask is that they build the houses needed to met the demand. Anyone working in the sector doesn’t think is an unreasonable demand. This is a housing crisis, and it needs to be treated as such as salvaged by building houses people need.”