'Hannah just wants to get to her school' 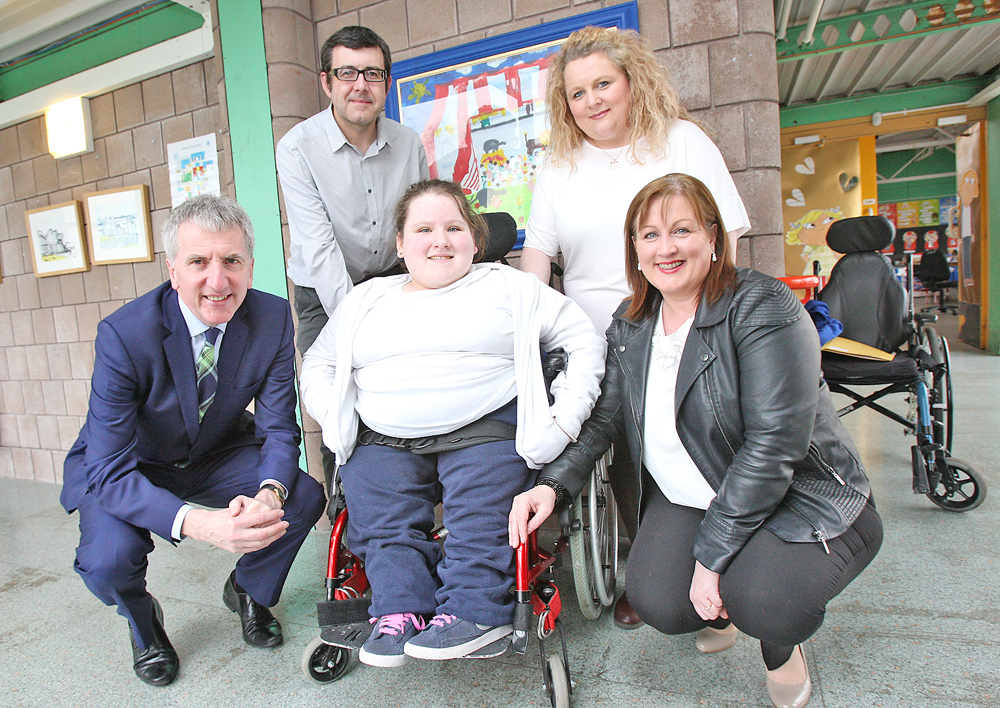 Hannah Black at Fleming Fulton with Marian Bradley (right), Fleming Fulton Board of Governors, Máirtín Ó Muilleoir MLA, who is urging education authorities to get their act together, and her parents Stephen and Fionnuala

THE PARENTS of a disabled South Belfast schoolgirl whose attendance record has plummeted thanks to frequently cancelled buses have appealed to education bosses to put on a proper service.

12-year-old Hannah Black, who has spina bifida and attends Fleming Fulton in the Upper Malone area, says she “just wants to go to school”.

Hannah and her family are becoming increasingly frustrated at the unreliability of the bus service, which has seen Hannah miss numerous days and left her feeling frustrated and embarrassed. When Hannah first started Fleming Fulton the school had a contract with a private taxi firm. Her family say there was never a problem and the taxi was totally reliable.  Due to cutbacks, however, that service was withdrawn and replaced by an unreliable bus service.

Hannah’s dad Stephen said: “The last three years Hannah has been going to school on the bus. Last year the problems started in that we were getting phone calls in the morning to say that the bus had broken down, meaning the tail lift at the back wasn’t working and therefore the children in wheelchairs couldn’t get on and off the bus.

“It was a day here and a day there and we didn’t actually realise the extent of the problem until her attendance was addressed by the school at her school review. It turns out she’s been missing a substantial amount of time from school. We had to explain to them that the problem wasn’t with us, it was largely due to the transport not being reliable.

“We really rely on the bus to get Hannah as we have three children and are both working, so it really puts a spanner in the works if we have to keep Hannah off. This is Hannah’s tenth year at Fleming. It’s her second home, she knows everyone here and all her needs are catered for, be they educational or therapeutic. It’s a fantastic school.”

On a regular day Hannah leaves for school every day at 7.30am and gets home at 3pm. Hannah is then with a child-minder until her parents get home after 6pm. But too often days are anything but regular, thanks to malfunctioning vehicles.

Hannah’s mum Fionnuala said: “The first day back after Christmas we got a phone call to say the bus wouldn’t start. We thought nothing of it we managed for a few days then it dragged on into another week. We were then told that the bus needed a new part that would have to be ordered from Italy. The bus ended up being off the road for three weeks. Stephen and I took half-days off work and my employer let me come out of work, pick Hannah up and bring her back to work with me. She stayed in my office until I was finished. Although it was really good of them to do that, it’s far from ideal as Hannah was exhausted. There are four wheelchair users on Hannah’s bus who were affected by this. We feel it’s unfair, all the buses should have the appropriate wheelchair adaptions. Hannah’s statement of educational needs states that she will be provided with transport to and from her place of education. Every child has a right to an education and we feel that our daughter is being discriminated against. We feel there has been a lack of interest, it’s only when we kick up a stink that something is done.  We have been in touch with Jeffrey Donaldson who has been very helpful to us, as has Máirtín Ó Muilleoir. The bus broke down again this week, it came as usual on Wednesday morning and as we were putting Hannah on the bus the tail lift jammed. On one occasion last year we got a phone call to say that the lift had broken again and they were at another parent’s house. We had to lift Hannah off the bus then carry her wheelchair off and put her into her chair. It was embarrassing for her, it’s undignified.”

South Belfast MLA Máirtín Ó Muilleoir said: “The parents at Fleming Fulton are inspirational in their commitment to the education and development of their children and I enjoyed the opportunity to talk over a range of key issues with parents and with staff on my visit. While transport to school is essential for all children, it’s absolutely vital for children at Fleming Fulton. I am happy, therefore, to take on board the issues raised and will be making representations to the Education Authority and to the Minister about bus services to Fleming Fulton.”

An Education Authority spokesperson said: “The Education Authority is responsible for providing home to school transport for around 90,000 children.  A small number of children with special educational needs require the use of very specialist vehicles. Regrettably, mechanical failures can sometimes occur. Where this happens, the Authority makes every effort to provide alternative arrangements. This is not always possible, particularly where specialist vehicles and equipment are required. In these circumstances, it is the responsibility of parents to ensure appropriate arrange-ments are in place to transport pupils to and from school. Where appropriate, the Authority will assist with expenses.”