Harbinson unsure if or when league will resume 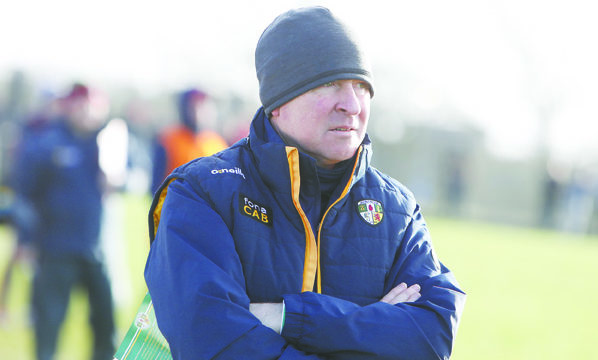 THIS weekend would have been pencilled into Lenny Harbinson’s diary from the beginning of the year as he plotted Antrim’s escape from Division Four of the Allianz Football League.

This was to be the weekend of the finals, staged as consecutive double-headers at Croke Park on Saturday and Sunday.

Antrim were well-placed to reach the Division Four decider and wins over Wicklow (away) and Waterford (home) would have secured them one of the coveted promotion berths.

Instead of hosting the league’s in-form teams this weekend, the GAA’s headquarters, along with other county grounds, are being used as a drive-through testing centres as the worldwide fight against the Covid-19 pandemic continues. In such worrying and uncertain times, football has, rightly, taken a backseat.

Yet, when football does resume, GAA bosses will have to resolve a calendar which was already creaking under the stress of moving a number of competitions to the early part of the season.

Harbinson says the Allianz Football League could be declared “null and void” amid the growing uncertainty surrounding fixtures, but hopes some compromise is found when life gets back to some form of normality.

“The longer this Covid-19 pandemic continues, the tighter the season will become,” stated Harbinson.

“The authorities in Croke Park will be looking at a number of scenarios. The first one is to run off the last couple of league games quickly as soon as the competition can resume. The window will obviously be tight once you start moving into June and July – how does that hit the Championship?

“Another option is to declare the league null and void, which would be very unfortunate for this season.

“Or the third option is to say where everybody is currently is the final promotion and relegation standings. I’d imagine the counties who would, potentially, be relegated would then appeal that. For me, those are the only three scenarios I can see. These are exceptional circumstances and obviously there is a kick-on with the Sam Maguire and the Tier 2 Championship.”

While no firm decision has been taken by the GAA, it has been widely speculated that the newly-dubbed Tailtean Cup, the Tier 2 Championship in football, will not be used in this year’s Championship with the All-Ireland Qualifier also scrapped in favour of a knockout Championship, possibly with the provincial finalists being given a second chance.

However, as Harbinson rightly cautioned, a lot of scenarios depend on how quickly the spread of the Covid-19 virus can be brought under control.

“Central Council might also decide that, under exceptional circumstances and for this season only to revert the Championship back to a straight knock-out,” added Harbinson.

“That’s all predicated on this virus being under control and being in remission across Europe.

“People are still talking about Italy not having reached their peak yet and we are meant to be three or four weeks behind. We are coming into April now so who knows when we will get back. It is all guesswork at the moment.

“Who knows what is going to happen, but if you are looking at what is going on in Italy and Spain and France, you’d have to think we are close to a total lockdown.”

It is an indication of how swiftly life as we know it can change when, on the first Sunday of March, Antrim turned in their finest performance of the season to defeat Limerick in Portglenone.

That stunning 2-21 to 1-12 win over the Treatymen moved the Saffrons into second in the Division Four standing, one point behind Billy Lee’s men and, as such, left their fate in their own hands.

On Sunday, March 15, Antrim were due to travel to Aughrim to take on Wicklow, but the GAA took the decision that week to cancel all GAA activity until the end of March and it seems certain that games across all codes will be on hold for at least another month.

For now Harbinson, like all managers, must try and keep his players ticking over and Antrim trainer Fionntan Devlin has devised individual training programmes for the squad.

While initially frustrated by the postponement of fixtures, the Antrim boss says with hindsight the decision to call of game was the correct decision and urged everyone to do what they can to help stop the spread of the virus.

“It was frustrating and it has broken our momentum, but it is the same for everybody,” said Harbinson.

“If you look at Division Four, everyone bar the bottom two has a chance of promotion so it is all to play for. The other two teams could determine who goes up because they aren’t going to lie down – they are playing for pride in the jersey. The was the potential for another few twists and turns.

"There’s no doubt that there was initially a sense of frustration. Whenever the announcement came about the crowds of 500 at events, I was thinking maybe the last two rounds of the football league could be played behind closed doors to get them done and dusted.

“I was certainly expecting the last round to go ahead behind closed doors. There was initially a sense of disappointment.

“Then, you take a step back to look at the enormity of what is happening across mainland Europe and the anticipation that Ireland could be impacted if we don’t take precautions early and severely enough, you realise it is for the greater good. Your annoyance moves to acceptance and now you just hope that in a couple of months things could resume.”

He added: “We are looking at the players and we got them individual training programmes so then can work away at their own house. We will take that week by week as the situation evolves. We have to follow the advice given and do what we can to limit the impact of this virus.”