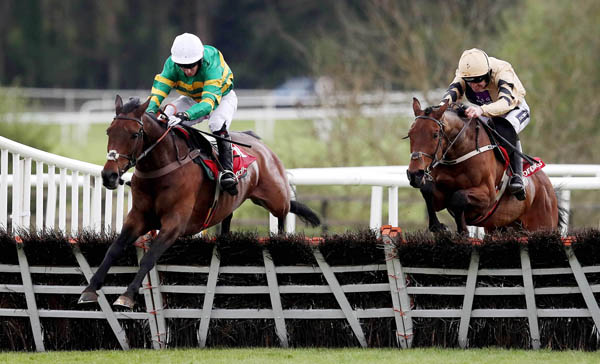 HARRYS GAME: Our each-way bet in the Stayers Hurdle is 2016 winner Uknowhatimeanharry who is around 9/1 with Sean Graham Bookmakers

Cheltenham 2018 – DAY THREE
Onwards and upwards as we enter Day Three of the festival and hopefully you are in a stable position after the opening two days. One thing’s for sure - it doesn’t get any easier for us punters.
Stayers’ HURDLE 3.30pm Thursday
The big race on Thursday is the Stayers’ Hurdle (3.30) and it’s yet another open looking contest.
Irish raider Supasundae (5/1), Sam Spinner (7/2) and Yanworth (5/1) are battling it out for favouritism at the head of the Sean Graham betting markets.
Supasundae (5/1) comes into the race off the back of two brilliant runs at Leopardstown. He ran Apple’s Jade very close over Christmas and then lowered the colours of Faugheen in the Irish Champion Hurdle and looks the one the rest will need to pass come Thursday.
Uknowwhatimeanharry (9/1) from the Harry Fry stable finished third last year and although he has not been at it in recent races, he barely runs a bad race at Cheltenham and looks cracking each-way value. That double-digit price could change come the race.
JLT Novices' Chase  1.30 Thursday
The third day gets underway with the excellent JLT Novices Chase and Willie Mullins sends Invitation Only (7/2) for this after swerving the RSA Chase. He looks a solid bet in the race after an excellent close-up third behind Monalee in the Flogas Novice Chase at Leopardstown and he should be in the shake-up on Thursday.
The big danger, and there will be a few, could come from the improving Terrefort (5/1) from the Nicky Henderson yard who chases three out of three UK wins and could be anything.
Pertemps Final Handicap Hurdle 2.10 Thursday
On to the Pertemps Final and it’s a wide-open lottery of a race which we nailed the winner of last year when 11/1 shot, Presenting Percy did the business for us. Can we follow up?
We have put two fat each-way selections up for the race and first up is the Alan King-trained Who Dares Wins (14/1) who has been set out for the race and looks good place value, while shock Leopardstown winner, Mine Now (20/1) might cause another shock at big odds - another each-way value pick.
Ryanair Chase 2.40 Thursday
Another high-class Ryanair Chase field goes to post on Thursday and last year’s brilliant Willie Mullins-trained, Un De Sceaux (5/4) will again take some beating in the race.
He has already hacked round to two wins this season and the heavy going will not bother him. He is as low as 5/4 with Sean Grahams for the race.
Cloudy Dream (11/1) travels well through races, but does not find much of the bridle and he looks an each-way player and the forecast bet for us.
Brown Advisory Plate 4.10 Thursday
On to the Brown Advisory Plate and this has unquestionably been one the hardest races at the festival for punters to work out in recent seasons and boy, this race will be a nightmare for punters yet again.
Make sure you punt each-way in the race and we have come up with two horses we think might make the frame.
Tully East (10/1) did the job for us last year in the Brothers Novices' Handicap Chase and will be a big player in this race and a great each-way prospect with bookmakers paying the first four.
Also coming into our place plans is another Irish raider, Last Goodbye (12/1) who hacked up in the tough Grade A Chanelle Pharma Handicap Chase at Leopardstown and that run alone gives him massive place claims in this one.
Mares' Novices' Hurdle 4.50
On to the Grade 2 Mares Hurdle and another possible festival banker with the Willie Mullins-trained, Laurina (4/6) who has been touted at most Cheltenham preview nights as a ‘cert’ and goes into this Mares race of the back of a Grade 3 romp at Fairyhouse and will take all the beating.
Off the each-way value we like the Cap Soleil (10/1) who has two out of three over hurdles this season and looked a classy act when winning on his debut at Newbury and a re-production of that run would get her at least a place here.
Kim Muir Handicap Chase 5.30 Thursday
Still with us? Right, another tough one to end Day Three and we have the Fulke Walwyn Kim Muir Challenge Cup Handicap Chase, a race for amateur riders and another lottery for us punters.
We again have put two each-way horses up for this with Sugar Baron (10/1) and the hat-trick chasing Band of Blood (11/1) holding our each-way money hopes in this lottery of a race which usually throws up a shock.

Remember £5 Matched Bets for Cheltenham in this week's Andersonstown News and North Belfast News - Both papers on sale now.