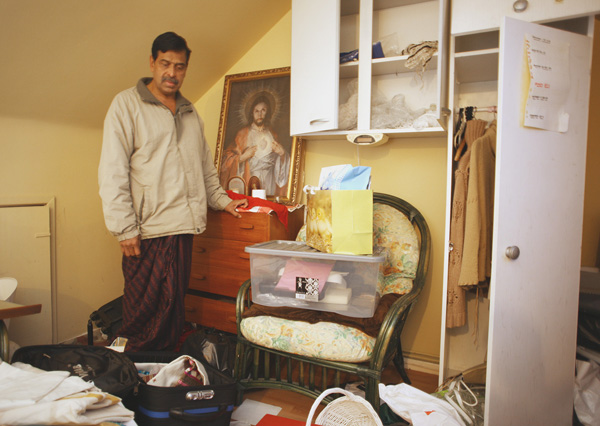 AN Elmfield man has been left devastated after cash and treasured jewellery from his daughter’s wedding was stolen.

Mathew Nampudakam returned from work in the early hours of Saturday morning to find his Glengormley home had been ransacked. It is believed the burglary occurred between the hours of 6pm and midnight.

“I came home at around 2am to find the house had been totally ransacked,” he told the North Belfast News. “They came through a back window. I saw a light upstairs was on but I thought I had just forgot to switch it off when I left the house.

“Everything was pulled down from the cabinet in the living room and the bedrooms upstairs were totally ransacked. My house has been left in a mess.

“My daughter was married three years ago but moved to Birmingham with her husband last June.

“Her marriage jewellery is traditionally Indian – gold necklaces, bangles and earrings. It’s very sentimental and it is precious to our family,” he added.

The 66-year-old has appealed for information from the public as he attempts to retrieve the irreplaceable jewellery.

“I am staying alone and I’ve been left a bit shaken by this. I’m also not in good health. It’s a complete intrusion of your privacy to have someone ransack your home when you are not there.

“I would appeal to anyone who has seen the jewellery. I’m not concerned about the £200 cash but the jewellery is of great sentimental value to myself and my family.”

Local Sinn Fein Councillor Michael Goodman has called on residents in the area to be aware.

“I would ask today that people keep their homes locked and secured at all times, including during the daytime,” he said.

“There is a worrying trend of a slight increase of burglaries across Glengormley. Anyone with information should contact the PSNI.”

“If people see any suspicious activity of any kind, they should report it immediately to the PSNI or crimestoppers.

“Where possible, people should be watchful for their neighbours. Reporting suspicious activity can lead to increased police supervision of an area and arrest of suspects.

“Police resources that are allocated are based on the number of reports in that area,” he added.

Detectives from the Reactive Crime office in Antrim said: “We in Antrim and Newtownabbey strive to keep people safe but this can only be done by working in partnership with the local community.

“We would be keen to identify anyone who could assist us with this investigation. This family have been subjected to a gross intrusion in their private lives. Therefore we are appealing for any witnesses to get in contact by ringing the non-emergency contact number, 101.

Alternatively information about the theft of the cash and jewellery can also be passed anonymously via the independent charity Crimestoppers by ringing 0800 555 111.”