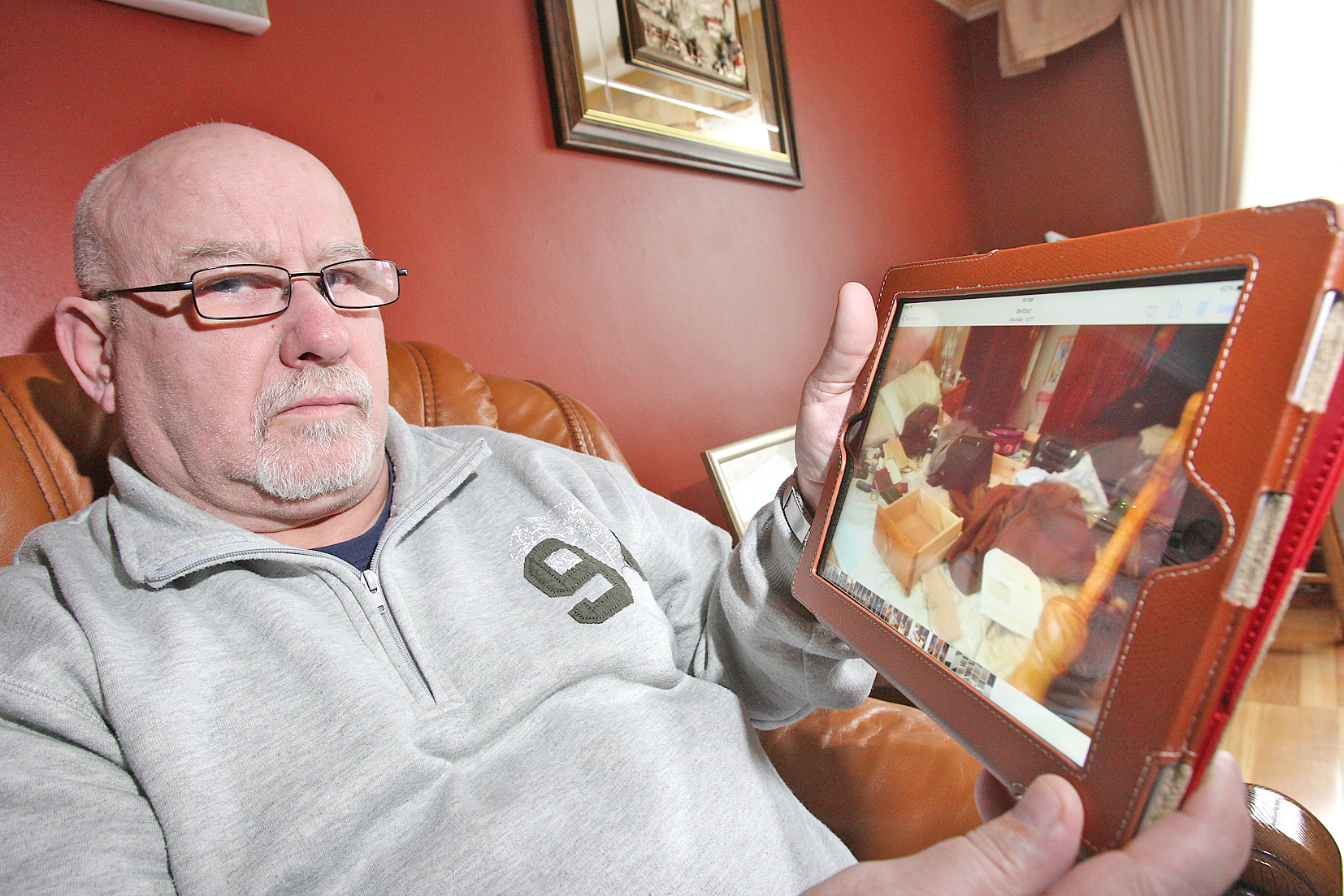 Devastated: Tony Gibson with an image of the ransacked bedroom on his iPad

A BEECHMOUNT pensioner has been left devastated after being robbed of his lifesavings by callous thieves who also stole his late wife’s jewellery.

Sixty-five-year-old Tony Gibson returned home from visiting his son on Friday night and made the discovery. He said he realised something was wrong when he noticed the light was out in the living room.

“I have my lights set to a timer so I just knew something was wrong,” he said. “I went over to check and as soon as I turned the switch on I knew someone had been in my house.”

Tony has lived in the house on his own since his beloved wife Marie passed away twelve years ago. He describes what happened next: “I ran into my bedroom and it was just total devastation, the room was pulled apart, every drawer was opened and things were thrown all over the place.
“They took over £7,000 on me, my life savings, every penny I had. I had the money hidden inside a coat in my room.

“Then I realized that they’d taken my wife’s jewellery, things that can never be replaced, things that you could never put a price on, her engagement ring, wedding ring, eternity ring, bracelets, necklaces, everything. I’m completely devastated.

“How can I put a price on something I bought for my wife in 1969? Marie’s jewellery is priceless to me. They knew what they were looking for, once they got the money they knew they hit the jackpot.”

Tony’s daughter-in-law Christine who has been by his side throughout his ordeal said: “Tony is of the generation that doesn’t put their money in the bank, he thought it would be safe in his own home.

“After Marie died Tony started wearing her rings around his neck on a chain. A few years ago he took them off and put them in the jewellry box for safe-keeping. Losing the money was bad enough but they’ve taken his memories too.”

She added: “Tony kept a Bible in his bedroom, it has been passed down through his family for years, they tore it apart, it’s disgusting, just mindless destruction.”

Tony says his neighbour was alerted by the sound of her dog ‘going nuts’ at around 8.30pm on Friday and when she went out to see what was going on she saw three young fellas running down the street and into the entry. He says his life has been completely turned upside down.

It is believed the thieves gained entry through the back bedroom window of the property.

This is the latest in a series of robberies on the elderly and vulnerable in the Falls area in recent months.

“When the police arrived that night one of the officers told me there had been other break-in attempts the same night in Beechmount Parade and the Springfield Road area,” Tony said.
“I go up to my son’s house in Twinbrook every night and Christine makes me my dinner, I’m a real creature of habit. After dinner I sit with them a while then I go and visit my other son, I think they’ve definitely known my routine.

“It’s all you hear, these days. If it hasn’t happened to you then you know of someone it has happened to.

“I managed to fall asleep about 3am on Tuesday morning and I jumped out of my sleep at 4am because I thought I heard someone climbing over my gate. I was running about the front in the lashing rain with a golf club thinking they were coming back again.”

Christine added: “Thank God he wasn’t here when they came in because this could have ended so differently, I dread to think what could have happened.

“Tony hasn’t slept since this happened to him, he suffers from Diabetes and has severe anxiety, we are worried sick about him.”

Christine says that for the last fortnight or so Tony had been telling her that he thought he could hear someone trying his door handle during the night.

She added: “People need to realise that it’s not just physical harm they inflict on people, it’s mental – and that lasts a lot longer.”

Local MLA Fra McCann said he has known Tony for a long time.

“I feel awful that this has happened to him, his home has been violated and his privacy invaded. These people need to be caught, they will have sold on his late wife’s property.

Whoever buys jewellery from these types of people will have paid low prices to buy a lifetime worth of memories, they have no place in our society,” he said.

A spokesperson for the PSNI said anyone who noticed any suspicious activity in the area or who has any information should contact police on the non-emergency number 101.

“Or, if someone would prefer to provide information without giving their details they can contact the independent charity Crimestoppers and speak to them anonymously on 0800 555 111.”