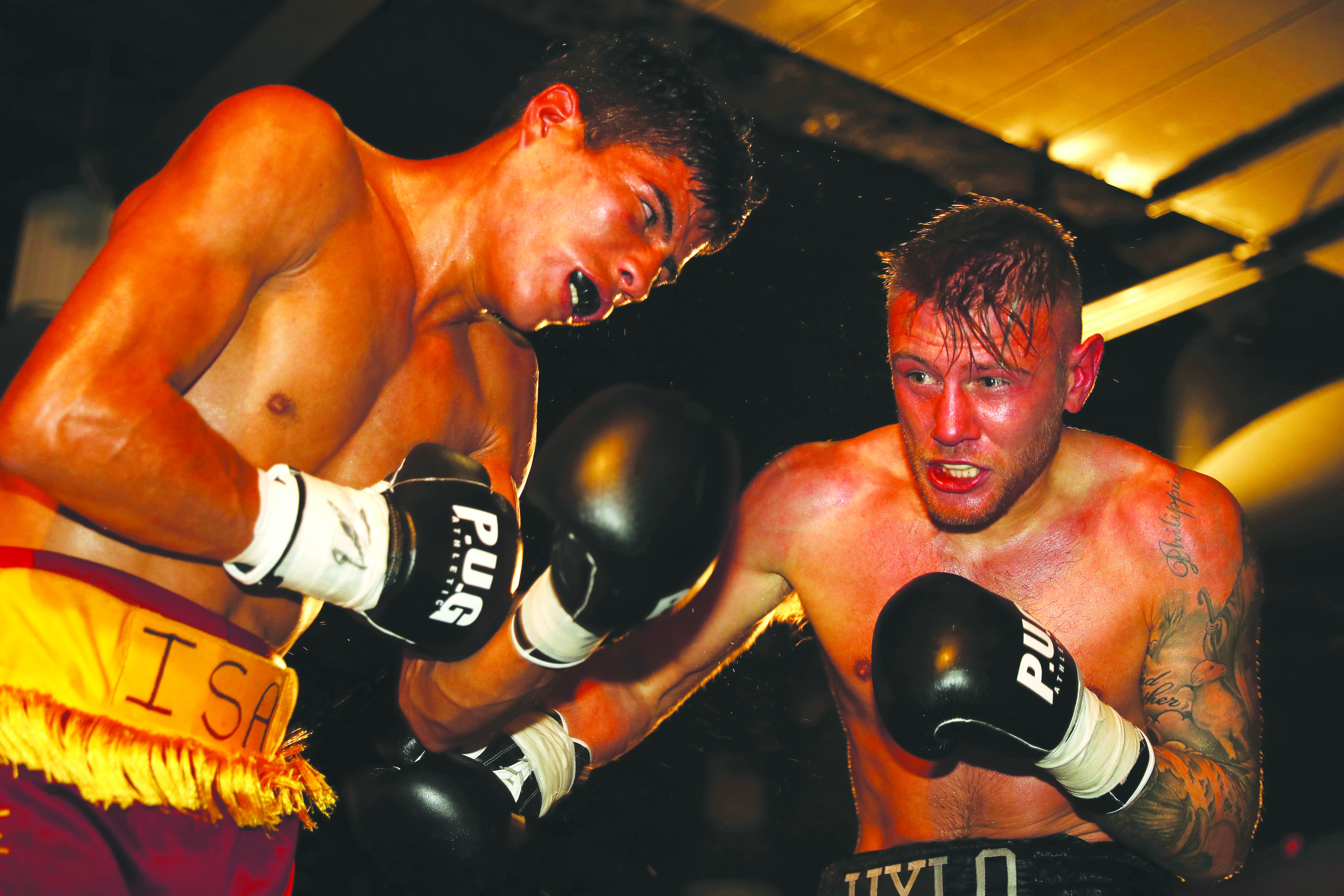 IT had the potential to be a real banana skin, but Paul Hyland got the job done at the Europa Hotel on Saturday night when scoring a points victory over Nelson Altamirano to improve to 13-0.

Hyland had originally been scheduled to take on Felix Lora over eight rounds at lightweight, but visa issues forced a late change in opponent with Altamirano stepping in.

The Nicaraguan certainly offered a different challenge to Lora with a much greater height and weight advantage over Hyland who could have been forgiven for letting the disappointment over the withdrawal of Lora affect his performance. But despite the adversity, Hyland put in a fairly solid display that once again highlighted his willingness to go to war.

“It was difficult. I trained for the eight rounds against Lora, but he (Altamirano) was a stone heavier so it was whole different tactics,” he said after his 80-71 points win.

“He was far taller than Lora so I had to box him differently. You don’t think five kilos is much, but when someone is in the ring with you five kilos heavier it just drains you.

“I was training myself to get my own weight down, but then I was told of the switch of opponent so I was working on my weight and the switch in tactics. It was a tough fight because he was always in my face, so I felt it definitely.”

The West Belfast lightweight has garnered a reputation for going to war and Saturday was no different as from the opening bell, Hyland and Altamirano tore into each other with Hyland knocking his opponent’s gumshield out with a right hand.

The visitor was clearly trying to frustrate Hyland by tying him up at every opportunity and in the second, he was warned three times for holding or low blows as the action took place at close quarters with Hyland landing an eye-catching uppercut.

Altamirano was on the deck in the third, caught with a crisp right counter although it was more a flash knockdown as the Nicaraguan was quickly up on his feet. It was obvious the size difference was making a difference as Hyland was landing with some excellent shots, but Altamirano kept marching forward seemingly undaunted by the straight rights and uppercuts he was forced to take although he did get a breather in the fifth when Hyland landed a low blow.

While it was clear that the stoppage was beyond him on this occasion, Hyland continued to trade with Altamirano and was certainly doing the better work, even shipping the occasional right to prove the strength of his chin and when the final bell tolled, there was no doubting who was going to get the decision.

“I just had to focus to get the win,” said Hyland.

“I can’t perform my best all the time. I was trying to move but he kept coming. He kept catching me when I was moving.”

The late change in opponent certainly upset his preparation with a completely different challenge put in front of him at such a late stage, but to come through relatively comfortably is testament to his preparation and mental strength.

“I still had to fight,” he stressed.

“I was still focussed on that and had the training done, but just the fact that it’s a different opponent along with the weight makes it tough. I hurt my arm, I’d hurt it before but thought was fine, but I think it was about the fourth I felt it so I was trying to move around on one arm with a heavier guy. It was tough enough.

“He could bang, especially being heavier. He was just walking into the punches which was to my advantage and the one that put him down was a straight right hand. I think what won me the fight was my movement and that straight right hand, because when I was trading with him he was taking everything.”

Hyland’s victory edges him a little bit closer to his immediate target, a shot at the British title currently held by Scott Cardle who was a winner in Glasgow on Friday.

“I definitely want to fight him because I want that British title,” he insisted.

“I would love to have that belt around my waist, so hopefully Mark (Dunlop, manager) can get that for me next year or something.”

Whoever is next for Hyland, he is hopeful it can be against an opponent who campaigns at his own weight and should that be the case, he is confident he will deliver a much better display.

“At the end of the day, I got the win and did what I had to do,” he continued.

“It was probably a bit scrappy, not my best performance but I will just move on.

“The next one I can concentrate on maybe getting that knockout against someone my own weight. It will be a better performance.”

Hyland was the headline attraction on a fantastic fight card at the Europa with the vast majority of the seven bouts well matched and providing gripping action for the packed hall.

The night began with a 40-36 points win for Dublin’s Jay Byrne over a regular visitor to Belfast, Liam Griffiths while another Dubliner, Ian Tims ground out a points win against Remigijus Ziausys (60-55).

The only stoppage of the night came when Tyrone McCullagh took four rounds to overcome Edwin Tellez, while Coalisland’s Feargal McCrory scored a 40-37 points win against Ivailo Boyanov.