‘Hylo’ ready to shine on the big stage 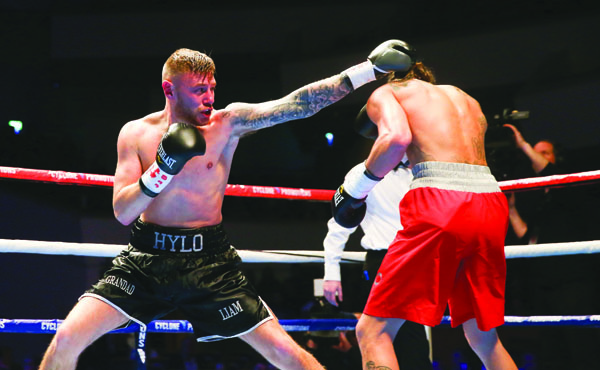 HAVING built his record on the small hall stage, Paul Hyland Jnr is determined to announce himself in front of the big SSE Arena crowd when he tangles with Adam Dingsdale for the IBF European lightweight title on Saturday night.

‘Hylo’ had his first taste of live TV coverage on St Patrick’s night when he out-pointed Peter Cope on Matchroom’s ‘NxtGen’ show at the York Hall in London and his performance was such, promoter Eddie Hearn was keen to have him box on this Saturday’s Haskins v Burnett card.

The 26 year-old Lagmore man has a perfect 15-fight record and he says he is thrilled to get his big chance on such a stage.

“Mark (Dunlop, manger) and Eddie said they were definitely going to get me a title for this, so I’m really delighted I’m fighting for such a good title.

“Winning this will mean I can get better fights and Eddie was saying he would work more with me from here on. It’s just about getting this win and everything can come from it.”

That St Patrick’s Day win drew admiring glances from Hearn and many others who had not been familiar to Hyland’s all-action style.

The experience of boxing live on Sky Sports will serve him well on Saturday and he feels he can relax a little more this week.

“That was an introduction to it all which was great,” he agreed.

“I have done all the hard work and hard training, so I’m buzzing to perform in front of the cameras and for all of the people who bought tickets.

“I’m really excited to go out and show what I can do.”

Standing in front of him will be former Southern Area champion, Dingsdale.

The 29 year-old native of St Helen’s comes to Belfast with a record of 16-3-1, his three losses in title fights.

He was out-pointed for the WBO European by Dubliner, Stephen Ormond, while a WBA Continental fight against Derry Matthews ended in a points loss, as did his English title fight against Kevin Hooper.

‘Dingsy’ has stopped just four of his 16 victims which suggests he isn’t the biggest puncher and while Hyland only knew the identity of his opponent last week, he says he is ready and determined to take the title.

“I only found out I was fighting him last week, but I’ve trained hard so now I just have to adapt to fight his style,” he explained.

“He is a quick boxer, he moves a good bit and has a good record and hasn’t been stopped, so I’m expecting a good, hard fight.

“I have trained hard. My fitness is good so I will be in his face. He is going to have a hard night because I’m taking this opportunity to take this title.

“If he thinks he’s coming here to take that belt out of Belfast, he’s another thing coming. I can fight or box.

“I can adapt to do whatever I have to do to win and that’s what I’ll do on Saturday night.”

A win here will move Hyland into title contention with the IBF and on the ladder as far as the world title picture goes. For that, he is eternally greatful to his team for giving him the opportunity his hard work deserves.

“I know this is my chance to show a big audience what I can do,” he stressed.

“This will get me into the top 15 in the world rankings, so that’s brilliant news. I’m really pleased with that.”