I Believe in Superheroes 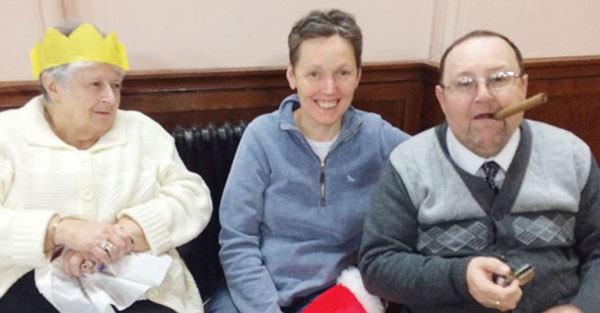 Mona McConnell, left, who coordinated her annual Operation Santa from her sick bed in 2015 with Eileen Mullan, chair of Age NI, and Billy

I can’t remember when I stopped believing in superheroes. Perhaps when I was 13 or 14 when I stopped bringing my Superman and Batman comics to mass and instead started watching the girls going up for Communion.
But I never really entirely gave up hope that there were out there somewhere superheroes who would race in to rescue the drowning child, cradle the falling airplane or save our embattled cities.

So how happy was I when finally I got to meet a genuine superhero who ran a multinational, life-saving operation — without even having to leave her lounger at Fortwilliam Gardens?
And what superpowers Mona McConnell had. She was her very own holy trinity: Santa Claus, St Jude and Superwoman all wrapped up in one glorious package.

With her superpowers, Mona was able to see into the future and envision a Christmas morning in Belfast where every homeless person would have the dignity and joy of waking up to a festive parcel crammed with goodies, courtesy of Mona’s hardworking elves at Ekenhead Memorial Halls. And having seen the future, she made that dream a reality, rounding off Christmas day with a party for the lonely.

Mona had superhuman X-ray eyes. They enabled her to see those who are often invisible to the rest of us as we go about our busy lives: the destitute and the derelict, the homeless and the heartbroken, the refugee and the asylum-seeker. And by embracing the lowliest of them, she obliged the rich and the powerful, the politicians and the preachers, to respond with the compassion and kindness she showed.

But though Mona’s superpowers were many, like Superman himself she did have one Kryptonite weakness: she couldn’t understand the word “no”. And if in her presence you used the complete sentence “that definitely can’t be done, Mona” her entire superpower system crashed and she had to go back to watching the TV until she heard the words “yes, Mona, consider it done, Mona”.
So for sure Belfast lost a superhero when Mona McConnell passed.
We lost a woman of great faith, the type of Christian who could have hung out at the Stella Maris homeless shelter with Pope Francis or Mother Teresa: she preached the Gospel but she never used words.

And if you think housing the homeless and feeding the hungry is beyond us, let me leave you with Mona’s own handwritten parable, taken from a diary she carried.
“It’s impossible,” said Pride.
“It’s risky,” said Experience.
“It’s pointless,” said Reason.
“Give it a try,” whispered the Heart.