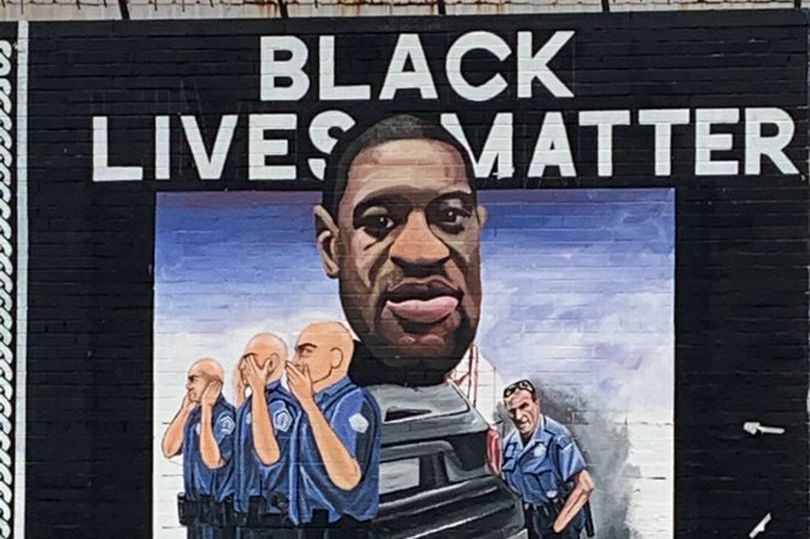 SEE NO EVIL: A mural memorialising George Floyd has been unveiled on the Falls Road.

As Belfast prepares for rallies in protest at the killing of African American George Floyd by Minneapolis police officers, West Belfast activists have unveiled a mural in his honour.

The mural on the International Wall on the Falls was commissioned by Féile an Phobail and local tourism agency Fáilte Feirste Thiar.

Fáilte Director Harry Connolly described the International Wall as "a beacon of hope and platform of solidarity" and said the new mural of George Floyd expressed the local community's hope for "an end to racism in the US and around the world".

West Belfast MP Paul Maskey hailed the local community for its “long-standing history of standing up for the rights of the oppressed" and of internationalism.

“Whether that was local men joining the International Brigades during the Spanish Civil War to fight against fascism, our close relationship with the anti-apartheid movement in South Africa or on the streets of Belfast today as our community rallies to support refugees," he said.

“I am delighted that Fáilte Feirste Thiar and Féile An Phobail have joined up with local artists to paint a mural expressing our community’s continued solidarity with the Black Lives Matter movement and those campaigning for rights, economic inclusion and an end to repression in the United States."

There are now three murals paying tribute to three heroes of the African Americans civil rights movement: escaped slave Frederick Douglass who visited the city in 1845, Congressman John Lewis who was on the march on the bridge at Selma in 1965 and now police brutality victim George Floyd.

Today, we also publish for the first time in Ireland a new work from Irish American poet Ethna McKiernan who grew up in the Twin Cities of Minneapolis and St Paul. She is the author of three books of poems, the most recent of which is Sky Thick With Fireflies (Salmon Poetry, Ireland). Widely anthologized in collections diverse as The Notre Dame Anthology of Irish American Poetry, 33 Minnesota Poets and Beloved on this Earth, she has twice been awarded a Minnesota State Arts Board Fellowship. She is employed by a Minneapolis non-profit, working with the long term homeless population.

The helicopters whirred and droned

until they lodged inside my ribs,

until I was back in Vietnam and Jeff

was dying high above the gauzy clouds

in one of them.

Sirens with their high whines

screamed down the streets every five minutes

and we smelled the smoke curdling down

from the torched buildings.  This is America

from America when Emmett Till was lynched in 1955.

When grief and rage mix, they

something larger and more potent

than themselves.  Strip rage

and underneath  a feral cat waits

to pounce. Strip grief and there is only more

grief that goes on forever.

Today I mourn  the death

of George Floyd, whose neck

was pinned for nine minutes

beneath a white cop's knee

until the only thing that could be heard

was “I can't breathe.” I mourn

the officers who didn't try to stop

him, I mourn everyone

who didn't get the news in time

to intervene or yell “stop!'

For the systems of racism and thuggery

that killed him, for the brutal fires

and looting that succeeded him,

for my dear neighborhood ruined,

for the agent provocateurs whom I know

contributed, for the small businesses that just

I toss my own Molotov cocktail

of grief to the sky.