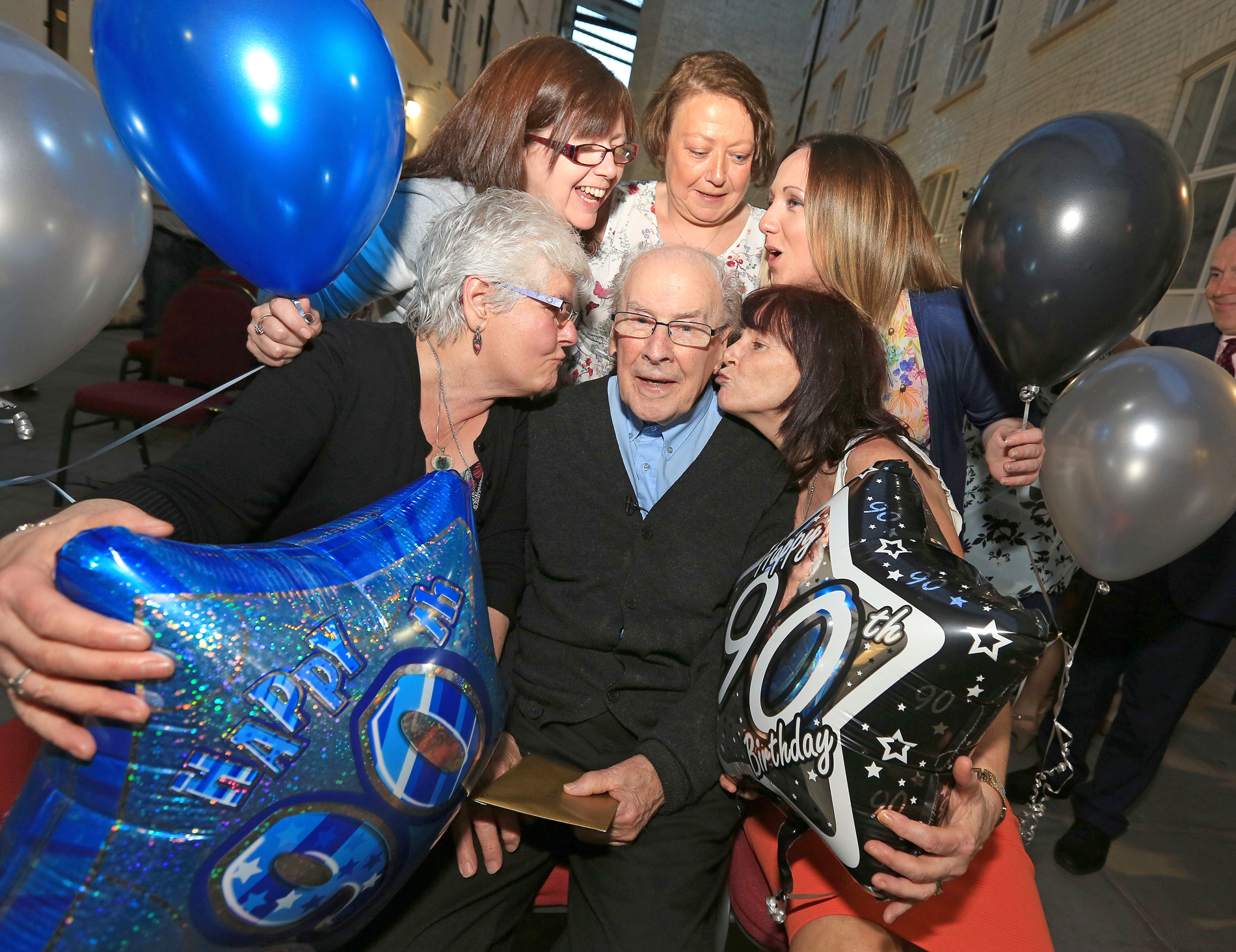 He may be turning ninety, but the impish mischief and kindness which epitomise people's priest Fr Des Wilson were to the fore last night as he blew out the candles on his birthday cake at a community celebration in Conway Mill.

Nodding to his older brother Gerard, sitting in the front row with the extended Wilson family, Fr Des noted that the pair of them were now in a race "to achieve the Big Hundred!”

"But don't put any money on the result of that race because I have a feeling he'll reach it first," he joked.

Several hundred people from organisations which had worked with Fr Des over six decades of activism in community education, theatre, economic development, journalism and the struggle for civil rights gathered in Conway Mill, a testament to his 30-year battle to turn the venue into a hub of enterprise and endeavour despite a British government embargo on aid to the Mill during much of the eighties and nineties.

But central to the night was the community of Springhill and Ballymurphy who had sustained the Springhill community houses — where Mass was said regularly after Fr Des was banned from officiating in church property — alongside Des and the late Noelle Ryan.

A TG4 documentary on the proudly rebellious cleric (scheduled for screening at 10.20pm on Thursday, July 2) was screened for the birthday party audience before the Féile Women's Choir serenaded the birthday boy with a series of inspirational songs including 'Something Inside So Strong'.

Thanking Fr Des for a lifetime of service, Springhill Community House stalwart Pat McGlade told him: "You shared with us your vision of a new society where people's rights and dignity are respected… a vision of a new Ireland where people previously excluded will have their place in the sun. You taught us the gospel of small beginnings, that when we sow with integrity we need fear no-one for nothing can destroy that seed, it will flourish a hundredfold."

In an emotional address at the end of the evening, Fr Des, stopping occasionally to wipe away a tear, said he had enjoyed his life and was grateful for it. Speaking in Irish, he said: "Bhí saol fada sona agamsa go dtí seo, bhí go leor trioblóide againn ach bhí muid uilig ag seasamh le chéile sa troid mar chairde. Bhain muid sult as ár saol le chéile, bhí sé agus tá sé go hiontach." ("I had a long happy life. We had many troubles but we stood together as friends in the fight. We enjoyed our life together, it was, and is, marvellous.")

Fr Des added: "Being ninety is quite a good idea. I recommend it."

He said he was particularly pleased that the birthday party was being held in Conway Mill — "a sign of this community's courage and generosity."

As he entered his tenth decade, Fr Des saw out the night as only he could, with a poem:

The Young Man on his Ninetieth Birthday

On his ninetieth birthday

Why do I live so long, when after all,

My father died at fifty eight

While I at ninety am still inhaling heartily.

On the other hand,

His father, my Granda, lived to be a hundred and two — or four

We don't argue about it —

After a lifetime believing he wasn't well.

Every market day he'd visit the doctor in the town

Until the doctor — to confirm his best suspicions you might say — Said, "Mr Wilson, you are right, you are suffering

From a severe surfeit."

He never needed to see the doctor again

Happily spending his life busy and between times

With his friends all trying to work out what a severe surfeit was.

Happily it was nothing at all.

He passed away in great dignity

Still wearing the glasses the chemist gave him

Which helped him to see

Happily and busily for the rest of his life

Although they had no magnification in them at all.

Maybe that's the secret of a long life.

Happy mystification without the unnecessary magnification.

Maybe the truth is my two grandas and two grandmas

Had so many things really right with them

They had to invent

Things wrong with them to show they were normal.

So on his ninetieth birthday

The young man said, "Why should I live so long?"

To a hundred and two

Or a hundred and four — we'll not argue about it.

Or even live to a hundred and twenty

But only if all of us could do it together.