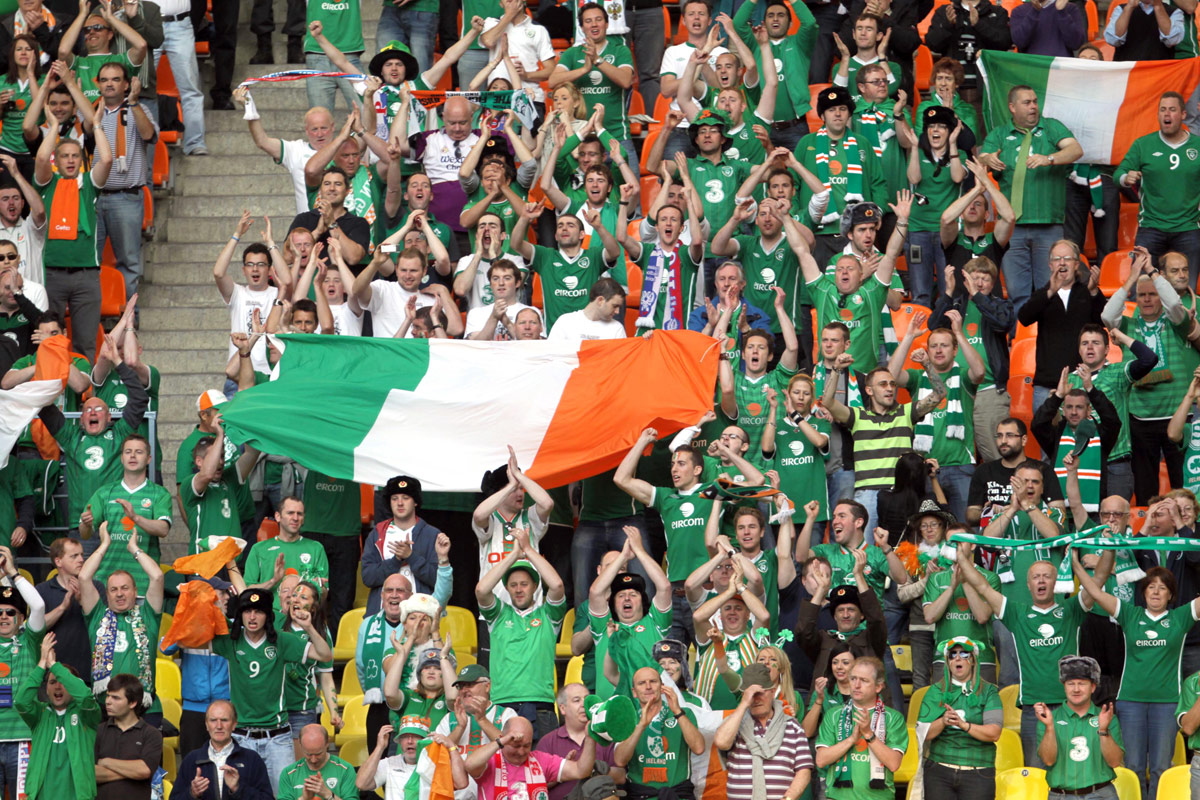 The Aviva Stadium has sold out for an Ireland soccer match for the first time ever, as excitement builds ahead of this week’s Euro 2012 qualification play-offs.Ireland travel to Estonia on Friday for the first leg, before returning to Dublin for what should be an electric atmosphere at the new Lansdowne Road on Tuesday night.

A campaign initiated by the ‘You Boys in Green’ supporters group hopes to make the Aviva a sea of patriotic green for the second leg.

The ‘Go Green on November 15’ campaign has been endorsed by the FAI, manager Giovanni Trapattoni and sponsors 3, with the hope that the entire country will wear green in support of the team on match day.

3 have even put 50,000 green cards on the seats at the Aviva ahead of the qualifier, while face painters will add further colour to the occasion.

“Our fans have stuck with us throughout this campaign, so we hope that they will stand shoulder to shoulder with us as the team line out on November 15,” said manager Trapattoni.

“The atmosphere in Aviva Stadium will be great, but we would like everyone to go green on November 15 to show their support for the team.”

If Ireland overcome Estonia they will reach a major tournament for the first time since the 2002 World Cup in Japan and South Korea.

And, if they beat their Balkan opponents, they will have Nigel Worthington and his Northern Ireland also-rans to thank for allowing Estonia to somehow finish second in their qualification group.

Rewind five months to June and Estonian football was in crisis.

They had just lost to the minnows from the Faroe Islands 2-0. It was a convincing victory for the North Atlantic islanders, under the guidance of former Ireland manager Brian Kerr - their first Euro qualifying win since 1995.

Perhaps the signs for that shock defeat were there. Estonia’s Euro 2012 qualifying campaign had began in August 2010 with a Houdini-style victory over the Faroes at home.

They trailed 1-0 to the part timers after 90 minutes but two late goals saved Estonia from the most embarrassing result imaginable.

Things didn’t improve in the next match with a home defeat to Italy, but Estonia’s most impressive result of the campaign followed in Belgrade a few days later when they beat Serbia 3-1.

However, reports suggest that was a smash and grab job as Serbia had dominated the match.

Estonia scored two quick-fire goals, which the keeper should have dealt with, and the decisive third goal was the result of a horrendous mix up between Serbia’s defence and goalkeeper.

If Estonia thought that magnificent win last Autumn would kick start their campaign they were wrong.

It would be almost a year before their next win, a 2-1 defeat of Slovenia in September and in between they would lose at home to the Slovenians, away to the Faroe Islands and suffer a heavy away defeat to Italy.

Estonia were virtually out of qualification contention until two consecutive wins over Northern Ireland, the first an emphatic 4-1 victory that saw Northern Ireland fans erupt in fury at manager Worthington.

Estonia had to beat Northern Ireland in the away tie at Windsor Park last month to keep distant qualification hopes alive.

On a frustrating night for the hosts in the Village, Northern Ireland went 1-0 up but a second half collapse allowed Estonia back in and two goals from Vassiljev, including one from the penalty spot, gave them hope of landing a play-off berth.

For that to become a reality they needed Slovenia, who were out of qualification contention, to beat fancied Serbia in the final round of matches. Estonia, who had already played all their matches, watched on as Dare Vrsic put Slovenia ahead.

Serbia came back and threw everything at Slovenia, but missed a gilt-edged opportunity to secure a play-off spot when Manchester United’s

Slovenia held on for the victory and Estonia could celebrate an unlikely second-placed finish.

Scarring the current Estonia squad list for a familiar name, I came up short.

There’s usually one or two stand-out performers from even the most obscure European country, a household name or at least someone who has made an impression in one of Europe’s top leagues.

This is not the case with Estonia. Tarmo Kink, a centre forward, is the only player based in England or Scotland. The Middlesbrough man has been limited to one substitute appearance this season.

Konstantin Vassiljev has top scored for his country this campaign, scoring five goals including both goals against Northern Ireland at Windsor Park. The rangy midfielder plays for Amkar Perm in the Russian Premier League.

Experienced centre half and captain Raio Piiroja has recently moved to Vitesse Arnhem in the Dutch Eredivisie after several seasons in Norway. The rest of the squad are scattered across Europe, playing club football in the likes of Cyprus, Belarus, Azerbaijan and the Ukraine.

It’s difficult not to get excited about Ireland’s prospects, given the Estonian’s underwhelming qualifying campaign.

Of course, Ireland have not been setting the world alight with their performances either.

A 2-0 friendly win over Italy in the summer has been the highlight of an underwhelming few months for Trapattoni’s men.

Kevin Doyle finds himself suspended for the first leg in Talinn after being sent off in the tense, final qualifier against Armenia.

Shane Long, the dangerous West Bromich Albion striker, has been laid low after a horror challenge from Alan Hutton three weeks ago.

Leon Best, enjoying some fine form with Newcastle, was called up to the Ireland squad last week, but is now considered doubtful after limping out of Newcastle’s match with Everton at the weekend with toe and groin injuries.

Liam Lawrence is out of the squad while John O’Shea is definitely out of the first leg and is a major doubt for the second leg in Dublin.

Darron Gibson is also a doubt, but Robbie Keane has returned to full fitness, and rediscovered some good form, as he has helped LA Galaxy into the MLS play-off final.