Ireland hoping to find their form against Les Bleus 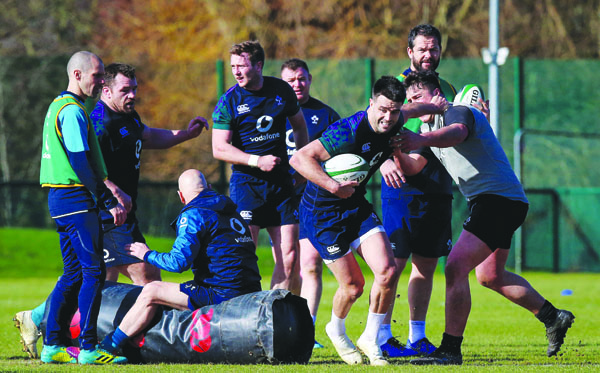 FOLLOWING last week's open training session at the Queen's Arena (The Dub) in Belfast, Ireland's rugby team will hope to find their form when they take on a resurgent France in the Six Nations at the Aviva Stadium on Sunday (3pm).

Joe Schmidt's sids has had a stuttering campaign to date, with their hopes of landing a second Grand Slam in as many seasons wiped out in the first game when England bulldozed their way to a 32-20 win in Dublin.

They did recover somewhat in a good win against Scotland in Edinburgh, but it was far from a vintage performance against the Italians last time out, despite scoring a bonus point win.

The boys in green haven’t scaled the same heights as 12 months ago, with this also being a World Cup year adding to anxious chatter about the team.

Ever the pragmatist, Schmidt is refusing to push the panic button and believes his side can find their form once again.

“In the context of the Italian game, we were pretty disappointed with a number of passes that went to ground and how untidy we were with the ball,” he admitted after the Belfast training session.

“I was actually pretty happy with the Scotland game.

“We probably aren’t as dismayed or as keen to change direction. We are still confident that we can work our way through this and deliver a couple of big performances in the last two games.

“The conversation is about performance, not personnel. The personnel isn’t much different from the team that was names Team of the Year and that achieved what they did last year.

“It’s just about building our confidence, getting our cohesion back and being accurate. If we can do that, then inevitably the direction of the team changes because they will be on the front foot with their confidence back.”

They will hope a home game against the enigmatic French can help them find that performance.

Les Bleus had a shocking start to their campaign – losing to Wales in their opening game at home despite leading 16-0 at the break before suffering a devastating 44-8 defeat to England.

However, Jacques Brunel’s side found their form in Round Three against Scotland with a 27-10 win so will be reinvigorated ahead of the trip to Dublin.

“I think they’ve got their balance right unfortunately,” Schmidt noted.

“My son played a season with (Romain) Ntamack a few years ago and he said to me that ‘we have this player…’ He is an incredible threat and his kicking game is really good. He has a couple of players around him that aren’t too bad either.

“It’s perfect for us to go back to the Aviva because you can’t right the wrongs of a few weeks ago, but you can certainly change the direction of how we approach the game with a confidence required to try and get onto the front foot.”