Janine so grateful for huge show of support 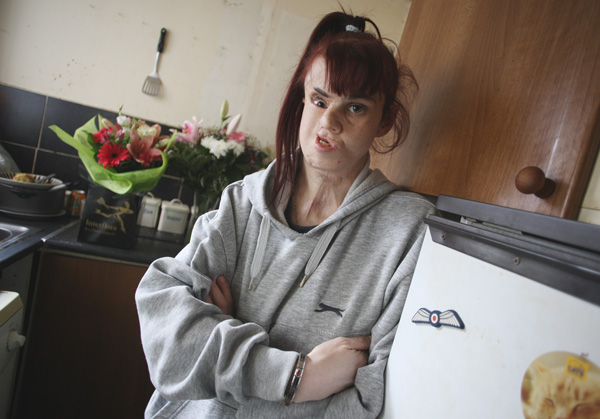 A NEW Lodge woman who has been verbally abused because of her appearance has thanked the readers of the North Belfast News for their support after her story appeared in last week’s paper.

The North Belfast News was the first news outlet to bring the story of Janine Howard – a mother-of-two who has suffered verbal abuse on the street as well as on social media.

The 33-year-old suffers from a facial disfigurement caused by leukaemia and a rare bacterial infection she picked up in hospital when she was just three-years-old.
Since we revealed the shocking story last week, Janine has been sent hundreds of messages of support on social media and many other offers of friendship.

A number of individuals and businesses have also been in contact with Janine, sending her flowers and offering other kind acts of generosity.

A grateful Janine is still coming to terms with the generosity of people, many of whom are strangers who have been touched by her story.

“I had been thinking of sharing my story and I contacted the North Belfast News because it is my local paper and obviously the abuse was happening in the local area,” she explained.

“I’ve had so much positive feedback. Another bunch of flowers was dropped off today by a complete stranger.

“I have had best wishes from as far as Derry. There have been so many messages from so many people.

“I shared my story not just for myself but for other people out there in my situation who suffer similar abuse to myself.

“It is not nice to bully someone because of their appearance. You are who you are and that is just the way God made you.

“The response shows that there are more good people out there than bad people.
“I want to say thank you to everyone. It is very much appreciated.”