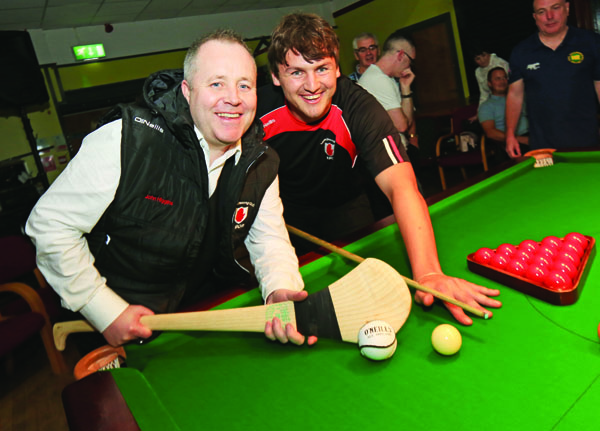 SNOOKER star, John Higgins was a guest at Lámh Dhearg clubrooms on Friday evening just weeks before the club’s 25 year celebration evening for the famous 1992 championship squads.
Coincidently, Higgins made his professional snooker debut in 1992 and the Wishaw native, who has visited the Roddies on a few occasions, was delighted to return to Belfast and new surroundings in Hannahstown.
“I’ve been in the game 25 years and it’s great that I’m up here at Lámh Dhearg a few weeks before the celebrations of the ‘92 success,” said Higgins.
“I’m delighted to be here, I always love coming over especially to play in the north of Ireland. I’ve played in the Roddies a couple of times and it’s great to come to another club and have a good night in Hannahstown.”
As well as landing 28 major honours, including four world titles in a successful career to date, Higgins has also managed eight maximum breaks of 147, the last of which came at the Titanic Centre in Belfast during last November’s Irish Open.
The Scot fondly remembers the occasion as his friend Sam brought his wife to see her first live snooker game and despite doubting his ability to deliver the maximum, Higgins left a lasting memory.
“One of my mates, Sam, his wife had never seen a game live,” recalled Higgins.
“She said to Sam, ‘I wonder if John will do a maximum today’ and Sam said ‘it will be rare if he does one’. Then funnily enough, I ended up doing one and that was her first game she had seen live.
“She is coming up tonight so hopefully she isn’t expecting another one tonight.”
Unfortunately, Higgins couldn’t replicate his maximum break at Lámh Dhearg but he will have another chance in November as he returns to contest the Irish Open event in the Waterfront Hall (November 20-26) with 128 of the best snooker players bidding to take home the Alex Higgins Trophy.
Higgins revealed that he has a great rapport with his fellow Irish opponents and enjoys the experience and craic that Belfast has to offer.
“The experiences I’ve had in Belfast have been brilliant,” Higgins revealed.
“I’ve played a couple of tournaments in the Waterfront Hall, which is a great venue. I believe it is going to be the new venue to the Irish Masters in November which I’ll be over at.
“I always have good craic over in Belfast and I’m friends with a lot of the Irish players and have a lot of good friends in Belfast. It’s always good to come over and play here.”
As well as his love for snooker, Higgins is a massive follower of Celtic and praised Brendan Rodgers’ achievements since taking over in May 2016.
Higgins believes that Celtic will face a tall order in their upcoming Champions League campaign but hopes they can try and sneak second spot or at least claim a Europa League spot and European football after Christmas.
“It has been amazing since Brendan [Rodgers] has come in,” said Higgins.
“Obviously after Martin O’Neill, who is another great Northern Irish manager and Neil Lennon. It’s great when you have somebody like Brendan Rodgers. We pushed the boat out and brought him in. We couldn’t have asked for any better last year, doing the treble plus being invincible – incredible.
“This year, getting through to the Champions League again is an achievement. We have another tough group with Bayern Munich, PSG and Anderlecht.
“You never know, we could definitely try and get Europa League or push for second but it would be a tall order.”
Higgins also paid tribute to local Celtic fans in Belfast for their dedication in travelling over on a regular occurrence to support their side.
“It’s incredible the love people have in Belfast and Ireland for Celtic,” said Higgins.
“To actually go over and travel every morning for the matches and even the night before and travelling back the night after.
“It is a lot of dedication for people to do it, but it just goes to show their love for the club.”
Higgins was presented with a Lámh Dhearg gilet during the evening and added he would wear it with pride.
The Scot revealed he has tuned in to watch GAA games since Sky Sports began their deal back in 2015.
Although admitting he doesn’t have a favourite county as such, Higgins says he just enjoys watching it and was pleased to hear that his native country featured in the TG4 All-Ireland Ladies final in Croke Park back in 2015 when the Scots were defeated by Louth.
“I’ve watched a few GAA games,” he confirmed.
“It’s a tough sport, but an enjoyable game to watch. I don’t have any particular county I support.
“I’ve got a few friends from Lurgan and they’ve went out a couple of times to watch me play and they’re big Armagh fans, but no I don’t have a favourite team I just like watching it.
“It’s great to hear that Scotland got to an All-Ireland final in Croke Park and hopefully the GAA will continue to grow there cause it is a good game to watch.”