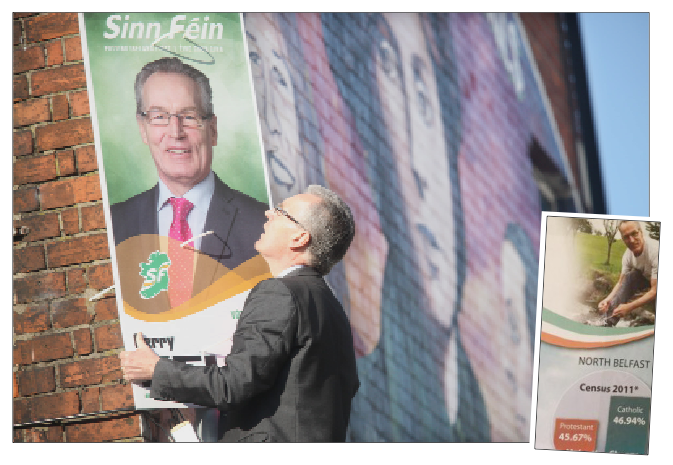 Sinn Féin’s Gerry Kelly failed in his bid to unseat the DUP’s Nigel Dodds in North Belfast, but he says the leaflet controversy was not to blame

A SINN Féin election leaflet that outlined census figures showing a Catholic majority in North Belfast should not have been used, Gerry Kelly has said.

In his first in-depth interview since losing to the DUP’s Nigel Dodds, Mr Kelly said “in retrospect” election literature showing a breakdown of religion in the constituency should have been withdrawn.

The political leaflet became one of the major talking points of the election and saw Sinn Féin accused of sectarianism by their political rivals. But speaking about the use of the figures, the MLA said it was right to address the demographic changes in North Belfast and the point the party was making was not sectarian.

“I don’t think it’s well understood what happened,” he said. “If you look at our material up to that point the language used was nationalist and unionist, and we did use the graphs and were trying to show a demographic change because there is a demographic change that reflects Belfast.”

He said Royal Mail staff told their activists only the census figures could be used.

“When that was brought to the post office for the freepost, they said that those figures were census figures, and census figures are couched in terms of Catholic and Protestant and other, and therefore we had to use that.

“I think, in retrospect, the decision then probably should have been to withdraw the graph rather than put it in, because it did give an argument to our opponents, whether that was the SDLP or the unionists. In honesty, I don’t think I would have made that decision (to publish) because I do not like the term Catholic and Protestant in that sense.”

He accused the DUP of hypocrisy in raising it as an issue.

“The unionists, using their terminology, call themselves the Protest Unionist Loyalist community. They deal with the reality of it and there’s not a word about it, yet we are attacked, ironically by the DUP. We are not sectarian, but it’s an honest thing to say that in a general sense most Protestants will vote unionist and most Catholics will vote nationalist.

“It became a sloganised battle then and that’s the difficulty. I don’t blame people but you argue in headlines and you don’t argue in details. The letter with the figures said it all because it dealt with anti-sectarianism and that’s the way I am.”

Mr Kelly added that he didn’t believe the decision to publish the leaflet had cost him the election.

A Royal Mail spokeswoman said they would investigate the claims.