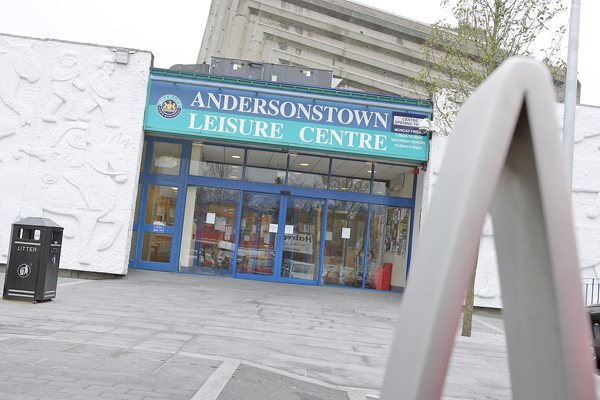 CLOSING: Andersonstown Leisure Centre is to be redeveloped

THE Andersonstown Leisure Centre will close on Monday to facilitate the £25 million redevelopment of the building. Due to open in summer 2019, the new centre will focus on family fun and will feature a number of new waterslides and even a surf machine.

There will also be range of other provisions such as new fitness studios and outdoor pitches. With the planning application submitted at the end of March, the Belfast City Council’s Director of Property and Projects, Gerry Millar, is hoping that work will begin next month.

“We need planning permission first and foremost, so we’re hoping to get that turned around after a three month period,” he said.

“We’re hoping that planners will make the decision at the end of June. During the application process people can write in and the planners can take cognisance of whatever they say. All being well we can let the contractors get started.

“We’ll do a soft strip initially over the summer and once the internals are taken out we can do the hard demolition in September which should be finished before Christmas.”

Undertaking a project on this scale is no mean feat and Mr Millar said that there would undoubtedly be some issues encountered during the build, but he insists that planners have accounted for all possibilities.

“We’re not anticipating any significant problems,” he said. “There will obviously be some traffic problems on the road itself but that’s not just to do with the leisure centre. We have the Belfast Rapid Transit system coming up and then potentially Casement Park could start during this build, but we are looking at traffic management measures to deal those possibilities.

“It’s also important that we make it clear that the leisure centre is not encroaching on residents during or after the build.

“We’re utilising the space we have much more efficiently. The builder will take noise pollution into consideration but we won’t be working directly beside people’s houses.”

As for local businesses, Mr Millar is confident that the development will be a positive influence in the long run despite some potential difficulties in the short term. “This is really going to give people a new reason to visit Andersonstown,” he enthused.

“In the short term there will be some difficulties while the work is going on, but we expect to see footfall increasing and more business opportunities being created. We can already see some businesses in the area starting to refurb, so I feel like they are confident that this will be a positive thing.”

While Derry-based firm Heron Bros have been appointed to carry out the work on the new leisure centre, the Council are working to ensure that the build benefits the local community during its completion.

“The contractor who is doing the work for us is committed to a number of social clauses,” Mr Millar insisted. “Some of the social clauses include creating employment and apprenticeships in the local area, others are about accommodating businesses by purchasing products and materials.

“We’re still in negotiations with the contractor about those clauses, but we want them to work with the local community. “This whole project is about trying to lift West Belfast’s aspirations. We want it to be a growing area where people will want to come to.”