LIVES WELL LIVED: Pauline Honey, civil servant, volunteer and citizen of the world with a zest for life 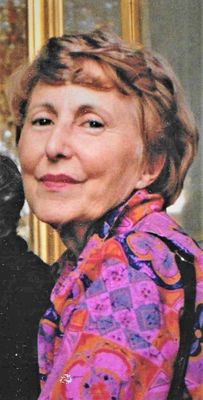 FROM RUSSIA WITH LOVE: North Belfast stalwart Pauline Honey who passed away recently.

Pauline Honey was a woman of many talents.

The many visitors she welcomed to her North Circular Road home will confirm that her baking was unrivalled. Her soups were legendary and she was the queen of desserts.
When her nieces and nephews were young, she made clothes for them - and then formal dresses for the girls when they got older.

She was a perfect example of an older, grander, tougher, simply better generation who came through hard times yet still exuded a zest for life. In later years her ailments were many - Parkinson’s, osteoporosis, macular degeneration - but they never dimmed her feistiness and zeal. This was one woman who always knew what was going on.

Pauline and brother Tom were inseparable. Tom, who predeceased Pauline by 11 months, was a noted poet, and references to her are scattered throughout his books.
It’s no surprise that after his death, Pauline’s health deteriorated and she moved out of the home they shared for many years into Nazareth Care Home on the Ravenhill Road, where she was so well cared for.

Pauline was born on the 28th of June 1928, the second of four children who were brought up by hard-working parents Sydney and Ellen in the New Lodge area of North Belfast. She had a delightfully happy childhood with her three brothers - Tom, Jim and Peter. She went to school in Randalstown after being evacuated during the Second World War, and retained strong bonds with her cousins there.

She joined the Civil Service and somehow this city girl found herself in the Department of Agriculture, advising farmers on how best to breed cows. She might have enjoyed work, but she loved retirement - “having every day to myself,” she said.

She got involved with Cavehill Bowling Club and volunteered at Newington Day Centre where she met a great group of girls who she loved to travel with. Indeed discovering new lands and cultures was one of her favourite things, and she travelled Ireland and many lands abroad with friends and brother Tom. She even travelled up the Amazon river - and this picture of her was taken while she was attending a lecture in St Petersburg’s Winter Palace.

Pauline, who lived under the shadow of Cavehill, loved gardening. In one of Tom’s poems, they are returning from buying flowers in the garden centre when they stopped for petrol and Pauline pointed at the glorious Cavehill covered in golden gorse. "How much would you pay for that?" she asked him.

When she became frail, Tom put a rail up so she could still visit her beloved garden, where bird feeders were always full. A friend said: “The poor birds must be wondering what has happened now all the feeders are empty.”

Pauline was deeply religious and for decades helped ensure Holy Family parish churches always had arrangements of fresh flowers. Like her brothers Tom and Peter, she spent many years as an active member of the Legion of Mary. She loved saying the Rosary - so much so she carried two sets of Rosary beads - a good heavy one and a not-so-good light one in case of emergency!

Pauline was buried with brother Tom and their parents in Milltown Cemetery after Requiem Mass at St Thérèse de Lisieux church on Somerton Road, which was celebrated by Parish Priest Fr Paul Strain.

As her friends all agreed, she’ll be well looked after by her three brothers in heaven.
Pauline will be sorely missed by her sister-in-law, nephews and nieces, and her wide circle of great friends.