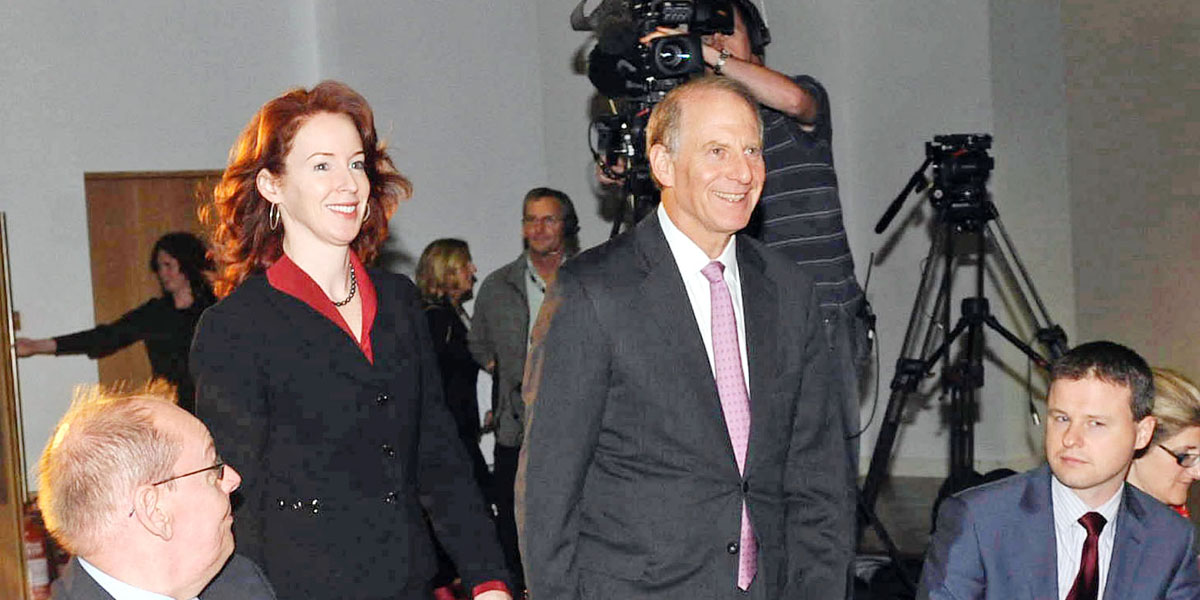 US diplomat Richard Haass, with Meghan O'Sullivan, a Professor at Harvard University, arriving at the Europa Hotel to chair all-party talks

Politicians in the North have dealt with bigger issues and reached an agreement, Sinn Féin’s lead negotiator Gerry Kelly said, after his first meeting with US diplomat Richard Haass on Tuesday night.

It’s been a decade since Dr Haass was last involved here. He was previously President Bush's special envoy.

During the all-party talks dealing with flags, parades and the past, he will be assisted by Harvard professor Meghan O'Sullivan, who served as a senior US diplomat in Iraq, and Charles Landow, an official at Dr Haass's New York think tank.

Speaking to the Andersonstown News, Gerry Kelly said he expected a hectic three months before the talks break up at the end of the year – hopefully with agreement.

“The first meeting is over and lasted an hour with Richard Haass and Meghan O’Sullivan,” he said. “It was an introductory meeting, working out the schedule and there will be round table talks involving all parties this Friday.

“It will be a hectic three months. We are in resolution mode. These are toxic issues. It comes down to equality, parity of esteem and respect.

“We welcome the timeframe. It gives us something to aim for. We have dealt with bigger issues in the past and we can sort it out if the political will is there.”

Mr Kelly said he was hopeful of a resolution come Christmas.

“Meghan O’Sullivan is vastly experienced and Haass has been here before,” he said.

“The talks are confidential. We can’t go into detail, it needs space.”

On the issue of parades Mr Kelly said Sinn Féin have  been approached by residents’ groups, but said until there’s consensus over controversial parades, a regulatory body is required.

During the Belfast City Council debate over the flying of the union flag last December he said the Sinn Féin position was “both flags or no flags”.

The designated days agreement was a compromise, he insisted.

“All flags need to be discussed,” he said, referring to the Haass talks, “union flag, tricolour and paramilitary flags and where they are flown.”

He said the aim of the talks was to come to a conclusion and stick to that agreement when it’s made.

“These are important issues because they are outstanding and toxic issues and their effects are much bigger than their importance.”

Speaking after leading a party delegation to meet Richard Haass, also on Tuesday night, the SDLP’s West Belfast MLA, Alex Attwood, said the US diplomat should consider coming up with his own proposals if local parties cannot find agreement before Christmas.

He said: “At the end of it, yes, put it up to the parties. If they can't agree, give best advice.

“We said very clearly to him that if the parties can't agree come Christmas, then you give your best advice and best recommendations about how to deal with these issues that are contentious.

“But whatever happens, don't go home leaving it to the parties to sort it out.”

Mr Attwood added that any proposals from Mr Haass should be “embedded in the values of the Good Friday Agreement”.