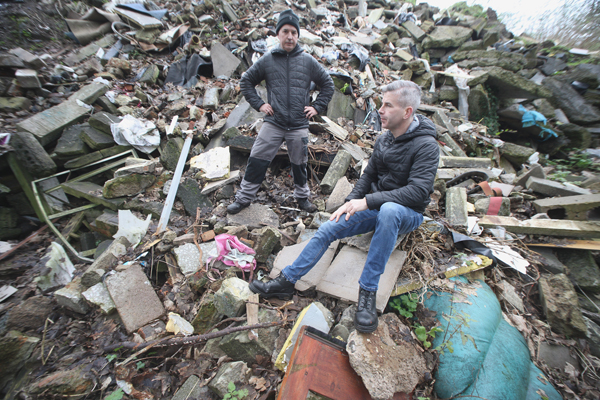 DEVASTATED: Cllr Steven Corr with Milltown resident Junior McKee, who discovered the jaw-dropping extent of dumping on the site

AN “environmental nightmare” has been unearthed on land off the Falls Road, sparking fears that shocking levels of illegal industrial dumping will contaminate a nearby river.
The “mountain” of dumped material was discovered by Milltown Row resident Junior McKee whose property faces the land that is being used as a dumping ground. He has alerted the relevant authorities. The site is just yards from the St Gall’s GAC clubrooms. Belfast City Council waste bags, household fridges, cemetery headstones, construction rubble, wood and huge amounts of other waste have een dumped on to the land and the massive mound is sliding close to the Ballymurphy Stream.
The land is known as Milltown Glen and is situated between Maguire’s Garage, Milltown Cemetery and the Bog Meadows.
Michael Culbert of St Gall’s GAC said that the issue of land ownership needs to be clarified. “There is a gateway that runs from Milltown Cemetery, a lane, and it’s that land that is being dumped on,” he said. “We want a clean environment, we care about the environment. We have all age groups at St Gall’s, from six-year-olds up and have been in this area for approximately 50 years. We have never seen the like of this. This is a beautiful glen, you have the Bog Meadows and here it’s the epitome of fly tipping. This is going on in the heart of West Belfast and it’s not on. We need someone with responsibility to hold whoever is doing this to account for the contamination of this area. We don’t want the river polluted. “It needs to stop and it needs to be cleared up and now our local councillor Steven Corr has taken up this issue.”
Ulster Wildlife Nature Reserve Officer Deborah McLaughlin told the Andersonstown News that the dumping has got worse since the start of the New Year.
“This is an absolute eyesore and I have contact DAERA (Department of Agriculture, Environment and Rural Affairs) in relation to it as a lot of the rubbish will end up in the stream,” she said. “We are concerned at the level of fly tipping going on and concerned for health and safety. DAERA are aware of the issue and at the minute we are waiting to hear back from them.”
Local Sinn Féin Councillor Steven Corr said the illegal dumping is “destroying the landscape”.
“What we are seeing is a localised environmental nightmare,” he went on. “We are only a few feet away from this stream being contaminated. I can’t get my head around why somebody thinks it’s ok to do this. There are lorry loads of rubbish being dumped down a riverbank, killing wildlife as it goes. I’ve never seen anything like this, on this scale, in West Belfast. This is fly tipping on an industrial scale, there is industrial waste on the site, glass, headstones. There is confusion as to who is responsible for the land but we would be calling on the Rivers Agency and the NIEA (Northern Ireland Environmental Agency) to work with us. Belfast City Council have offered support as their bags are also being dumped on the site. This land needs to be secured as a matter of urgency.”