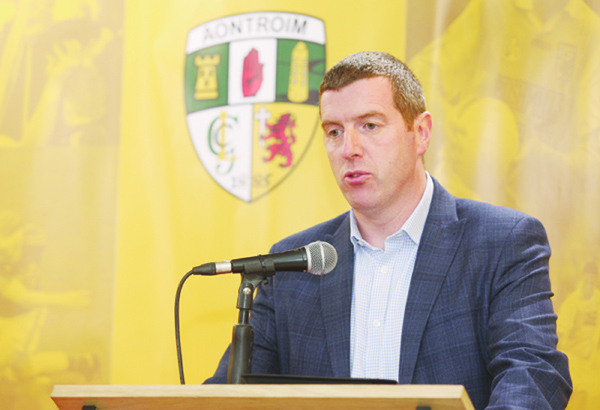 ANTRIM chairman Ciaran McCavana says he understands the concerns of dual clubs, yet given the time constraints, it was always going to be a tough task to keep everyone happy as Antrim published a revised fixture list for clubs on Tuesday.

Last Friday, the schedule for a condensed league and championship was revealed with many dual clubs left with a major headache as players will face a hectic run of games from the get-go.

Over the weekend, the GAA announced that it was moving its return to play date forward to July 15 and this extra fortnight has eased the fixture congestion in Antrim somewhat with a round of league games in hurling and football to take place on July 19 and 22 respectively before the Football Championships begin on Sunday, July 26 with a new round-robin format.

The leagues will have no promotion or relegation this year and have been revised to remove a quarter-final stage in some divisions, with the round of games in each code now before Championship removing some potential clashes down the line.

It is still not ideal with the latter stages of the league seeing dual clubs fielding on consecutive days for a number of weeks, but the county chairman insists it was always going to be a difficult task to juggle the needs of clubs and county teams.

“You can’t please everyone and I did put it out to the clubs in a county meeting we had a few weeks ago to put forward proposals,” he insists.

“Not all did so it’s part and parcel of the role to have to just make a call and get things moving.

“We have taken this year as an opportunity to try something new, with the aim of providing more Championship games for our players.

“Be under no illusions, we are aware that the schedule is tight and we have tried to get the correct balance between providing a meaningful Championship and a league format for the majority against the constraints imposed to accommodate dual players, county players and Covid-19.

“I would ask clubs to sit down with both their hurling and football managers to ensure that dual players are managed in a responsible manner.

“In reality, we are trying to fit five into four and we are aware of potential clashes at the quarter and semi-final stage, if these clashes do arise, we will have to find a solution.”

Last weekend, Derry chairman Stephen Barker received widespread praise for his stance that their county championships will run up until October 11, just one week before inter-county action is set to resume.

Some clubs in Antrim have questioned why it’s not a similar case here and made their feelings known as it came to light a number of objections were raised to the initial schedule earlier in the week.

The county chairman outlined his reasons, stating that a no promotion or relegation league will give players on wider panels games, while he is committed to the clubs having full use of their players before they return to county training ahead of some key league fixtures that could see Antrim promoted in both hurling and football before the Championships.

He also acknowledged the potential threat of a second wave of Covid-19 that some scientists predict would hit in September and potentially force the 2020 county championships to be abandoned midway through, so is keen to ensure they are finished.

“We are trying to accommodate both club and county,” he explained.

“We are in a (Division 2A hurling) league final to try and get into the top division in hurling and we are in a good position to get promoted from Division Four in football.

“We believe that those games will likely be played before the (All-Ireland) Championships so we are trying to be fair to both.

“Another thing is that we are running a league after the Championship so we are trying to accommodate that too.

“Also, we are wary that a second wave (of Covid-19) could come in September and pushing them back any later could end up seeing them scrapped halfway through so that’s something we have had to consider.

“I understand the issues, but we have been trying to put five into four on this with Antrim being a dual county.

“I was a dual player myself so I understand the problems. We can’t allow for Covid-19 to come back so that is a big reason for it.

“As a county chairman, I’m glad we are back arguing about fixtures in a way as at one stage we were looking at nothing happening at all this year.”

The GAA is expected to publish the inter-county schedule in the coming days and that will add further clarity to what has been an uncertain year given all that has happened with the coronavirus.

McCavana reiterated his belief that the earlier start will help ease the burden, but is sticking to the dates for the finals to ensure the county managers have time with their players.

“Other county teams seem to be training before the designated date (September 14) but we aren’t allowing that so to let the clubs complete their Championships and also allow our county teams four weeks of a run-in before the league matches,” he insisted.

“It would be a big boost for Antrim if we can get back into Division One in hurling and up to Division Three in football.

“Hopefully, that could end up with a good Club Championship and success for the county teams that would make it a good year all things considered.”