McGuigan confident ‘The Jackal’ can make a big statement 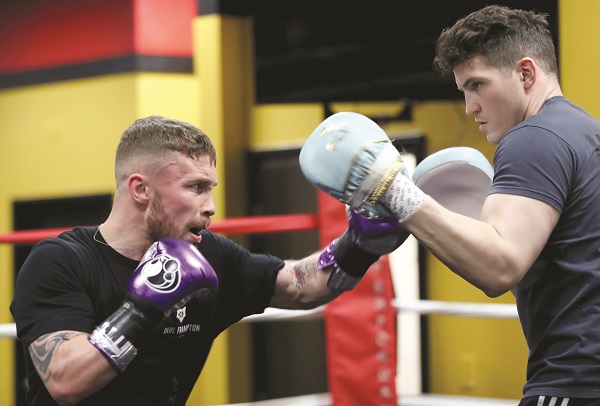 Shane McGuigan doesn’t believe the loss to Leo Santa Cruz has overly dented Carl Frampton’s confidence ahead of his ring return this weekend
SHANE McGuigan expects Carl Frampton to score his first stoppage win in two and a half years when he takes on Andres Gutierrez on Saturday night.

Frampton is without a win inside the distance since the last time he fought at the SSE Arena, a fifth round win over Chris Avalos in February 2015 and his trainer believes ‘The Jackal’ can produce a repeat performance against Gutierrez to put his defeat to Leo Santa Cruz in Las Vegas firmly in the rear view mirror.

“We can’t afford to have a slip-up here,” warns McGuigan.

“This is to be a big-statement performance.

“Gutierrez has been dropped once in his career by an out-of-nowhere shot – a big uppercut and he was nearly gone (against Mario Antonio Macias). But he got up and showed he has great powers of recovery, so it’s going to be a hard fight because he can punch. He definitely gives away rounds, but he can punch.

“I think Carl needs to be switched on, pick up the rounds, break him down and knock him out late in the fight.”

Picking Frampton up after his first career defeat, that majority decision reversal to Santa Cruz in their WBA title rematch at the MGM Grand in January hasn’t been as tough a job as it could have been.

Frampton’s down-to-earth nature ensured that despite the titles and plaudits he has picked up in his career, he never got above his station and that has made dealing with his first career disappointment slightly easier.

“It’s a change in dynamics, but he’s the same guy coming into the gym,” reports McGuigan.

“Even after the unification (against Quigg), the big pay-per-view fights and money fights, he still comes in with no ego. It’s great to see.

“The fact he’s had a loss, there’s a little bit of a dent in his ego, dent in his confidence, but he’s got to learn from it and come back.”

His comeback opponent took much longer to pin down that originally hoped, with Santa Cruz not keeping his word of facing Frampton for their third installation in Belfast while IBF champion, Lee Selby had a commitment to face mandatory challenger, Jonny Barros.

That left little wriggle room with those on the cusp of their title shot reluctant to take a massive game against last year’s Ring Magazine Fighter of the Year in Belfast, but McGuigan believes they have found the perfect opponent for Saturday.

“We had moments where we didn’t know if this was going ahead,” he admitted.

“We always had this date planned, but it was about getting the opponent signed. We had a few options, but I think Gutierrez is the perfect guy.

“The Lee Selby fight didn’t materialise. He had a mandatory. Pay-per-view didn’t want to pick up a third showdown with Santa Cruz.

“They are both on pay-per-view money so you can’t have a trilogy and not get paid what you were getting or even more for the first fights. It was a bit of a shame, but this is a potential banana skin for us.”

He continued: “You’ve got Oscar Valdez (WBO), Gary Russell Jnr (WBC), these guys and these big names. They want the fight, but they also want it on their terms.

“If you go below and look at the prospects, you have some coming through like Joseph Diaz who’s a slick southpaw, a good quality fighter, but they will never take a fight with Frampton because why would you?

“You want to get your opportunity with a belt and now he doesn’t have a belt, it’s like the ‘who needs who?’ club. Obviously they know they’re going to get well paid to fight him, but then it’s a big risk for them as they would get knocked out against Frampton and lose their chance.”

Frampton’s plan on Saturday is to win, look good and set-up a title challenge for later in the year.

They hadn’t planned on being in this position however as they were fully confident of victory over Santa Cruz for a second time, but it was not to be and McGuigan makes no excuses for their defeat in Las Vegas.

“They got it tactically right and we didn’t,” he accepts.

“Me and Carl analysed the first fight and we didn’t expect him to take away Carl’s attacks like he did, to step back and punch long shots. He did a really good job.

“Carl just wasn’t on point. You have bad days in the gym, you just hope you don’t have them on the main stage, but sometimes you do.

“Carl has had 23 fights now and only really had two off nights.

“At the top level, if you have a slightly below par performance, you get beaten. It was a majority decision in a close fight. I definitely thought he lost the fight, but he will come back.”