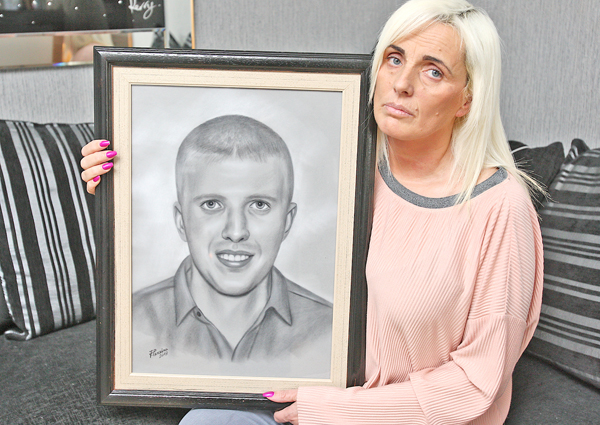 Tracy Carnahan with a treasured portrait of her son Sean Paul

THE mother of a Belfast man who died in controversial circumstances in the City Hospital in July 2013 is calling for a fresh inquest into her son’s death.

Sean Paul Carnahan died in the City Hospital in July 2013 four months after he tried to take his own life while under the influence of a legal high. As the Belfast Media Group reported at the time, the 22-year-old suffered serious brain injuries in the incident and then developed a number of infections and became malnourished during his time in hospital. A September 2015 report into Sean Paul’s death identified several “actions/ omissions” in his care, which may have been contributing factors.

Sean Paul’s mother Tracy said: “I feel there have been cover ups about Sean Paul’s death and I won’t stop until I get to the truth. I have a new legal team representing me now and I have spoken with Michael Mansfield QC. I feel that he and his partner Yvette Greenway have really listened to me. Yvette is helping me organise a rally for Sean Paul on March 11 at 3pm. The last inquest was a farce and insult to Sean Paul, me and his brothers and sisters.”

Yvette Greenway first heard Sean Paul’s tragic story at a Silence of Suicide (SOS) meeting in Belfast last year. She said: “Why Sean Paul attempted to take his life is one story. Why he was apparently failed by the medical profession and, subsequently, Tracy believes, the coroner, is another and one which Tracy is keen to bring into the public arena, not just for Sean Paul’s sake, but for the benefit of others who feel their own experiences do not demonstrate the truth, justice and accountability we are all entitled to expect.”

Tracy added: “Please support our rally in Sean Paul’s memory and our protest about his treatment at the hands of the City Hospital.”

Tracy’s solicitor, Pádraig Ó Muirigh, said: “‘I have been instructed by my client, Mrs Carnahan, to review the findings of the coroner. On receipt of all the relevant documentation relating to the inquest I will advise my client on the merits of an application to the Attorney General to request a fresh inquest into the circumstances of the death of her son.”