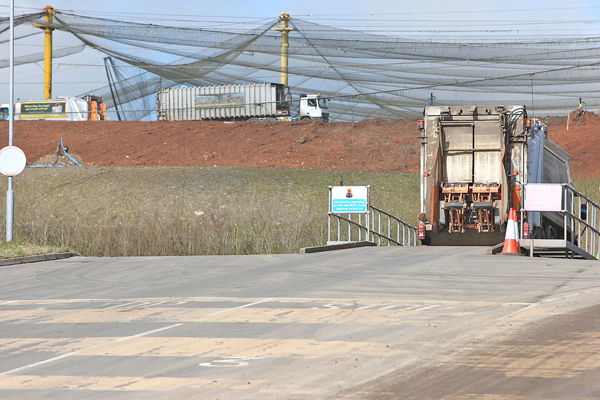 SUSPECT: The nearby Mullaghglass landfill site has had past problems with odour and could be the source of the new gas smell

OPERATORS of a local landfill have said it will investigate “any complaints associated with the site” after it was linked with a mysterious smell that has engulfed the Colin area.

Residents throughout the area have complained of a gas-like smell in recent weeks and are worried about any health implications. The smell is particularly heavy near the entrance to the Mullaghglass landfill site on the Mullaghglass Road, which runs directly above the Lagmore and Mount Eagles housing estates – the areas most badly affected by the smell.

It is the second time Belfast City Council have had to investigate an unpleasant, and potentially harmful, pollutant in the Colin area in the past year.

In November last year, Council Environmental Officers were called to investigate an odour that smelled like a ‘damp cloth’, the cause of which was found to be a factory at the Cutts.

Local Sinn Féin Councillor Danny Baker said that, while the odour from the factory had largely subsided, the more recent problem is believed to be linked to Mullaghglass.

“That part of the industrial estate is being monitored by the Council and the NIEA (Northern Ireland Environment Agency) – that’s ongoing, but this is completely different,” he explained.

“Going by the reports we think it might be coming from Mullaghlass landfill. With the way the weather is changing, the bacteria in the soil might be causing the smell. Lagmore and Mount Eagles are getting it pretty bad.

“It almost smells like gas, but Phoenix Gas have been out and confirmed that it’s not gas.”

He added: “I don’t want to scaremonger, but we have to question if it will have an impact on people’s health and what can be done to mitigate it.”

“The big issue is that the smell is actually getting into people’s houses,” said Cllr Baker.
“People are having to close their windows, they can’t put their clothes out on the line – it’s disastrous. I’ve had more complaints about this odour than the last one.

“Council are now going to speak to the NIEA, and they want people to keep reporting it because as soon as the report comes in they will try to identify the source and put pressure on whoever is responsible.
“It’s important that people report it to the Council, but it’s important, if they do think there is a gas leak, that they don’t take any chances either.”

A spokesperson for Alpha Resource Management, which runs the Mullaghlass landfill site, said it “operates a non-hazardous landfill site which is regulated by the Northern Ireland Environment Agency at Mullaghglass”.
The spokesperson continued: “The site operates to the highest environmental standards and is constantly monitored to ensure compliance with permit requirements.

“The company takes its environmental responsibilities seriously and any complaints associated with the site will be investigated.”