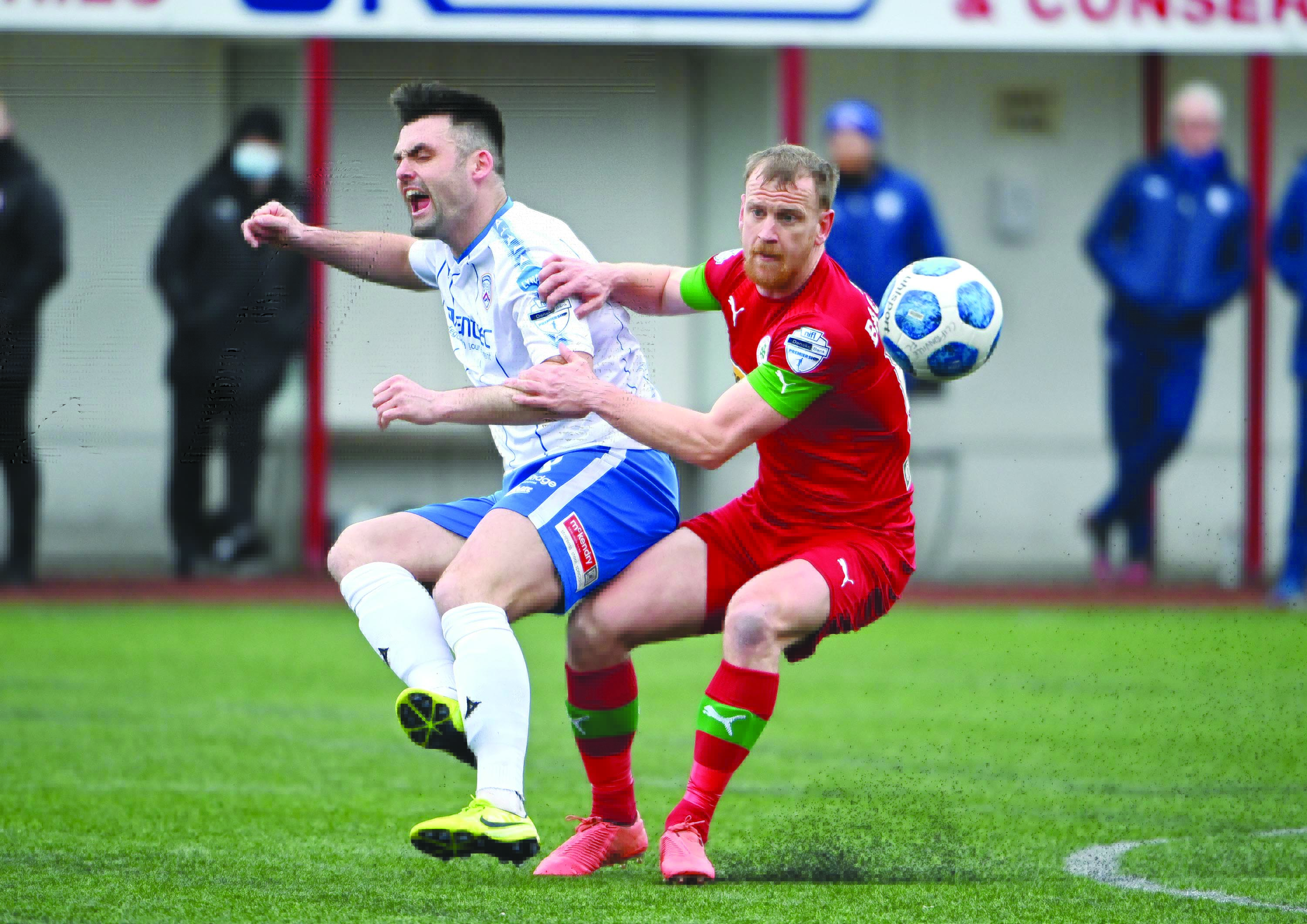 CLIFTONVILLE manager Paddy McLaughlin has called on his players to head to the north coast for today’s game at Coleraine (3pm) with the same mentality as their previous visits as they seek to narrow the gap on the Bannsiders.

Oran Kearney’s side sit six-points ahead of the Reds going into the first post-split encounter and McLaughlin feels his side have been unlucky in previous visits to the Ballycastle Road – calling for a similar mentality on Saturday.

“It’s a tough place to go but we’ve went up there the last time two times and did really well and put in a brilliant performance and we’re probably disappointed not to win the game. It’s important we go up with the same mentality again.

“It’s a tough place to go but the form our boys are in, the way our attacking play is and the way we’re defending, we’re ready to take on anybody at the minute. This will be the toughest test we’ve had in a while and I’m sure they will be disappointed and frustrated at getting put out of the Cup. But it’s important that we just focus on ourselves and go do the business.”

🎥 Supporters are alerted to live streaming information for Saturday's Danske Bank Premiership fixture at The Showgrounds.

Liam Bagnall should be available to return to the starting line-up should he be required after McLaughlin rested the midfielder for Tuesday evening’s Irish Cup win over Portstewart.

The Reds’ boss insisted that Bagnall was keen to play but emphasised the importance of protecting the player for the remaining fixtures this season.

“You know what ‘Bags’ is like. It will take some injury to put him out and a lesser man would probably be out for a few weeks,” he added.

“He’s put his body on the line for us every time he steps on the pitch. He’s a phenomenal player and has a phenomenal attitude towards playing for his team. I made the call to take him out of the firing line, but it will take some injury to put Bagnall down because he is that hearty.

Following Tuesday evening’s 5-1 victory over Portstewart, McLaughlin credited his team for guarding against complacency and paid tribute to the side from the north coast for staying in the game for a long time.

“You’ve got to give our boys a lot of credit for their mentality coming into the game on the back of a good performance on Saturday.

“Fair play to Portstewart, they stayed in the game up until we scored the third goal and you’ve got to give them full credit.

“They’ve had four or five weeks to prepare for this one particular game. It’s probably not fair that they’ve had no competitive football, but they’ve been focused on this game, whereas we’ve had 12 big games in-between. They held their own for long periods, but I think the fitness levels of our boys probably shone through in the end.

“At 2-1 it was nervy for a couple of minutes until we scored the third goal, but I think once the third goal went in it probably deflated them a wee bit and it was probably our security and it put an end to the contest. Up until then you had to give Portstewart all the credit in the world.”

McLaughlin was pleased to see his front players continue to get amongst the goals and paid tribute to Daire O’Connor and Ryan Curran in particular.

“It was brilliant for Daire – he’s played well for a long time,” he felt.

“His build-up play has been excellent, so he probably needs to add goals and assists to his game and he’s done that tonight.

“I’m delighted for ‘Currany’ (Ryan Curran) because he is one of the top goal scorers in the division and he feels a lot of disappointment if he doesn’t score in any particular game, so it was good to see him scoring tonight because he’s been our leading striker since Joe has gone out injured and Michael (McCrudden) coming in alongside. The two of them have been fantastic.

“We’ll hopefully have Paul O’Neill back soon enough, so it is a good time for our front men to be hitting top form.

“Currany has been excellent all year, Michael has been superb this month, Daire chipping in with goals and another 90 minutes under Daniel (Kearns) belt. It’s a good time that our forwards are hitting top form.”

Darren Hyland joined fellow youngsters Odhran Casey, Stephen McGuinness and Lee O’Brien in making an appearance from the bench and McLaughlin insists it is a priority of his to keep blooding youngsters through to the first team.

“The young players at the club have been superb and fantastic,” stressed McLaughlin.
“Odhran Casey, Stephen McGuinness at 18 years of age and 17 (respectively) and young Darren Hyland coming in at 18 – it’s important we keep blooding these young players into the squad because they are the future of the club.

“It’s something I want to keep pushing at the club, to keep bringing the young players through.

“It’s good signing quality players in January but we’ve got those players too and we want to keep giving them experience because they are the future of the club.”