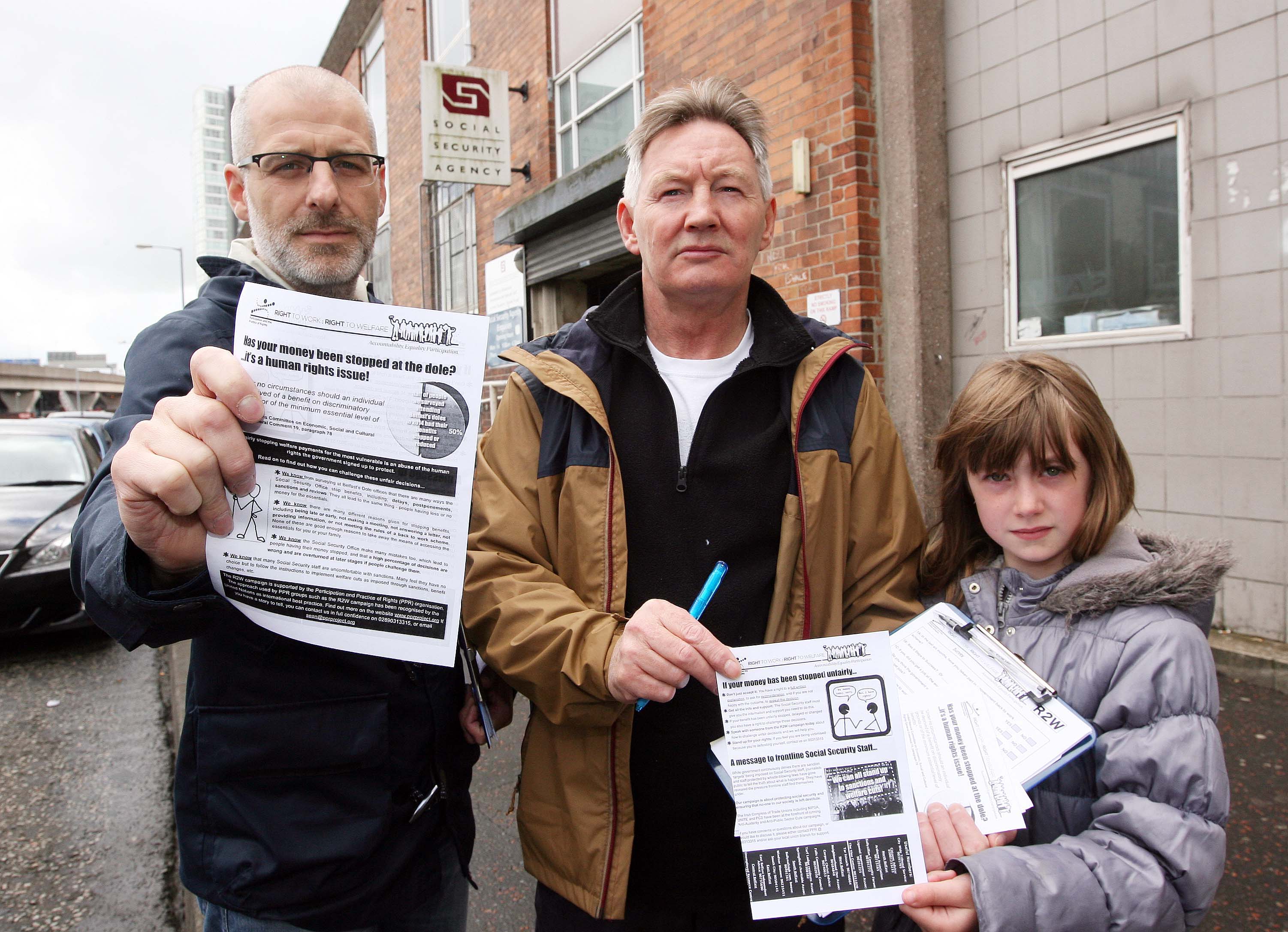 Dessie Donnelly and Flair Campbell of R2W with Sorcha Campbell

Benefits claimants in North Belfast are being disproportionately penalised compared to other areas, new figures have revealed.

The North Belfast Jobs and Benefits Office on Corporation Street imposed a total of 434 Jobseeker’s Allowance sanctions between April 2014 and April 2015, the highest number of sanctions among 35 offices across the north.

Despite having the highest number of sanctions, latest claimant information from the Department for Social Development (DSD) shows that in the month of February the Jobseeker’s figure for the Corporation Street office – 3,500 claimants – was significantly lower than other areas including Newry (4,260), Foyle (4,530) and Andersonstown (4,930). Those figures are skewed by the fact that the Shankill office also takes on claimants in North Belfast while covering West Belfast, and the Falls Road and Andersonstown offices are recorded separately.

However, the ratio of sanctions on claimants is still significantly higher in North Belfast compared to other areas where claimant numbers are high. Newry, for instance, saw 118 sanctions, Foyle 220 and Andersonstown 190.

That trend also seems to stretch to Newtownabbey where there were 404 sanctions issued with the last available figures showing a total of 1,550 claimants.

The figures do no include sanctions on claimants of Employment and Support Allowance or Disability Living Allowance or Personal Independence Payment, which the department does not gather information on.

The figures have sparked a claim from campaign group Right to Work: Write to Welfare (R2W) that benefits claimants are being pushed towards foodbanks.

Pointing out that nearly 9,000 people have received help from food banks over the past two years in Belfast, while Social Security claims were denied 19,388 times last year, R2W’s Sean Brady said: “Every day, at Corporation Street and every other dole office, people have the lifeline of social security money cut. These arbitrary decisions force families into debt and poverty. They require action now to protect the rights of the most vulnerable rather than rows at Stormont about what might happen next.”

However, a spokesperson for the Department for Social Development hit back at the claims that people were seeking the support of food banks as a result of sanctions and said that Social Security Agencies offered a hardship payment for anyone who found themselves in financial hardship while offering benefit advice at a large number of foodbanks across the north.

“457 sanctions were enforced at Corporation Street JBO over the 12 month period between April 1, 2014 and April 30, 2015,” the spokesperson said.  “However, it is important to note that this is the number of sanctions enforced, not the number of claimants who were sanctioned. Individual claimants may have had more than one sanction imposed during this time.

“Benefits sanctions are a statutory function of the Department for Social Development and are only imposed by an appropriate public servant after proper consideration of all relevant factors. Sanctions are awarded because a person has failed to comply with the terms of the Jobseeker Agreement, to which they have previously committed and are fully aware of their responsibilities.

“Sanctions can be imposed for a number of reasons, including where a claimant does not show ‘good cause’ when refusing to apply for, or accept employment, when asked to do so.”