Olympic heartbreak for Conlan as judges steal his medal 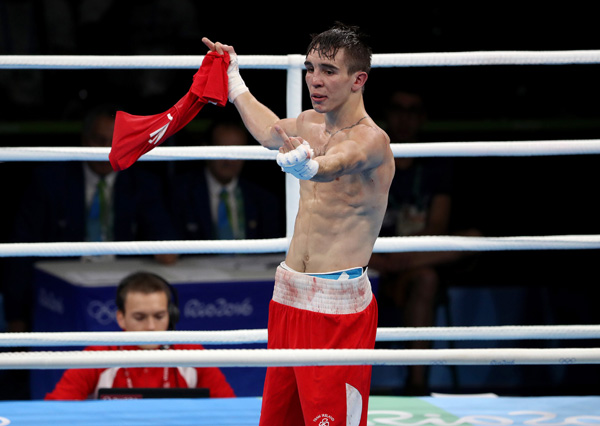 THERE will be no Olympic gold medal for Michael Conlan as the Clonard man had his dreams shattered by the three judges yesterday as they saw fit to award Russia’s Vladimir Nikitin a unanimous decision in the bantamweight quarter-final.

It was hard to fathom how they came to that conclusion with all three giving Nikitin a 29-28 win in a contest that appeared rather straightforward with Conlan landing the greater number of shots as evidenced by CompuBox stats afterwards.

Unsurprisingly, a devastated and seething Conlan lashed out at Olympic boxing’s governing body, AIBA, who have come in for flak throughout the tournamanent following a number of questionable decisions including Nikitin’s previous bout when most had Thailand’s Chatchai Butdee a comfortable victor.

“I came here to win Olympic gold. My dreams have been shattered now, but you know what? I’ve a big career ahead of me and these ones, they’re known for being cheats and they’ll always be cheats. Amateur boxing stinks from the core right to the top.”

On Monday, a below-par Katie Taylor lost out to Finn Mira Potkonen, despite many feeling the defending champion had done enough in three of the four rounds. The bout actually finished in a draw (39-37, 37-39, 38-38) but the judge who scored the draw had the casting vote and didn’t give the defending champion the benefit of the doubt.

That was enough to have Irish blood boiling going into Tuesday when, to cap it all, the decision to deny Conlan a place in the semi-final and at least Olympic bronze led to a furious response.

“It’s like Katie yesterday, it was a close fight but no way did she lose,” protested Conlan,

“Today, I thought I boxed the ears off him in the first round and the scoring went against me, so I had to go to his (style of) fight which I did. I outfought him and they were… it’s a shambles to be honest. I don’t even care what I’m saying now, I’m probably just blabbering on.

“I’m gutted from the bottom of my heart. I wanted to go back with a gold medal to Ireland. Now I feel like I’m going back as a loser. I’m not a loser, I’m a winner and today just showed how corrupt this organisation is.”

It’s hard to disagree with Conlan’s sentiments as he dominated the opening round,using the distance perfectly to land scores and get out of danger, yet somehow all three judges felt the wild swings from Nikitin were worthy of the nod.

It was almost ineveitable what was about to follow despite Conlan going to war in the second, opening a cut over the Russians eye and reopening a previous cut on the side of his head, while rocking him several times to tie the scores.

The third round was a little more even, but Conlan was certainly doing the better work and landing more – post-fight stats that shows he landed 10 times more than the Russian.

“Everone could see he won this, he won every round,” said Ireland coach, Zaur Antia.

“The tactics in the beginning were to make it a long distance fight and he did. The first round he was a clear winner, but then we saw that there was something not correct so we had to go to a close fight.

“That’s what happened as we knew he was down after the first round 3-0 which was terrible, unacceptable.

“It was now a different close-up front, but if there had have been correct scoring then he would have continued with the same fight (at distance). When they gave the first round his (Nikitin’s) way, I already knew the result was corrupt.

“We had so many close fight for our boxers. I have no criticism of most, but I have big criticism of Katie Taylor’s yesterday.

“I can’t say why, but everybody here says Katie Taylor was robbed and everybody is saying Michael is robbed. But then they (AIBA) will say they gave the second round to Michael as it makes their decision look easy , so they will say they aren’t corupt. But he was a clear winner in that first round, I don’t know.”

Conlan’s father, John was as livid as his son following the decision and has said the 24 year-old will not box in an amateur vest ever again if he has his way.

“I thought we won that fight clearly,” he said.

“First round, we destroyed the guy. Middle to long distance was the plan. I don’t know what kind of fight the judges are looking at. I can’t even speak, stinking.

“I’ll probably lose my job over this but I don’t care, he’ll never box amateur again if I’m anything to do with it. Why should he?”

Those sentiments were echoed by Ireland High Performance coace Eddie Bolger who feels the O’Reilly saga may have played a part in some of the decisions against the Irish team.

“I thought it was a boxing lesson in the first of boxing and moving,” he said. “But then we had to go to war and try to take it out of the judges’ hands. I thought he won clearly.

“Something is afoot and maybe the media need to do more to highlight it.

“Maybe we embarassed AIBA at the start (due to the Michael O’Reilly saga) and now we are getting punished for it.”

There were calls after for the Irish Athletic Boxing Association to do something about what will rank as one of the biggest scandals in Olympic boxing for many years, but given that AIBA withdrew the option of appeals before these Olympics, there seems little room for manouvre.

A statement from the IABA read: “We do not have an option to appeal decisions at the Olympic Games. IABA do however believe that in light of events in Rio, it is in the best interests of amateur Olympic boxing that the scoring and judging process is reviewed. We will look to work with other national federations and AIBA to ensure that this happens.”