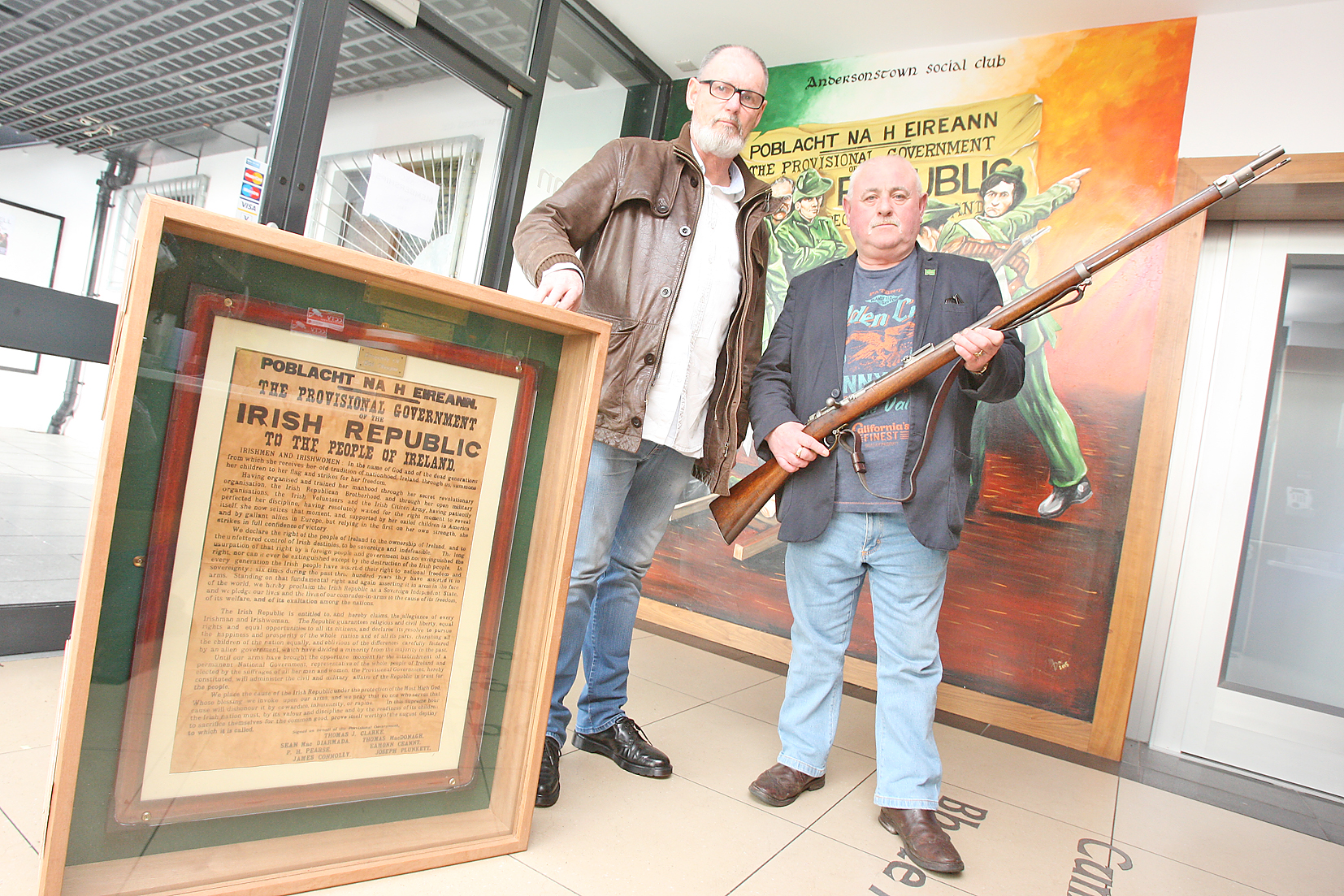 A STAGGERING array of authentic artefacts from 1916 is set to go on display in Belfast next week – for one day only.

The groundbreaking event at the Andersonstown Social Club (PD) on February 6 is a unique opportunity to see the collection in one place for the first time in history.

The remarkable exhibit is part of a weekend of events in the district marking the anniversary of the 1916 Easter Rising – and is surely the most fascinating.

We were invited this week to a preview of just a handful of the hundreds of items that will be on display here next weekend before they travel to Dublin for a 33-week national exhibit at the Ambassador Theatre.

A door handle taken from the GPO during Easter Week 1916, bayonets that were used in the GPO and authentic proclamations are just some of the pieces that Lenadoon man Pat O’Hagan has amassed since he began collecting in 1967, influenced by his grandfather. He talked us through the items, giving us an intriguing taster of what will be on show next weekend.

“I have an 1871 single shot black powder Mauser rifle that belonged to Thomas Clarke, it is one of three from the Asgard brought in by Molly Childers and Mary Spring Rice that will be on display on the day.

“I have a door handle from the GPO that was taken during Easter week in 1916, half of a Proclamation that was used as evidence in the court martials of volunteers including Pearse and Connolly, a Luger pistol that was given by a German officer to the Irish Brigade before the Rising, a C96 Mauser machine pistol, known as a Peter the Painter, and material from Frongoch including a book belonging to Michael Staines, who was Quartermaster general in the GPO in 1916.

“I have plenty of Fianna Éireann material, including uniforms, medals, membership cards and weapons. People can also expect to see plenty of paraphernalia from Cumann na mBan.

“My pride and joy is a bayonet that was picked up outside the GPO by a soldier and kept as a memento. I had been trying to get it back home to Ireland from England for years and finally got it in 2006.”

Clearly Pat is an avid collector and he is very much looking forward to sharing his collection with the public.

“This has been a hobby of mine for decades,” he said. “I used to go around the country visiting old IRA men and republicans from 1916 and the collection grew from there.

“I have saved this stuff my whole life and I’m proud that it will go on display in West Belfast first. It’s an exciting year and I’m glad I will be able to share these items with those who are interested.”

Given the authenticity of the items and interest in all things 1916 this year, the display is expected to garner huge attention from across Belfast and beyond. Seán Lennon of the Upper Falls 2016 Committee, which has organised a series of events for the same weekend, as well as other commemorations throughout the year, says it is an unmissable opportunity for everyone – young and old.

“This exhibition is part of a weekend celebrating 100 years of unbowed and unbroken republican resistance,” he said. “It is a unique opportunity to see all of this material under one roof for the first time and will be the only opportunity to see it in Belfast.

“I would encourage anyone with an interest in Irish history to come along and see these authentic artefacts on the day. I would also invite young people in our community who have a vague understanding of 1916 to come along and learn more through these fascinating items.”

Sinn Féin MLA Rosie McCorley will open the exhibition at noon on Saturday, February 6 and at 1pm a local drama group will be reenacting the funeral of O’Donovan Rossa. The exhibit will run until 6pm and admission is free.