Only one Black Man put on a pedestal 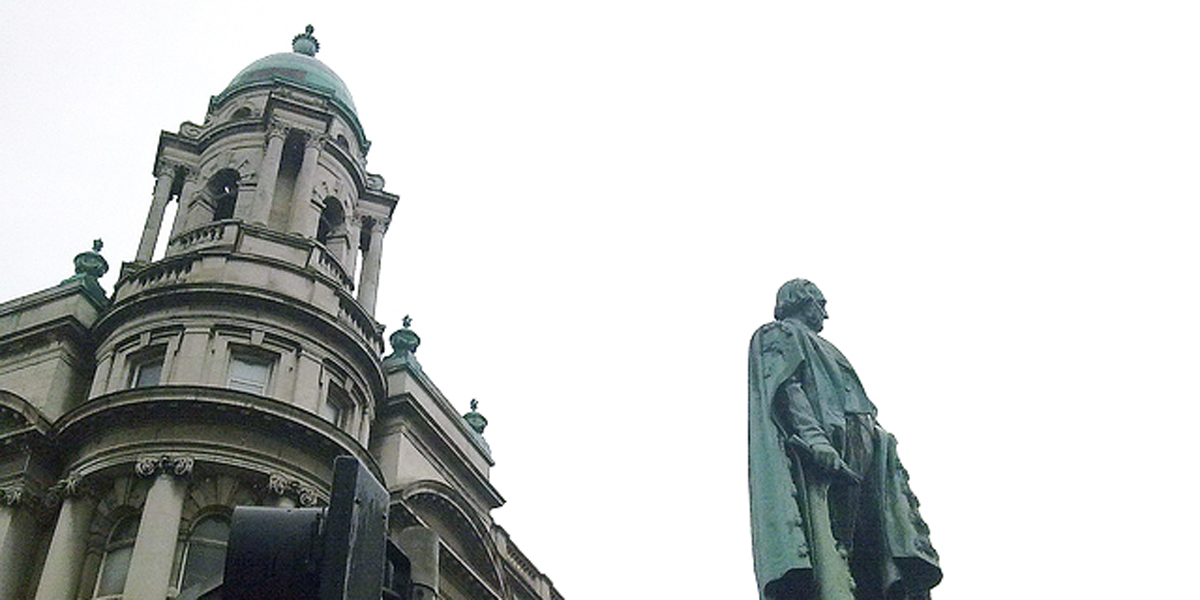 The statue of the Black Man in Belfast city centre

I mentioned the statue widely known as The Black Man last week. The title, The Black Man, is a misnomer in more ways than one, not least that the copper edifice has long become a murky green colour.

Some historians say that Belfast has, in fact, two black men while others say that at the end of August there are thousands. But let’s stick to the statues. The edifice which depicts the present "Black Man" statue, its back turned to the Academical Institution, is the noted Evangelical Presbyterian minister Dr Henry Cooke (1788-1868). So opposed was he to the religious tolerance advocated by the Unitarian-leaning Academical Institution that his many followers saw additional significance in the fact that SF Lynn's 1875 statue has been positioned so that it looks down Wellington Place, scorning (as it were) the institution with whose principles of tolerance Cooke so rabidly disagreed.

The College Square East of Belfast Metropolitan College is formally known colloquially as the 'Black Man Tech’. The statue of Cooke is not marble, but copper, like most other architecture around the city of Belfast around the same time. Due to exposure to the elements, most of these statues and domes around the city have oxidised, producing a green colour of copper oxide, especially noticeable on the nearby City Hall.

On 1st November 1855, an impressive ceremony took place when there was unveiled in College Square in front of an impressive platform party and a congregation of thousands of people a statue of the Earl of Belfast, fashioned by a native of the town, Patrick McDowell. The ceremony was conducted by the Lord Lieutenant of Ireland, the Earl of Carlisle. The tribute to Lord Belfast was well deserved. Frederick Richard, the only son of the Marquis of Donegall was born in November 1827 and died at the young age of 25 in Naples in 1853. From his early boyhood days spent at Malone he displayed extraordinary talents in literature and art. His literary productions were admitted to the columns of the Edinburgh Review, the leading literary publication of the time. He was also a cultivator of music and a composer. He was president of the Belfast Classical Harmonists’ Society taking part in their opening concert in 1852. Unlike most aristocrats, Lord Belfast devoted many of his talents to the cause of the poor.  Funds raised from the sale of his early musical works were given to the relief of citizens of Belfast affected by the famine in 1847 and he became patron of the Belfast Working Classes’ association and worked incessantly on their behalf. He also associated himself with the foundation of Belfast’s first evening school, the Belfast School of Design and when Charles Dickens was unable to accept the honour of the official opening, Lord Belfast stood in. A God-fearing, pious man, he was cut down in the prime of his life and within three years his bronze statue was unveiled in front of the Royal Academical Institution.

For twenty years that bronze statue of Lord Belfast remained on its pedestal. It was a monument to public-spirited benevolence  making no appeal to sectarian or party feeling and was universally known in Belfast as The Black Man.

However, some bigoted members of the Town Council disliked it for these very reasons and a campaign to have the statue removed began. It was said that the statue was out of place, that it obstructed the thoroughfare and that the weather would deteriorate the bronze. At a meeting of the Town Council in May 1874 it was proposed by Mr Gaffikin and seconded by Mr Mullan “that it would be desirable to have the statue of Lord Belfast removed from its present site and placed in the entrance hall of the Town Hall.” An amendment asking for the statue to be surrounded by railings was defeated and as a result Belfast’s first “Black Man” disappeared from public view. It is now inside Belfast City Hall.

The real reasons for this action soon became apparent. Six years before, a man who has been accredited with the rise of Toryism in Belfast, had passed away. This was Rev Henry Cooke, the antithesis of the Liberal Lord Belfast. Although a Presbyterian Minister he adopted the cause of the established church. While many of his brother ministers battled for the rights of the Irish tenant farmers, Cooke was invariably found in the landlords’ camp. He had no sympathy for the plight of Catholics – he opposed the ringing of the church bell at the new St Malachy’s Church in Alfred Street.  He fostered sectarian feeling between Catholics and every Protestant creed and in his last major speech in Hillsborough in 1868 he declared the banns of a marriage between the Presbyterian and the Protestant Episcopalian Churches. His forceful personality ensured success in his despicable work which was now to be commemorated by bigots on Belfast Town Council.

The statue was duly erected and the statue became the focus point for many Orange parades led by the notorious Johnston of Ballykilbeg. In the same way in which Carnmoney Orangemen parade through Glengormley in June every year to “open the arch”. How do you open an arch?

The name “The Black Man” persisted. During the week I asked several friends, “WHERE is the Black Man? All of them could locate the statue. When asked WHO is The Black Man? Not one gave an accurate answer. Most of them thought it was somebody called Carson. So the question remains. Have we one or two Black Men? It could be argued we have none.

Meanwhile the traffic flows on.