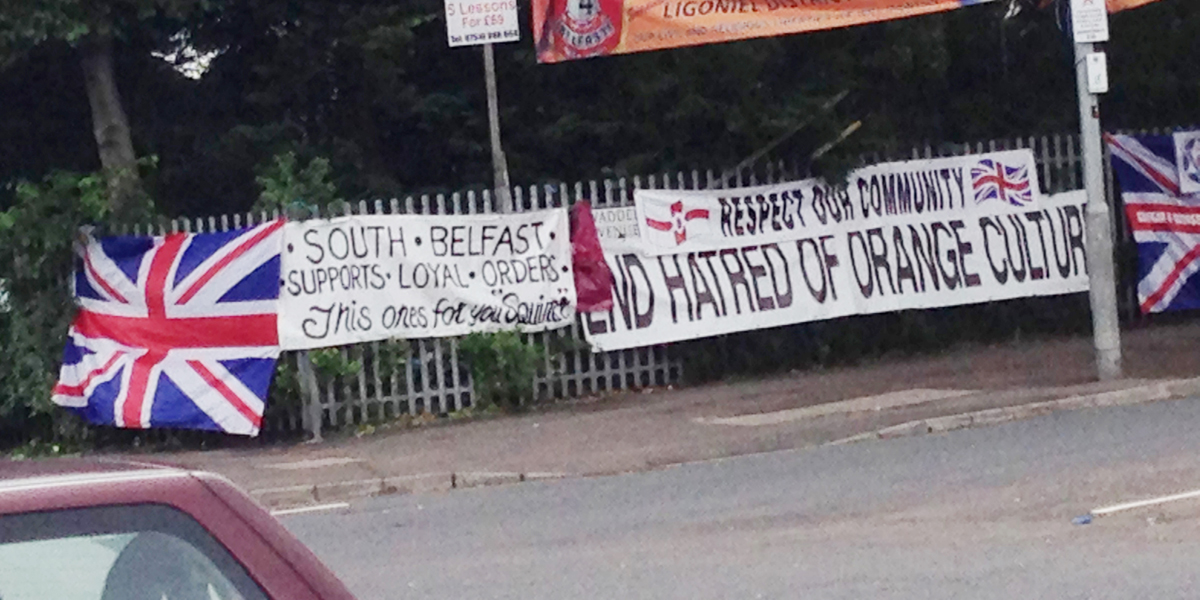 ALL Squinter did was highlight a fact. And that fact was that one weekend recently when Squinter visited the Saturday Woodvale protest the numbers were nowhere near the “thousands” reported on the BBC website.

It seems that hit a nerve in South Belfast, for last week a delegation from South Belfast triumphantly – if rather belatedly – marched to the protest camp at Twaddell Avenue to put up this banner (right), which reads  ‘South Belfast Supports Loyal Orders. This one’s for you Squinter’.

Squinter’s attention was brought to the banner by a tweet from the South Belfast PUP on Thursday evening. Strange kind of political party that goes around tweeting pictures of interface banners, but

chacun à son goût, as they say in Ulster Scots. Squinter spent an uncomfortable night wondering if the erection of the banner by person or persons unknown was some kind of sinister message, and so he pushed the settee up against the hall door, set a trip wire attached to empty tins on the back step and turned the Jack Russell loose to patrol the perimeter. And then he sat in the darkness with a hurley stick in one hand and an assortment of

miraculous medals in the other while the clock on the mantelpiece ticked away the minutes and the hours till daybreak. And as the first slivers of Orange light peeked through the dark clouds in the east, Squinter knew that his first job had to be to establish whether in fact a banner had been erected, or whether this was some kind of online loyalist lark.

A mixture of butterflies and adrenalin meant that Squinter couldn’t face a hearty breakfast, and so after a cup of milky tea and half a round of dry toast, Squinter got in the car and set off for his date with destiny. As he made his way down the upper Springfield towards the West Circular, the loyalists on Nolan were sounding even angrier than they normally do and for a second Squinter’s resolve faltered, remembering what had happened to his old pal the Lord Mayor when he visited the area with a large escort of Trevors. What dread fate lay in store for Squinter, alone and unprotected? In search of relief, he turned the station to U105 but Frank Mitchell’s loyalists were positively frothing at the mouth, so Squinter switched to Classic FM only to find The Flight of the Valkyries playing, and so it was that the final approach to Twaddell Avenue was made in radio silence.

And there it was, just as it had been pictured on Twitter, in all its loyal glory, in the middle of the protest camp beside a sign ordering that no drink was to be drunk in the camp by order of the ‘Camp Committee’ (Graham Norton and Julian Clary?). Two middle-aged women and a bewildered looking youth were the occupants of the camp, so Squinter decided to take his courage in his hands and have a chat with them, his decision being copperfastened by the fact that four cops were standing on the other side of the road. Parking the car on the Woodvale Road, Squinter was able to approach the camp on foot from a Proddy direction. Here’s a tape recording of the conversation that took place.

Female 1: Sound as a pound.

Female 1: I heard he works for the Andytown News an’ he makes fun of our flegs an’ all.

Youth: Aye, Ah saw him on Twitter. He’s about as funny as phlegm.

Squinter: What was he saying about you, sorry, yiz?

Female 2: He said our ones in Sandy Row cudden bather their ballix comin’ over here for till support iz.

Youth: Aye, an’ he was crackin’ on hardly anybody comes till lis here camp.

Squinter: Is there usually more here?

Youth: I saw of picture of that Squinter walt on the internet, so Ah did.

Youth: Is that him staunin’ over ’er beside le peelers?