OPINION - ELLY ODHIAMBO: Time to erect the statue of a real Blackman in Belfast 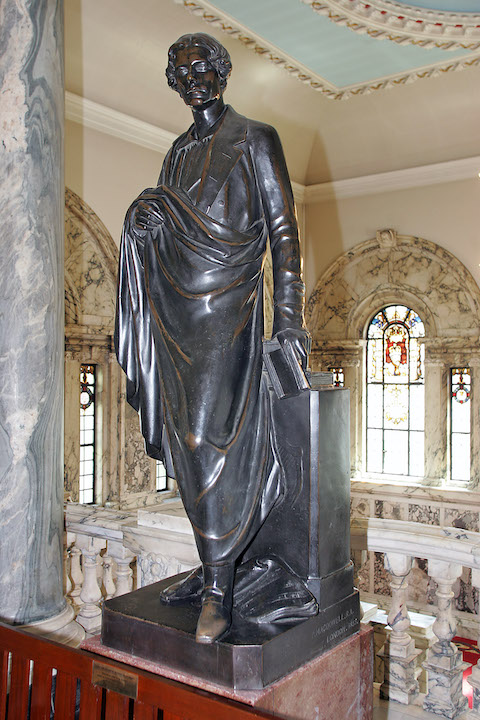 ORIGINAL The original Blackman statue which once stood outside Belfast Tech is that of Fredrick Richard, Earl of Belfast. His statue, which turned black due to weathering was removed to City Hall in 1906 where it still stands. It was replaced by the statue of firebrand Henry Cooke
This is weird. Last week I went to Great Victoria Street in the centre of the city of Belfast with one mission. There is a man standing tall opposite the 19th century Belfast Academical Institution. Locals call this grand statue, the Blackman.

A lot has been written about Henry Cooke, his confrontational intolerance of many faiths is one of them but we won;t get into that. It just happened that the same day I was taking pictures of this figure, other statues around the world were facing a backlash from protestors.

In Bristol, the one of brutish enslaver Edward Colston went down with a loud thud. It was like a weird telepathy. Did the Bristolians hear our cry? Yes they did and no slow clapping on this one. If this trend continues as we have also witnessed on our screens, American civil rights protestors with the support of their local governments, removing Confederate memorials and other symbols of hate, the world will start being a better place.

Curiously, a member of the public suggested something rather creative, that such statues after toppling should be salvaged and the remains assembled to build new ones of civil rights champions of the 19th and 20th centuries. I would put on that list Frederick Douglass, Frantz Fanon and living ones like Eamonn MacCann. Some people will not agree with this but I think a magnificent statue of Nelson Mandela, a real Blackman in Belfast, is long overdue. All stakeholders in the community should be consulted, this will be a very good thing.

The historian David Olusoga is urging Bristol to keep Colston’s body, the statue, in a museum. The toppling of it is now a celebrated historical event and this must be installed in a museum. The public have demonstrated that showing the middle finger to an ogre of statue is not enough. By the way if there was one monument that offends the most, it is the tradition of Empire, nothing nostalgic about it, for victims, whole tribes and nations empires must never happen again.


Mental health is going to be the next pandemic. If the powers that be do not step in quick and pour money, yes, fund this sector of health, many will suffer bad consequences. The joblessness crisis and slave wages will have a greater negative never seen before. Employers must wake up, honestly, this minimum wage policy over the years is cosmetic, it does not address poverty and will just continue making millions indifferent to job hunting. In this age of opposition to all forms of slavery, there is no way employers, trade unions and other chattering classes are massaging the weak and poor with hollow talk of wage rise.

In Luxembourg, a population of just under one million, the country has the highest minimum wage in the world, still small $13.78 compared to the UK’s tiny $10.34, so why do governments think this is fair?

It is because their argument is that the higher national minimum wages are increased the more difficult it is for the unemployed to get jobs because employers will not afford it.

So you are telling me that governments that spend billions on their armies and weapons cannot afford to pay better?

Just the last word on statues. If there is anyone who should be celebrating the fall of statues, it is Claire, an ex-girlfriend. She was French. We met at Magee College some 20 years ago. I have never seen someone who had the phobia of statues like she did. The statues –  particularly their faces – anywhere in Derry were an anti-climax and like throwing a red rag to a bull.

Our front-page picture shows the statue of slave trader Edward Colston being pulled down last week in Bristol.