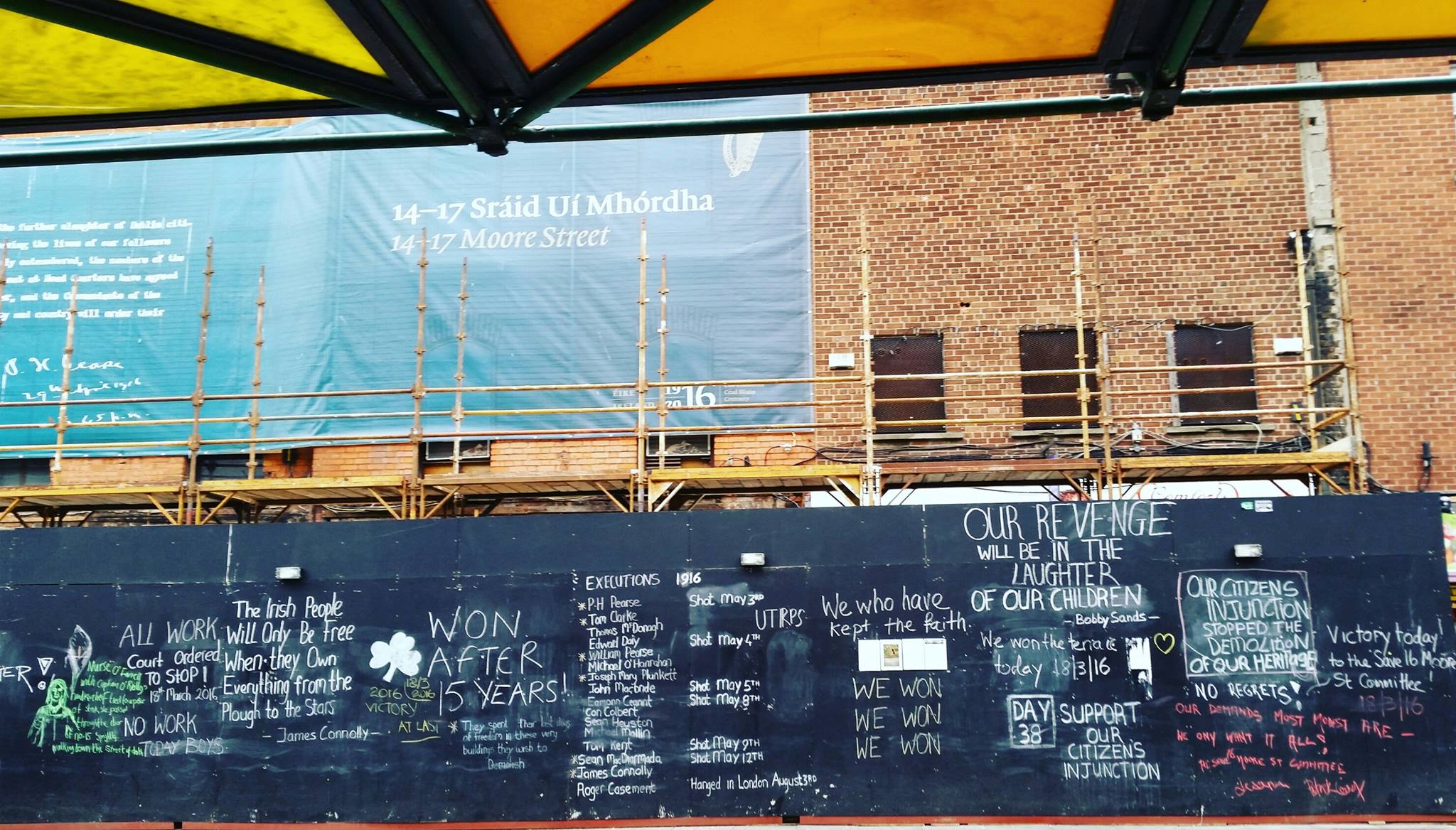 As we continue to commemorate these events, including in a few weeks the executions of the leaders, let’s look at the disgraceful way in which successive Irish governments have refused to preserve Moore Street and its part in the historic events of 1916.

So where is Moore Street? Moore Street runs parallel to O’Connell Street – or Sackville Street in 1916 – from Parnell Street to Henry Street close to the GPO. It is the location of the final meeting of the Provisional Government following the Easter Rising and the final meeting place of five of the seven signatories of the Proclamation. It is also where The O Rahilly – a leader of the Volunteers – was killed. The O Rahilly did not want the Rising to proceed, especially after the confusing cancellation order from Eoin MacNeill. However, when it went ahead so did he. “I have helped to wind up the clock. I might as well hear it strike,” he said.


So 104 years ago the battle around the GPO was raging. In other parts of Dublin republican volunteers were holding off significantly larger British army forces. On Friday evening, and with the GPO in flames, the embattled republican defenders evacuated the building. The O Rahilly was killed leading the first charge. As he lay dying in a shop doorway he penned a last note to his wife. Under constant fire his comrades later made their way to number 5 Moore Street – Dunne’s Butchers – and began tunnelling from house to house along the terrace.

The following morning they wrapped Connolly in blankets and with great difficulty carried him through the holes they had forced in the walls to number 16 – Plunkett’s, a poultry shop. It was an agonising journey for Connolly.

In a small room Seán MacDiarmada, Pádraig Pearse, Joseph Plunkett, James Connolly and Tom Clarke discussed the limited options open to them, including the possibility of rushing the British army barricade on Parnell Street. Clarke, who went to look at the situation, returned to tell the leaders that it could not succeed. The leaders came to the reluctant conclusion that surrender was the only choice open to them to avoid further loss of life.

Julia Grenan, Winifred Carney and Elizabeth O’Farrell had stayed throughout Easter week in the GPO. O’Farrell was now tasked with the dangerous responsibility of going to the British lines. According to the book ‘Last Words’: “When Seán Mac Diarmada asked Nurse O’Farrell to provide a white flag Clarke turned to the wall and broke down, sobbing. Miss Grenan and Miss Carney went across to him to try and console him but instead they themselves dissolved into tears and Clarke comforted them.”

I would like to thank the families of the executed leaders of the 1916 rising and their supporters for campaigning to save Moore street. It is a very important site in the struggle for Ireland's independence.
Its important that history is embraced, shared and understood. pic.twitter.com/oPIQjpCPFO

O’Farrell walked down Moore Street to the British barricade. She was brought by British soldiers to Tom Clarke’s shop in Parnell Street where the British General Lowe insisted that he would only accept unconditional surrender. A short time later Pádraig Pearse, accompanied by Elizabeth O’Farrell, and wearing his military overcoat and hat, left the Moore Street headquarters of the Provisional government to meet General Lowe. This meeting occurred on Parnell Street, opposite Moore Street, and close to where the Kingfisher Cafe now is. In the original photograph taken of that meeting only Nurse O’Farrell’s feet can be seen and in many of the reproductions they were airbrushed out.


After Pearse had signed the document of surrender O’Farrell was asked to deliver the surrender to the outposts which were still fighting. Shortly after 4.30pm the republican garrison left their Moore Street HQ and marched to the Gresham Hotel where they were searched before being taken to the Green in front of the Rotunda Hospital in Parnell Street. There they were harshly treated by their British captors. Éamonn Dore, a member of the GPO garrison, afterward wrote: “The night at the Rotunda was a bit of a nightmare and water and food did not trouble us. The officer in charge of the British military was a maniac. I saw Frank Henderson kneel to ‘relieve’ himself about day break and the officer snatched a rifle from a Tommy and struck him on the head, knocking him back on the grass... About five o’clock on the morning of the Sunday, after the officer had stuck Henderson, he took Tom Clarke, Seán MacDiarmada, and Ned Daly into the street near the Rotunda Picture House and stripped them down to their boots to search them... Tom Clarke had been wounded at the elbow joint and his arm was in a sling so that he could not get his coat off quickly. The officer pulled the arm straight, opening the wound and tore off his coat.”

This then is Moore Street. It is at the centre of the battlefield site. “The laneways of history,” according to former Taoiseach Enda Kenny.

In any other state in the world such places are preserved, open to the public, and are a place of pilgrimage. Ron Maxwell, a US filmmaker, describes it well. Quoted by the 1916 Relatives he says: “Battlefields are looking glasses into the world of our ancestors. Standing on their earth under their skies, is to be at one with them and to viscerally understand humanity’s connections across time. The generation that won independence lives in the ideas we honour, the architecture we preserve and the battlefields we can yet save.”

But not in Dublin.

14-17 Moore Street was adopted by the Irish government in 2007. Thirteen years later no work has begun. The four buildings are in a serious state of disrepair and are closed. The government ignored the recommendations from a consultative group several years ago and successfully appealed a landmark court ruling that Moore Street be preserved. It has pursued a short sighted policy which reduces the battlefield site to these four buildings. The rest are to be demolished as part of a redevelopment plan for the district.

Last year the Moore Street Advisory Group submitted its ‘Special Report 2’ to the Minister for Culture. That report drew on the recommendations of the 2017 ‘Securing History – the Moore Street Report’ which accepted that “there should be appropriate recognition of the history of the street and its part in the Rising”. Last year’s report called on the government to reconstitute the Moore Street Advisory Group with “representation from the Oireachtas, Dublin City Council, representatives of all of the participating groups on the present group, traders and an independent chair.” A year later and this report still sits on the Minister’s shelf.


Last month there was a fire at number 9 Moore Street which took three fire engines two hours to bring under control. The relatives of the 1916 leaders are concerned that this will not be the last fire and that without significant and speedy progress there is a real danger to all of these remarkable buildings. Thirteen years after 14-17 Moore Street was designated as a national monument and after years of campaigning the government continues to resist protecting the battlefield site. What the British army and its shelling of Dublin 104 years ago failed to achieve this government looks likely to succeed in, destroying most of what the National Museum has described as “the most important historic site in modern Irish history”.

So why does the government refuse to develop this site as a historic quarter which would be of huge educational, economic and social significance to the people of the inner city, the capital and the nation, as well as a fitting memorial to the heroism of the men and women of 1916?

Call me stupid but I don’t think it’s just because the state and the establishment are uncomfortable with the events of 1916 or their refusal to live up to the commitments of the Proclamation. That’s undoubtedly part of it. But it’s also because the vested interests, big business and the developers involved see this battlefield site as a potential source of great wealth for them. It’s all about corporate greed. In many ways the story of Moore Street is a metaphor for the state we are in.

If you want to save Moore Street write to An Taoiseach at leo.varadkar@oir.ie or the Dept of An Taoiseach, Merrion Street, BÁC 2.