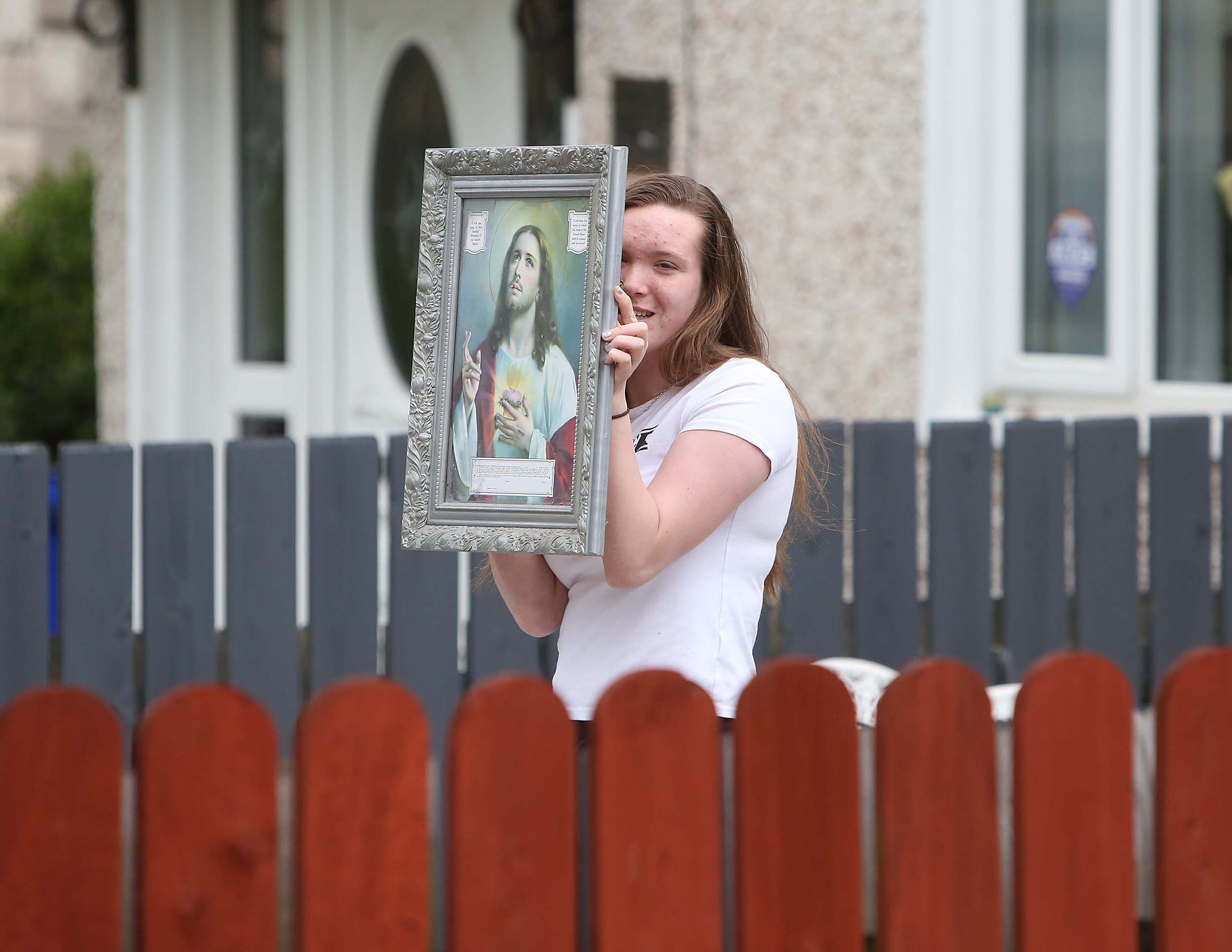 A resident of Springhill comes to her front door as the parish priest toured the area last week with the eucharist.
With signs that Covid-19 may have peaked, there is agitation in many quarters about opening up society and the economy again. When they do, will we be able to cope with what will confront us?

There are a number of things we’ll have to get used to. One is being poorer.

Some people, of course, were poor long before the virus showed up. But many of us have got used to an element of luxury in our lives, and that small cushion  in a post-Covid world just will not be there. Like what kind of cushion?

A cushion like holidays.  More and more people have become used to jetting off at least once a year to feel the warm sun on their back. But if you’re poor – and as a society we’re going to waist-deep  in poor – then holidays are one non-essential you can  dump. And  don’t worry about the airlines trying to seduce you into flying off.   Many of the them will no longer exist.

As a result holidays – especially for youngsters – may well revert to what they once were: a couple of weeks with your Auntie Maggie. It mightn’t have been exotic or far-off, but for a youngster, those holidays were kind of nice. They certainly provided memories that I’m not sure trips to Lanzarote or the south of France offer.

The horizons for big business will also shrink. All those trips  to different parts of the globe, so you could put in an appearance at a conference or check with the Australian branch of the company – that’s going to be a non-starter.  If we didn’t know before this, we know now: a Zoom meeting online may not be as good as a face-to-face, but it’s massively cheaper. Businesses that were just dabbling with video-conferencing will throw their arms around it post-virus.


As for health, expect to see your GP in the flesh a lot less than you’re used to. It always made sense. For years GPs were time-starved with each patient – that’s why they kept fiddling with their keyboard while you were talking to them. One of the big benefits of Zoom or FaceTime is that people tend to get straight to the point, and decisions are made with less faffing about. Your GP may or may not be virtuous, but expect them to be virtual a lot more in the future.

Education will find itelf in a similar situation. At a theoretical level, universities knew that they could and should be doing  a lot more of their interaction with students online, but like everybody else, they tend not to make big changes until they’re pushed into it. It’s not as if they haven’t a model. The Open University, maybe the most significant accomplishment of Harold Wlson’s political life, has been finding ways of working with students from a distance decades before the invention of email, let alone video-conferencing. What’s more, they’ve been producing high-quality graduates in the tens of thousands. So stand by to see the older, once-stuffier universities discover that lectures can be delivered online and lose nothing from so doing. In fact, they’ll gain in focus and in money not spent.

Even second-level schools will find that much work can be done online with pupils. Sure, they need to meet up with their friends and have social interaction as well as learn stuff. But huge chunks of the curriculum can be delivered through the internet. It’s just a matter of pressure to change, and schools are feeling that pressure right now.


Work, too. There are jobs, like construction, where attendance in person is a necessity. But look at all the people who found ways of working from home during the lock-down. Smart employers will extend and develop that, saving a lot of commuting time and leaving us all with cleaner air to breathe.

It’s also very probable that extended families  – some living thousands of miles away – will continue with the video-linking they’ve been enjoying during lockdown. Geography will no longer be the divider between people.

Post-Covid-19, we’ll not know ourselves.

Our homepage photo shows a resident of Springhill at the front of her home with a holy picture as Fr Paddy McCafferty toured the area with the eucharist.