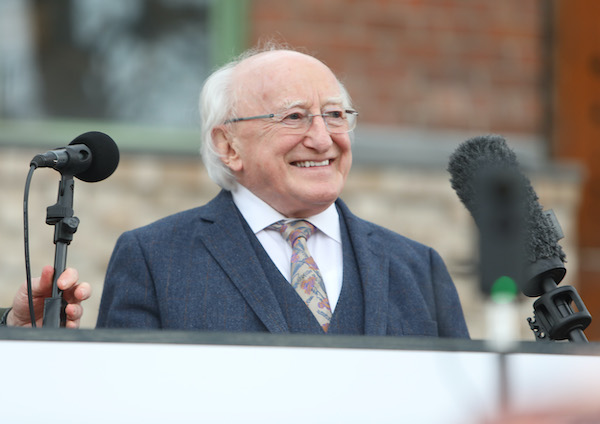 The people responsible for the flare-up are the clappers: you know, the people who stood outside their door Thursday nights and clapped the NHS workers.

Am I saying that NHS workers don’t deserve a clap?

Of course not – but I don’t want a clap substituting for a suitable salary.

President Michael D Higgins was on about this when he was interviewed recently by Ryan Tubridy.

The Irish president, being a Labour Party man, did the interview beside a sculpture of the Starry Plough.

He drew attention to the “essential workers… the people who do the cleaning, the postmen who go from house to house. These are essential workers, society couldn’t function without them… We need to follow through and look at how they are remunerated, their security and the conditions they are asked to work in.”

President Michael D. Higgins has paid tribute to the vital contribution that #nurses make to our society, and the central role that they have played in the response to the Coronavirus pandemic.

I couldn’t agree more, Michael D. Covid-19 has had one positive effect: it’s jarred us into realising how much we depend on a whole range of people who are paid peanuts. But this is a matter that is easier to raise than to resolve.

Take a hospital. Clearly, if you didn’t have the doctors and the nurses, the people being brought to the hospital are in serious difficulty. So you might want to ask “Which provides the more essential help to patients: nurses or doctors?” Their pay would suggest we value doctors much more highly than nurses.  But aren’t the nurses as indispensable as the doctors?

And what about the paramedics – the people who bring you in an ambulance to the hospital in the first place? Often what they do en route makes the difference between life and death. Does their pay reflect that? Hardly.

And then there are the office workers attached to any hospital, and the cleaners who make sure conditions are sanitary, and the maintenance people who see to it that  the hospital building doesn’t fall apart.

President Higgins suggests that we need to look hard  at what they do and at their pay packet. I agree. You agree. Probably everybody agrees. The only thing is, how much is ‘proper remuneration’? And we haven’t even begun to look at the pay of people like postmen, shelf-stackers, grocery delivery drivers – all of them are vital, and if we didn’t have even a single category of worker, we’d all be up the creek.

There’s a huge irony lurking behind that by-the-Starry-Plough interview with President Higgins. He is urging us all to look again at the pay these vital people get – but he’s doing so in the gardens of Áras An Uachtaráin.

To say that the Áras is a mansion would be to understate things. And the president who’s recommending a second look at workers’ salaries, does he really need people to cook meals for himself and wife Sabina? Does he do the wash-up or do servants? Bring out the bins? Change the bed-linen? Nah. He does none of these things. Nor does Sabina, unlike all those workers. And he gets paid €249,014 each year. Unlike all those workers.

So let’s reimagine the past.  If in February Michael D had fallen and banged his head  on a marble floor, so putting himself out of commission for the past three months, would any of us have felt it in our lives? Nah.  Áras An Uachtaraín has ninety-five rooms. If Michael D was living in a house half the size of the Áras, would that be big enough for him? Probably – that’d still leave over twenty rooms each for him and Sabina. And does he really need a car as grand as the one he has? And does he need a chauffeur to drive his grand Rolls Royce?

I know arriving at a fair wage for everyone is a real brain-teaser, although personally I’d settle for having everyone paid the same amount.  In the meantime, why not  start at the top (hello Michael D, hello Elizabeth II, hello Donald J Trump). If these figures are supposed to represent the mass of the people, shouldn’t they represent us in their living conditions, their transport, their yearly salary? And shouldn’t people like Michael D, living in real, waited-on-hand-and-foot luxury, lead by example rather than by pious, piping lectures?

There – I’ve given my mental itch the scratch it deserves. I’m feeling better already.