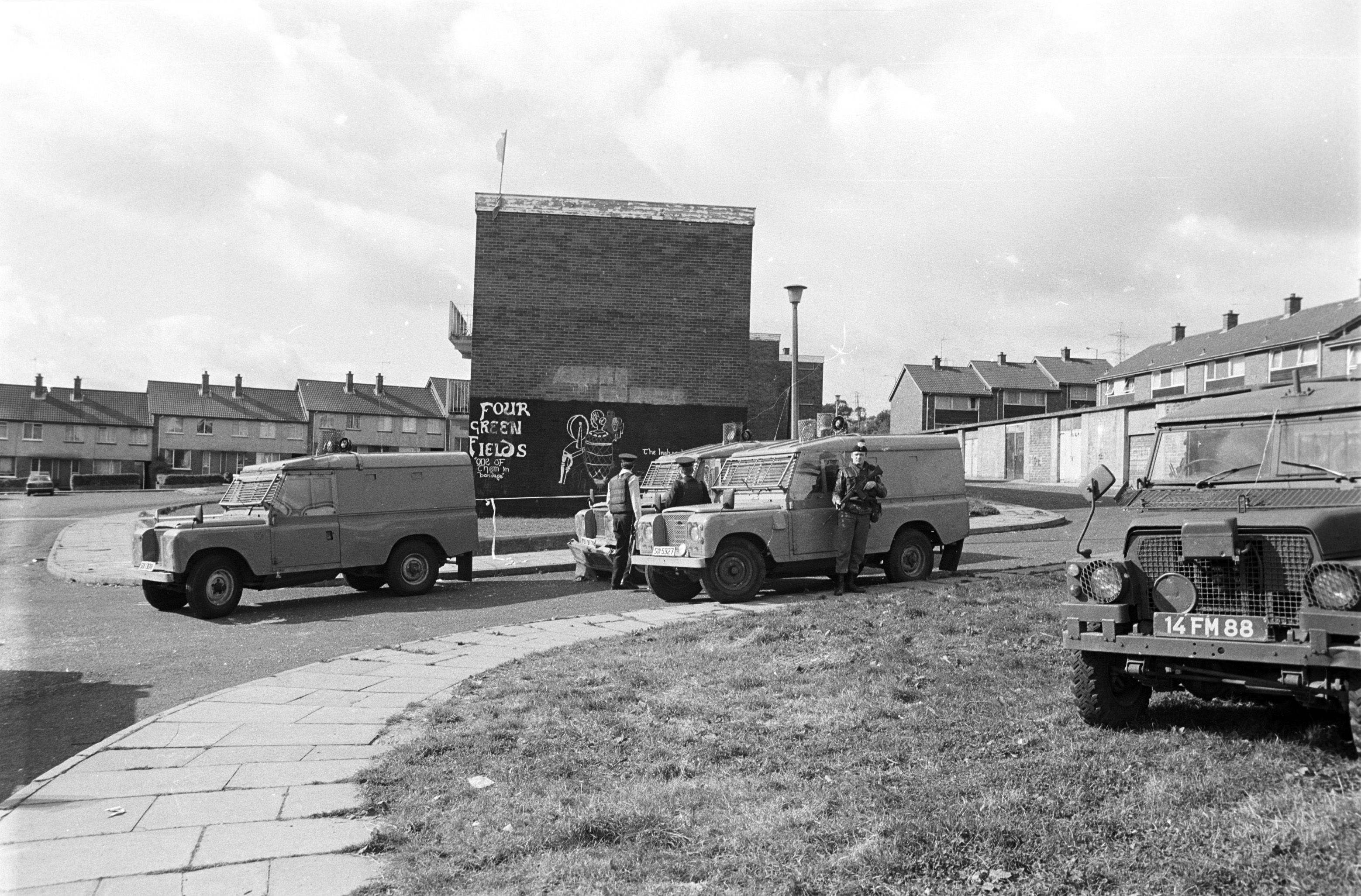 VOICES WILL NOT BE STILLED: Unquiet Graves revealed shocking levels of collusion between the British Army, RUC and loyalist paramilitaries. Pictured in 1981 is a joiint RUC-British Army patrol. Basil McLaughlin, Andersonstown News

Last week’s legal settlement heralded a small victory in the aftermath of last month’s screening of Unquiet Graves on RTÉ 1.

While the film was originally released onto the festival circuit in July 2018, the unionist backlash to the film had been fairly muted, albeit from various detractors on a number of social media outlets.

This tempered response came as a surprise following the agitated reactions within a number of unionist newspapers to the release of both 66 Days and No Stone Unturned. These attacks were characterised by a number of articles that preferred to focus on the actions of IRA attacks and questioned the logic of filmmakers in promoting a so-called ‘republican narrative’ at the expense of unionist victims and survivors.

Pressure was exerted on the BBC and NI Screen for daring to fund alternative stories that contravened the conventional and hegemonic view of the conflict, with DUP MP Sammy Wilson questioning if funding these documentaries was “a good way of spending public money” in order to “keep on stirring the pot about the past?”.

Of course, what we were witnessing was a tactical smokescreen in diverting attention from the real issues that were detailed in both films. To humanise an iconic Irish republican prisoner or to investigate the role of the state in the massacre of civilians at Loughinisland upset the established historical shaping of public discourse by broadcasters in Ireland.

Unionism had witnessed a major shift in how public information was now communicated; the emerging proliferation of digital and social media was bypassing the codes and conventions of broadcast protocols, encouraging the projection of narratives previously marginalised by the political mainstreams.

In the following two years the dissemination of Unquiet Graves saw the film grow from local advocacy screenings with victims' family members, to independent cinema releases, to a worldwide tour. These screenings were bolstered by the film’s digital release through major streaming channels, such as Amazon Prime, iTunes and Google Play.

But the coup de grâce for those vociferously opposed to the film was the news that RTÉ was to imminently screen the film and attempts were made by at least one unionist newspaper to dissuade the public broadcaster from carrying out its commitments. However, RTÉ stood firm, noting that the documentary had been through a rigorous examination process via the Editorial Standards Board and that all checks and balances had met their requirements. More importantly, the film would be screened without any editorial changes.

The response to the screening was immediate. The tempered reaction that was witnessed on the film’s original release was replaced by an orchestrated campaign to both smear and undermine the veracity of the work.

This was delivered with new levels of insensitivity to the grief of many of the victims of the Glenanne Gang.

The families now have ownership of their own stories, empowered by a dogged determination for justice. This historical record will not be undermined or hidden by any future British government and will be a lasting legacy to their loved ones.

However, what was instantly apparent was that there were no attempts to unpick or challenge the central thesis within the film, that a gang of RUC and UDR killers assassinated over 120 civilians under the protection and direction of the state.

Instead, the focus was on who made the documentary, the integrity of the whistleblower (a former RUC man) and inferences to dark money in financing the film. On 1 October, former Irish Justice Minister, Charlie Flanagan weighed in on the debate. In an unprecedented move, the Fine Gael TD for Offaly repeated, almost verbatim, unionist smears around the financing of the film.

No attempts were made to contact myself or raise any of these issues prior to the radio broadcast of his comments.

A right-of-reply was carried by the Sunday Independent in response to these repeated assertions where I clearly debunked much of what was being insinuated.

Amidst the furore of these orchestrated smears, not once was a duty of care given to the grieving families who were affected by the actions of the Glenanne Gang.

In many ways, the insensitivity shown had vindicated our reasons for making the film.

The families now have ownership of their own stories, empowered by a dogged determination for justice. This historical record will not be undermined or hidden by any future British government and will be a lasting legacy to their loved ones.