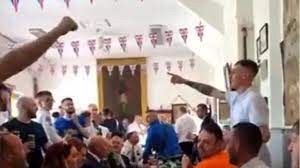 REFLECTIONS: Is it surprising that a state built on sectarianism remains sectarian 100 years on?

THERE can be few people who haven’t felt sickened by that video shot in an Orange hall, showing young men singing a mocking song about the murder of  Michaela McAreavey. Others in the hall can be seen banging the table in time or carrying on as though nothing out of the ordinary was happening.

This is what sectarianism looks like close-up: an eagerness to jeer at those who can’t defend themselves, a contempt for those of a different faith from you. It’s a poison that runs through our society, making decent relationships difficult and sometimes impossible.

What to do, apart from punishing those caught in the act? Experts in the field like Professor Duncan Morrow point to two areas in particular – education and housing.

“The expectations of ‘us and them’ have generated separate housing, separate schools and a legacy of discrimination and fear,” he said.

Does this mean that the problem of sectarianism is exclusive to working-class areas? Alas, no. When the Catholic middle-class began to move into the Malone area of Belfast, the Protestant middle-class promptly moved out to North Down and surrounding areas.
When around 100 peace walls are still necessary  at Catholic/Protestant interfaces, housing matters.

Education is the other area Professor Morrow points to as guilty of fostering sectarianism. The belief is that if little Seán is sitting in class beside little Norman during the day, he’s less likely to reach for stones or petrol bombs against him and those like him in the evening. And, of course, vice versa.

But education is a more complicated area than some voices calling for integrated education would have us believe. Tens of thousands of young people have graduated from integrated schools since 1981. Have you noticed sectarianism being diluted over the decades?

And maybe think of this too: If you’re reading this article, you were probably educated in a Catholic school. Do you believe you are sectarian? I’m willing to bet most of us would reply with an indignant “No!” Then how is it we seem to have escaped from the plague of sectarianism, while others are afflicted by it through schooling? My own experience over a thirty-year period has brought me into schools of all sorts – Catholic, Protestant, integrated.  In none of these schools did I detect the faintest whiff of sectarianism, spoken or unspoken, among the staff. So does separate education really mean sectarian education?

Two other points.
One is that it’s possible people enjoy living among those who have roughly similar religious and political views to themselves. It’s a bit like friendship groups – we like some people more than others because we have shared interests; we socialise with those who have things in common with us and avoid those we find less attractive. Is that sectarian?

The other is that religion is not the only dividing line running through our society. Class matters as much or maybe more than religious difference. If you’re a Catholic, which would you rather: That your daughter announces her engagement to a Protestant brain-surgeon or to a Catholic toilet cleaner?

Above all, let’s not forget those little ziggy-zaggy lines that represent the border. Those were devised solely on the grounds of religion – how best can we shoehorn lots of Protestants and considerably fewer Catholics into our new state of Northern Ireland?

If a state is built on a foundation of sectarianism, should we be surprised that 100 years of that state has failed to free people from sectarianism?