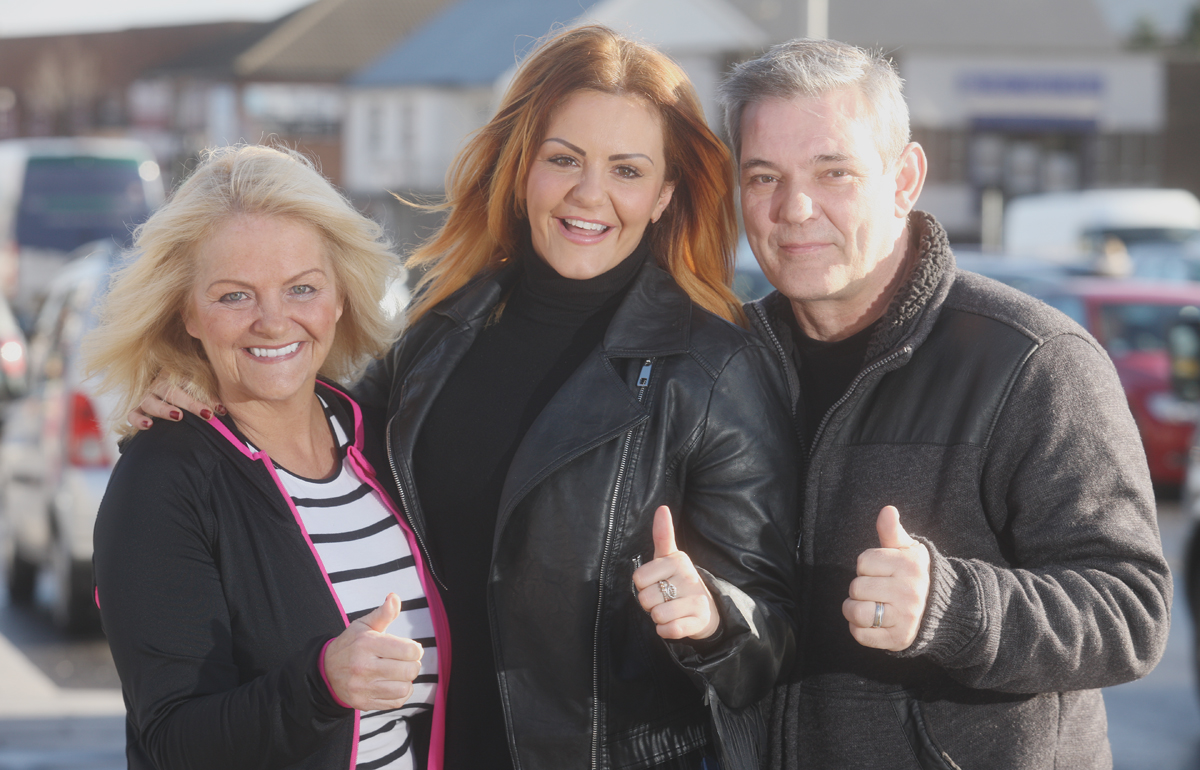 BELFAST singer Georgina Richmond is set to take the singing world by storm after wowing all four judges on The Voice Ireland at the weekend.

The talented mum of one sang her heart out with her amazing rendition of Beyonce’s song ‘Runnin’’ taking her one step closer to fulfilling her lifelong ambition of becoming a recording artist.

All four judges were impressed with Georgina’s voice with Rachel Stevens (former S Club 7) being the first to turn, followed by Una Foden (of The Saturdays Fame), former Westlife star Kian Egan then turned at the same time as former Blizzards front man Bressie (Niall Breslin).

Georgina is a former Belfast Media Group employee and was often heard singing at the top of her voice around the office, so before it all gets too crazy and hectic she called into her old stomping ground for a quick chat.

“I used to read through the papers every week and look at the What’s On and Buzz pages and say ‘Daddy, I want to be like them.’ That’s why I couldn’t believe it when I got my job in here at seventeen, and I really want to thank Máirtín and everyone who took a chance on me back then. It honestly helped my singing career – once people found out I worked here, they felt more comfortable booking me for gigs.

“It also helped working here knowing I could get a wee sneaky ad in the Buzz page or a line or two in the ‘What’s On’ pages telling people where I’d be singing that week. They really were the best years working for the Belfast Media Group.”

When asked about the reaction she’s has been receiving since the show went out she said: “My phone hasn’t stopped with people congratulating me and I can’t thank them enough. I’m honestly very touched by all the lovely messages I’ve received, it means the world to me.

“I was so nervous during my audition, I was shaking like a leaf, it was the fear of no-one turning round for me, then all four turned and I was delighted. It’s more than I ever could have hoped for.”

Sunday night was the first we saw Georgina on the show but she’s been keeping it under her hat for quite a while.

“It’s hard to believe that it was almost six months ago, I can’t believe I’ve been able to keep this secret for so long, it’s not like me!

“I got picked as a ‘Wild Card’. I applied online and had to go to the RTE studios and audition. Every week RTE pick someone as their ‘Wild Card’ and they picked me and put me through to the blind auditions, I was over the moon, it was the best feeling ever.”

“My daddy is my inspiration, he has been singing for years and I used to go and watch him as a child and I always thought ‘That’s what I want to do when I grow up.’ I just really want to thank him, if it wasn’t for him showing me the ropes and supporting me over the years I wouldn’t be where I am today.

“I can’t believe it, I’ve been singing all my life and I’ve tried so hard. I’m over the moon to have got through to the ‘Battles’ stage of the competition.”

Georgina has nothing but praise for coach Bressie. “He is such a lovely person, really supportive. He’s rung me a few times to make sure everything is going well with me and to make sure I’m not stressing out about the show. I’m delighted I picked him as my coach. He has looked out for me since day one.”

Bressie found success as the lead singer, guitarist and songwriter with pop band The Blizzards and also as a solo artist. He is no stranger to success, having won The Voice Ireland twice before with his contestants in series one and three.

Georgina is already well known on the local music scene and now she’s set to put her new-found wider fame to good use – already the offers of work have been flooding in.

The next stop for Georgina is the demanding Battle Rounds of the competition. But whatever the future has in store for the talented Miss Richmond, we can be sure that this is only the beginning for her in a long and successful career.