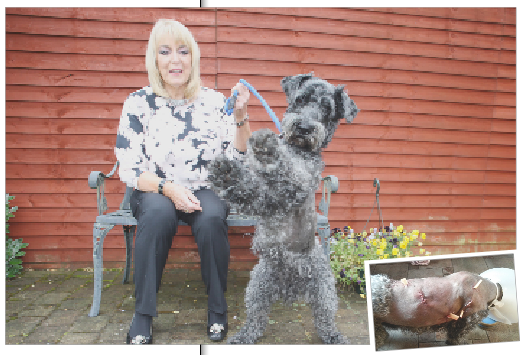 Sally with a recovering Darcy and, inset, the Kerry Blue after it was attacked in Castle Gardens

There are fears that a fearsome dog is out of control in North Belfast parks after another family pet was mauled by a Japanese Akita in an attack that bears close similarities to one we reported last week.
Antrim Road woman Sally Gardiner watched in horror as her pet Kerry Blue Darcy was savagely attacked in Castle Gardens. She feared she was about to lose the last connection to her late husband.
Darcy needed urgent medical attention to his serious wounds – including eight drips – after being set upon while out on a walk.
Sally contacted us to report the attack after reading our report of a similar attack by a Japanese Akita on the pet Jack Russell of pensioner Susan O’Neill while she was walking in Alexandra Park.
Concerns are now growing that the dog is the same animal – on both occasions it was off its lead but retrieved by its male owner who then disappeared without leaving contact details. And like Susan before her, Sally has real fears about what might happen if the dog attacks a child next time.
Sally described how she was thrown during the charge of the Akita which then ripped into her dog Darcy causing eight serious gashes and a number of puncture wounds before its owner finally managed to pull it away.
“I have never witnessed anything as vicious or as frightening in my life,” said Sally.
“Two things saved my dog’s life and that was its owner finally managing to pull his dog off before he disappeared and a resident who got us into her car and straight up to the vet.
“I lost my husband last year and Darcy is my last connection to him and I just thought, ‘My God, if I lost my dog in this way.’ You have to accept that natural things happen but this was just horrendous. These Japanese Akitas are trained to fight bears. A real concern is also what if it had been a child playing in a garden with my dog or if someone hadn’t have been there to restrain it.”
Belfast City Council confirmed that it is investigating two Japanese Akita attacks in North Belfast parks in the month of June.