Parents to act as night security at targeted school 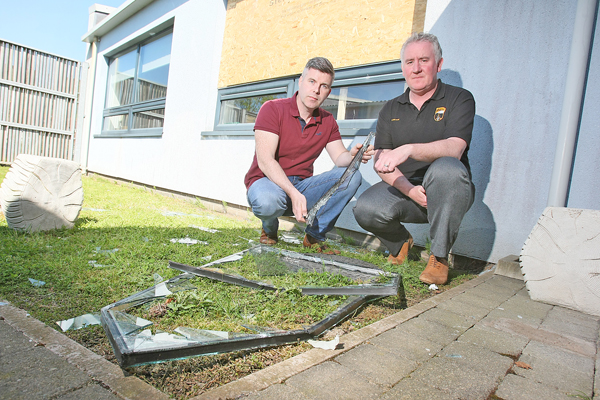 PARENTS and residents have offered to stay overnight at a West Belfast primary school to ensure the premises are protected from mindless thugs who have targeted it for the third time in four nights.

Ballymurphy’s Bunscoil an tSléibhe Dhuibh has faced a crippling series of break-ins since last Saturday night with Principal Pilib Mistéil saying he is at a loss as to why they are being constantly attacked. Now worried parents have offered to help.

Speaking to the Andersonstown News the morning after the third break-in on Wednesday, Pilib said: “Saturday night was the first break-in, they broke into the school minibus and took the tools, they then used them to break into the Naíscoil where they ransacked the office, anything that was locked was prized open and busted.”

Pilib added that the mess was cleared up and the school was secured by Sunday morning, only for it to be broken into again on Sunday night.

“The same thing happened again except in the Bunscoil office this time. They broke the main window and prized open all the cupboards and drawers. Again, they got nothing, however, they caused a lot of damage by wrecking the place and throwing things around.

“Each time this happens we are very vocal and visible on social media, the community have really reacted to it. The first two times they were concerned and wanted to know what they could do to help us, but now they are getting angry. They have been volunteering to help us and clean up and have even offered to stay in the school overnight in case these thugs come back.”

On Tuesday evening, due to the heightened awareness of the break-ins, a neighbour of the school spotted flickering lights in the premises when putting her son to bed and alerted Pilib.

“She rang me and I was here within 15 minutes but the damage had been done again. They’ve come back to an office they’ve already ransacked. They know there is nothing in it, so, what is their motive? They know they have a window of opportunity between the alarm being raised and people arriving.

“They may be leaving with nothing but they are leaving behind a very expensive trail of destruction. The glass they are smashing is safety glass, this has to be specially ordered and it isn’t cheap.

“We have just registered for our crèche. That has just come through and they have damaged both doors in that area, they will have to be replaced now. What are they going to find in a room where two-year-olds are? We just don’t get it. Do people think we have money in here because we don’t!”

While the Andersonstown News was at the school Pilib held a special assembly to try and reassure the children that everything was okay and that they had no reason to be worried.

“A child from the Naíscoil came up to me this morning and asked me if the bad boys had come back again. It was heartbreaking seeing the worry on an innocent child’s face. It shouldn’t happen, it’s not on.”

Sinn Féin Councillor Steven Corr called to the school to offer his support after each break-in.

“The people who carry out these attacks would have you believe that they are victims of society. That’s nonsense – they are running about wrecking and destroying and creating victims with their ridiculous actions.

“The staff here are shattered and the kids are afraid because the sanctity and security of their school has been compromised, their safe place has been violated.

“We have no doubt that these are young people coming in here and their parents need to be held accountable for them. This is a total lack of responsibility on their part. People need to know where their kids are. It’s complete failure on their part because they simply can’t manage their children.

He added: “We were in the City Hall on Tuesday night campaigning and fighting for the Irish language and equality and these thugs were succeeding in doing what unionists have been trying to do for decades, destroying a place of learning for our Irish language community. People from our own community are stamping all over the Irish language now, it’s disgraceful.”

There will be a march tonight (Thursday) in support of the school starting at 7pm. The parade is intended to be a parade of song, rhyme, poetry and laughter.

A spokesperson for the PSNI said: “We are appealing to anyone that may have any information or to anyone that may have witnessed any suspicious activity in the area over the previous days to contact police at Woodbourne Police Station on the non-emergency number 101. Or, alternatively if someone would prefer to provide information without giving their details they can contact the independent charity Crimestoppers and speak to them anonymously on 0800 555 111.”